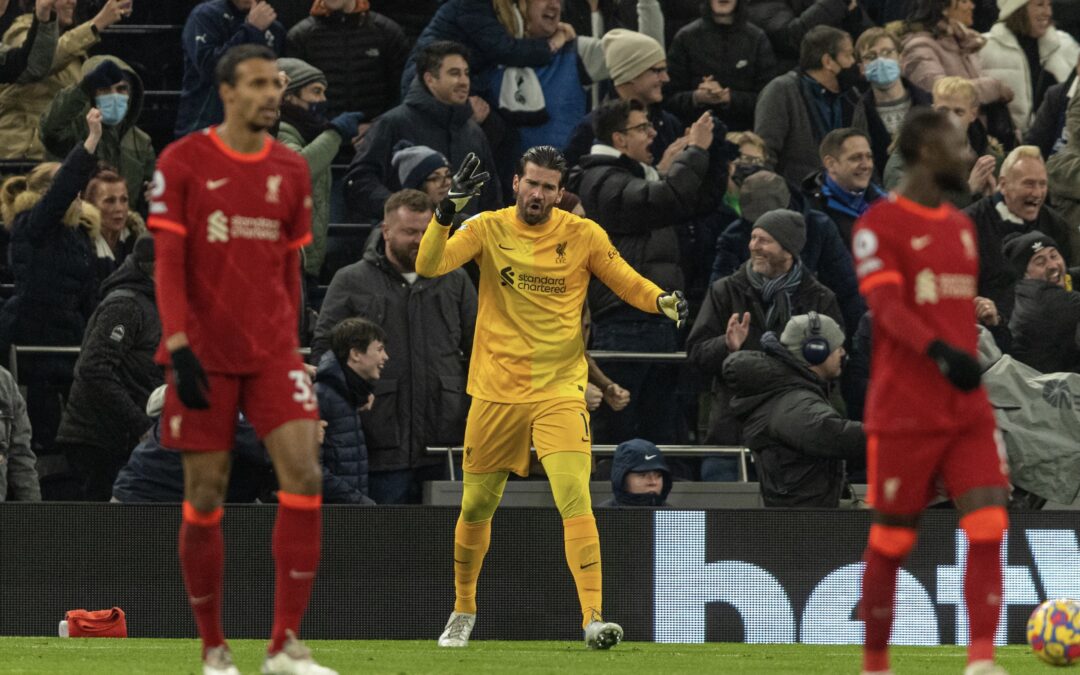 What a fella. That’s some save from Dele Alli. Unreal. And the one where Son was a mile off. He stands up so long it’s so hard to score against him. Unreal today.

Can you be man of the match if you directly cost your team the win, while simultaneously saving them a point? My head’s kettled, there.

Unlucky with the two, one left, one right where he twatted them. Two great saves.

Played really well and didn’t deserve to concede any really. Not his fault we were wild. Both centre halves are great there today.

Couple of great blocks. First half. Unlucky for their first goal, holding a good line and Robbo drops in and makes it look like he’s not well placed. Very good all game. Kane tried to get something out of him and got fuck all, just a yank on his massive tongue like a church bell.

Thought he was at fault for their goal. Bit harsh, but he drops when he doesn’t need to. Konate is holding a perfect line and Robbo drops in. Then goes berserk. Creates one, scores one gets booted in the head and then twats there lad. Off.

Can’t remember the last time we got someone sent off? Not used to it. VAR is wild, init? I mean it was a silly tackle, but in the context of what’s gone on I have no clue how they have decided to interject at this point.

Kane is an auld arse, isn’t he? Just stood on him for bits of the first half. Neat and tidy on the ball but obviously not offering the same protection on the break as Fabinho or Henderson who are frankly some of the best in the world. Probably needs to start scranning steaks so he juices up.

Got ahead of the ball a bit first half. Not an individual issue, more a structural one. We were losing the ball upfront and our midfield was unable to do what we normally do, in terms of winning it back on the edge and playing again.

See above. Not an individual thing but a structural positional weakness first half. That said, fuck me he gave it away a few times whereby they then legged it up the fucking pitch. Does well second half in the main, but carries on giving the fucker away.

He is wild, isn’t he? Couldn’t trap a bag of cement first half, then absolutely nods in a finish like prime Fowler, and should have had the most nailed on pen. Probably shouldn’t pass to him unless we are assisting him.

Does alright today. Had the full back on absolute toast first half, but drifted out of it.

Quiet day today, Mo. Couldn’t quite get in it today. Couldn’t get half a chance even.

Was excellent when he come on. Robbo being banned won’t be that much of an issue cause he is sound.