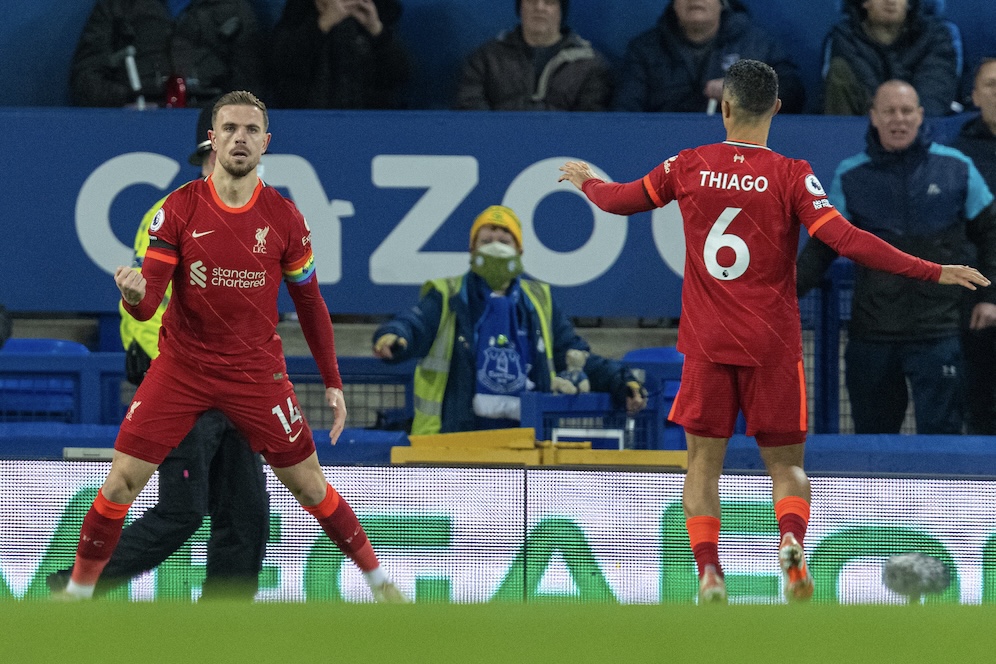 Ben Johnson’s player ratings after Everton 1 Liverpool 4 in the Premier League at Goodison Park, as Jordan Henderson stood out…

He passed the ball more than half their side. I mean, I don’t know this, if you want stats and that, listen to some cunt who knows what they are talking about. But he surely did, didn’t he? They didn’t fucking kick the fucker, hahaha. Had nothing else to do aside from the one on one for their goal. Volleyed a bottle off the pitch into their crowd. I mean, he didn’t mean it but still. Extra point?

That right side triangle of him Mo and Henderson just oozed class all game. Teams can’t compete with it when we get it right. The way they interchange, the ability to keep the ball in tight space. He was great tonight, Trent. Would have liked him to tell the Gwladys to fuck off as he was taking some of them corners, but he is a very respectable boy. Wild that he let Virgil take that free kick.

Thought he might have been at fault for their goal, letting Richarlison drift off him and not going with him. But then it added a little bit of peril, which just makes the whole thing a bit sweeter. Won every battle thereafter and is probably laughing his cock off in the changies as we speak. What a difference a year makes.

Kept passing the cunt to them first 20 minutes which was cute at first, like playing with the mascot in the warm up, until it wasn’t. Drops for their goal but I think Virgil fucks him a bit and he has no choice really to follow Rondon. Like Virgil, he won everything after that. Everything. Should score in the first minute, does a wild backheel like he was the buckaroo horse with his back to their goal instead of, I don’t know, fucking shooting.

Just looks re-invigorated. Full of beans. All of the fucking beans. All over the pitch, horrible like he is at his best. No fucker down their right had a minute’s peace. Great ball in for the early Salah chance. Got belted in the nose and had a nose bleed which was a bit mad. I had one last week, out the blue. Nothing as disarming as a nose bleed. Reckon I might be on my lazzies. Only thing worse than having an unexpected nose bleed would be someone breaking into your house while you were bollocko. Or having to fight with no kecks on. I’m not sure on the scenarios here but you know. Minding your own business, no kecks on, next minute all hell has broke loose and you are boxing. You are in a bit of trouble there.

Unreal midfielder. The best there is. He was everywhere tonight. Everywhere. That enforcer, that traditional enforcer that never needs to enforce with a moody tackle because he is so dominant in everything he does. His positioning, his balance, his fucking everything.

Got booked because the referee seemed to take real umbrage against him for being dead sound. Had so much time and space in midfield all night. The ability to just receive the ball and play it. Popped up all over the pitch and then went off for a nice sit down and a rest of his lovely muscles. Keep that midfield three available all year and we will take some fucking beating.

It is genuinely astounding to me that people think he is not a good footballer. Yer he is good for Liverpool because he makes others tick. No I wouldn’t have him over Pogba, over this that the other. And then you watch that performance and he is the best player on the pitch, and that includes the best player in the world. He was fucking faultless tonight. Tactically, technically, physically faultless. Yes he has all the attributes you want in a midfielder and a captain. But fuck me he is also technically brilliant. The goal, the assist. Easy for him. Was convinced the first was offside, not sure why. Didn’t celebrate until the camera cut back to the game and it had kicked off.

Was mad tonight, Sadio. On that knife edge between unplayable and shite again. I wanted more but he was still such a threat. Could have done loads better in a few situations. That said, his ability to rotate and find space is unreal.

Loved him getting as cob on with Allan and then calling him every cunt under the sun in Portuguese. Lose a Portuguese swear. What a finish, by the way. The little drag, leaving that little fat plodder with the English name for dead and slapping in above the weird guy with little arms and the serial killer haircut. Was great today. Dropped deep all day, rotated in with Sadio, kept the ball ticking over and then banged, again, from that inside left channel. Wow.

The finish for the first is ridiculous, really. Yes, Pickford is mad for it. Let’s leave him a massive gap to twat it into, but still, its by no means a forgone conclusion for anyone bar him. The curl on the ball. Chef’s kiss. Then the second, Coleman has about 50 grabs at him, like a fella falling off a cliff trying to save himself from a gruesome death, and Mo, off balance still finds the corner. Loved his interview afterwards, yes I expected him to make a mistake and he did. Hahaha. His all round ability though on that right hand side. Unplayable.

Forgot about him as an option and was fucking delighted when he came on. Yerse. This is just what this game needs.

Was sound when he come on.