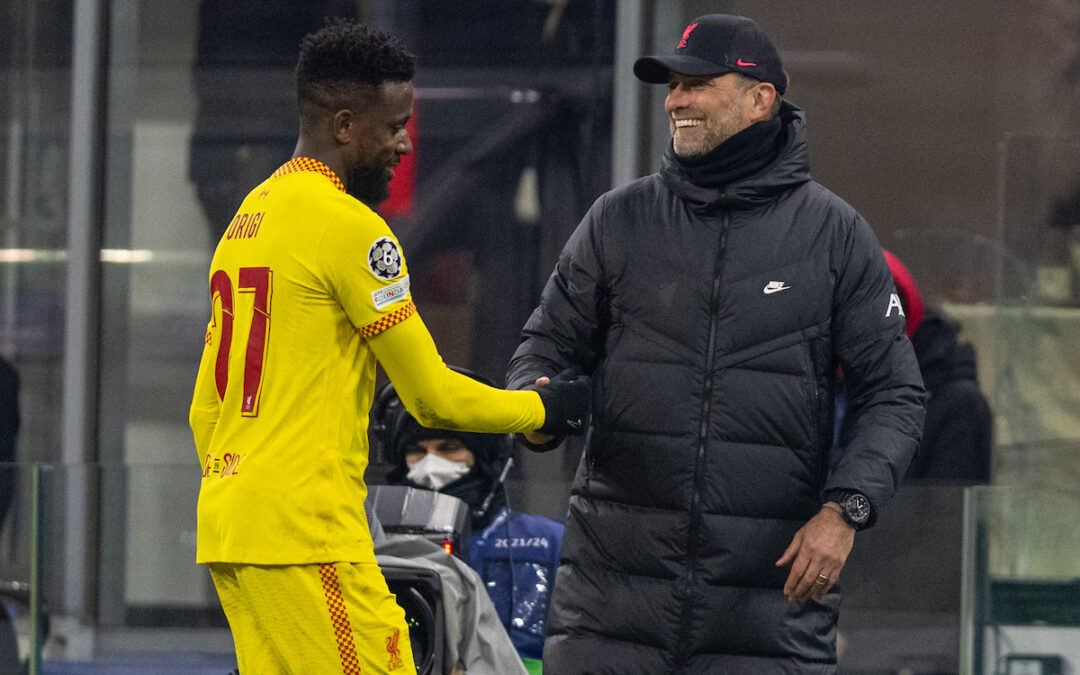 Couldn’t really do much about their goal, given that Minamino decided to just open a trap door right in front of his eyes. Nothing really to do and then makes that one-on-one save with five to go. So aggressive in those situations.

He really does not look out of place, which is wild really considering everyone wrote him off and wanted him fucked off in the summer, this knobhead included. And also given the fact we are playing away in the Champions League against the leaders of the Italian league in a game they had to win. Love the little right-wing diddle. Reckon The Reds win all five games or whatever during the African Nations 1-0 playing at least one reserve full back up front and then unleash Sadio and Mo after they have had a lovely time with their mates to romp us to league and Champions League glory.

Was really good, which shouldn’t be a surprise at this stage – or maybe it should, I don’t know. He is nearly madder than Div. That back heel turnaround Cruyff turn thing he did inside his own box surrounded by about 10 fellas was unreal. Marked that big silly Manc judo head out of the game which was sound.

He is so good on the front foot and so strong, it’s like watching a bit of a baby Virgil. You can see why we bought him. Unreal succession planning. The back four held a great line throughout.

The biggest compliment you can pay him is that we just don’t miss Robertson as much these days when he doesn’t play.

He is so exciting, honestly. He just oozes class. Not so much a destroyer as a deep-lying playmaker with great positioning. So good on the ball, so composed, so clever in his little movements. Sees the game all around him. Wow. He is going to be a superstar, surely. What a gang of fellas to learn from.

Got that ability to beat his man, drive and get a shot off back in his game, which is fucking sound to be fair. Great for the first, does really well to create something out of nothing. Pressed really well. Great energy throughout. Must be kipping in the spare room away from the baby.

Wild for their goal. Just let it go past him for a laugh. SURPRISE. Deal with that you cunts. Great energy but not sure he is suited to it in there really.

Ha ha ha, he is berserk him, isn’t he? Absolute maniac of a fella. Would love to watch him in his gaff just sitting off. A day off work. No training, no game, nothing. Just mooching in his. Striding round in his flat. Probably got a lounge coat on, silk. Fucking resting his feet on a fucking massive big cat. Possibly a stuffed one, a rug. Maybe it’s real, no teeth. Eating. Mad scran. Crudités. Having a break from his self portrait. Fucking 8ft x 8ft. Abstract. Maybe a load of half-finished jigsaws knocking about. The possibilities are absolutely endless.

Funny that stat that before tonight he had only scored three goals in the Champions League. Two in the semi and one in the final. Fucking sums him up that doesn’t it? A man when it matters. Like the fucking man from Delmonte. The Milk Tray fella. Fucking James Bond. Had some wild shots tonight which, frankly, I was fully on board with. His goal was fucking wild as well. Ball sort of popped out with no pace and he headed it like he had a fucking piston neck and Nat Phillips head.

Funny the way he just plays every game and never ever looks tired. What a finish for his goal. He is just so dangerous. Stupidly good.

Great play for Divock’s goal. Funny the way he always plays. What’s that lads, you had a full pre-season for the first time in four years? Watch me play you in every fucking game then you fucker.

Subs: All of them 7, every single one of them

Hundreds of the cunts come on. Fucking hundreds. Probably why we won. Did we cheat? Some sound debuts for some lids. Some other fellas legged it about, some others come on when their legs would have been well better up on Divock’s big stuffed cat. Boss how much Jurgen loves the Champs League dough. Hope he gives it all to Salah for a new deal.