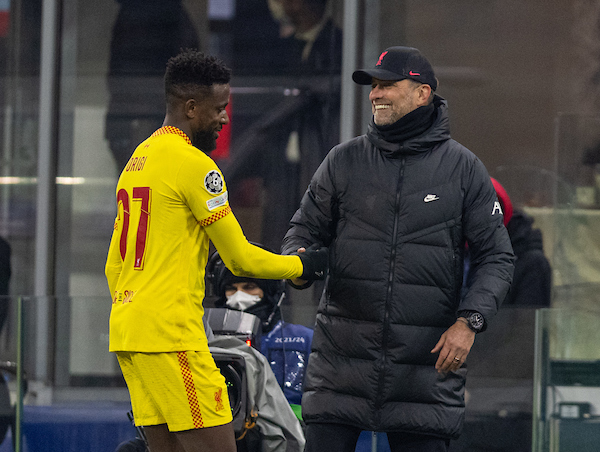 Our review of AC Milan 1 Liverpool 2 in the final group game Champions League group stage at the San Siro.

What’s covered in the show?

– Salah and Mane starting to those who don’t even travel quite the contrast/Why they’re in – manager mentioning defensively what they bring.

– Konate LCB/Ox right CM: Not just personnel potentially disrupting
– What Milan are doing tactically: in/out possession/set-pieces different to Anfield (noticed they had two central edge of box for our corners which is probably a result of Henderson/Thiago CL goals).
– Playing well and playing out well despite pitch. Their goal where we improve tactically: Offering more width and switches, Chamberlain grows after first 20.
– The perception of intensity, and Milan not matching Liverpool as if it was a choice. Influence of Pep, Klopp compared to say Jose/Rafa era. Is this what’s setting the PL apart beyond wealth and technical superiority? even middling PL clubs can only match our intensity for 20 mins tops.
– Second half restricting Milan. Keita and Gomez back shouldn’t be overlooked – Milner not even travelling says if he has a Xmas wish it’s to protect midfielders.