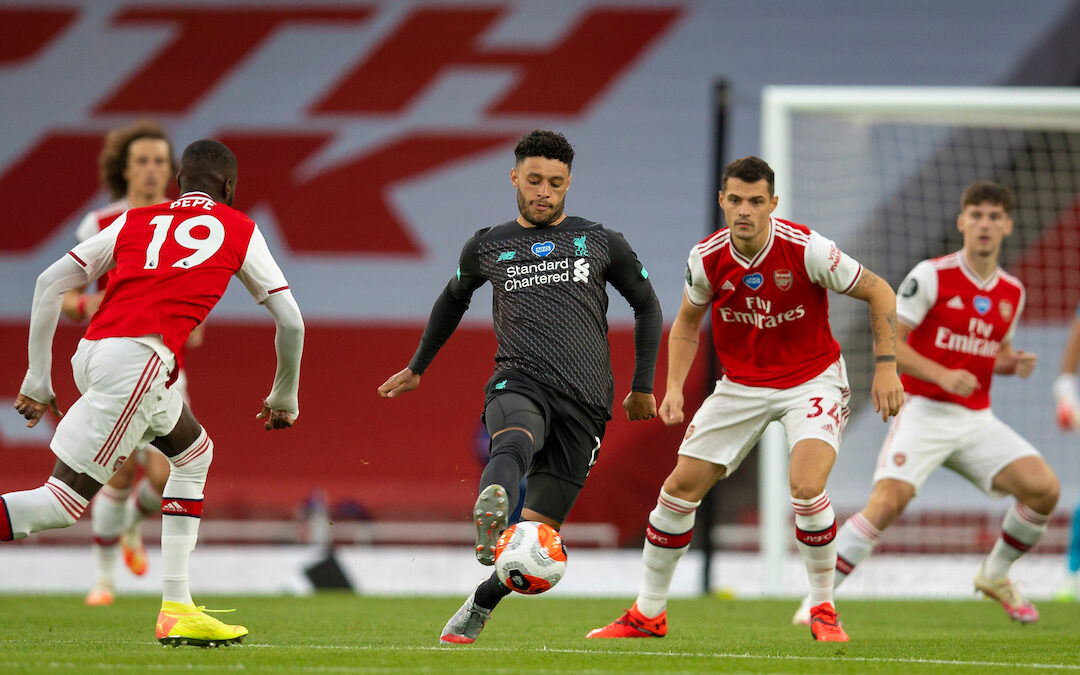 Rob Gutmann’s preview ahead of Liverpool v Arsenal at Anfield, with The Reds looking threadbare with injury issues in midfield…

THE Arsenal have provided rich red pickings in recent years. They turn up at Anfield. They concede goals. We all go home happy.

This time round though, things feel a touch more complicated. Arsenal started the season badly but have reasserted themselves and are enjoying a lengthy unbeaten run. Liverpool’s own significantly lengthier unbeaten stretch came to an end in east London a week ago.

Liverpool’s injury roster is also again repopulating in a wearily familiar manner. We have few men stricken with any real long term afflictions but we are losing new bodies by the week.

The club’s official site celebrated the news of Sadio Mane not having been sufficiently hurt on international duty to be at risk of missing the Arsenal game, with one of their chirpy ‘you love to see it posts’. We do indeed love to see a big player like Sadio looking happy and fit, at all times, but it comes to something when we’re forced to ‘celebrate’ not losing yet another body.

The training photos promoted by the club also showed Jordan Henderson, James Milner and Harvey Elliott returning to ‘outdoor training’, but none are likely to be fit enough to feature this weekend.

Jurgen Klopp’s team for this weekend is dangerously close to picking itself. It looks like Andy Robertson is out, yet another recent hamstring strain victim. With Naby Keita, Bobby Firmino and James Milner all also out with similar injuries, questions may need to be asked about strains being imposed on overworked limbs. 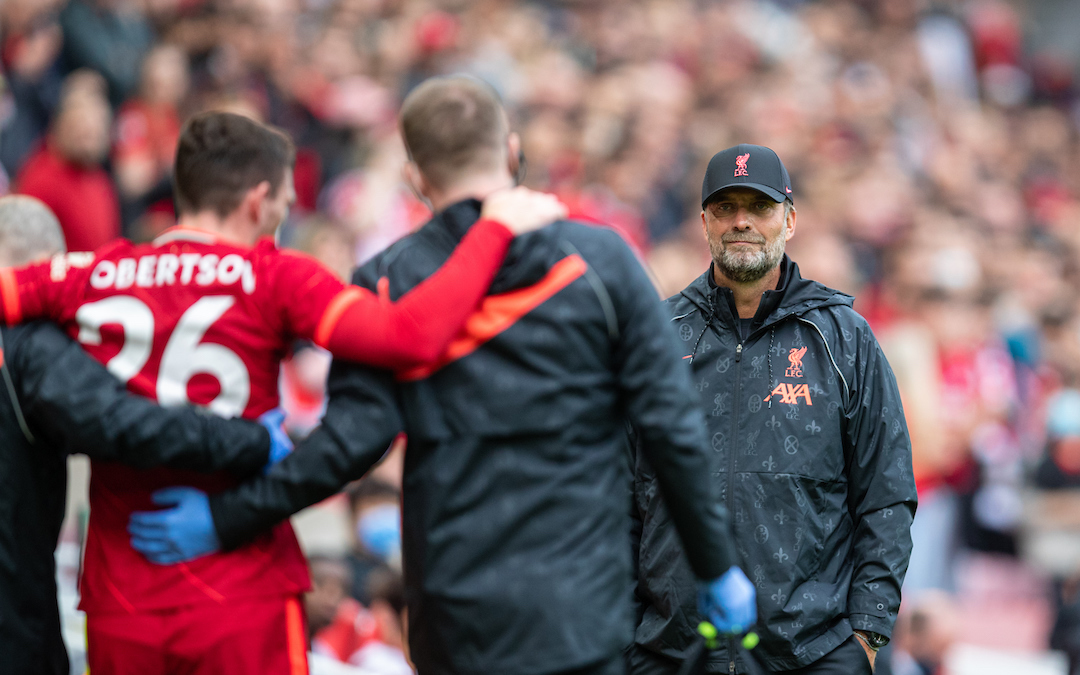 With available personnel dwindling, Klopp has some difficult decisions to make in terms of selecting sides that can retain freshness, not be overworked and at risk of further injury, while simultaneously trying to win football matches.

In the week ahead are three home games. One is the dead rubber in the Champions League against Porto. As things stand, those that can feature against Arsenal must not be risked in midweek.

Kostas Tsimikas should feature against The Gunners on Saturday. His stock is growing and he enhanced his credentials with star performances for Greece during the international break. The rest of the defence will surely be Klopp’s usual first pick lads — Trent, Joel Matip, Van Dijk and Alisson.

Alisson and Fabinho both featured for Brazil against Argentina on Tuesday night and have enough recovery time between then and Saturday to safely assume that the manager will consider them available for selection.

Liverpool’s only fit first team squad midfielders are Fabinho, Thiago and Alex Oxlade-Chamberlain. First reserve on the bench will need to be 19-year-old rookie Tyler Morton. Tyler is a good prospect but it’s a sign of injury ravaged times that his full Premier League debut may be imminent.

The currently missing midfield men are Jordan Henderson, Naby Keita, James Milner, Curtis Jones and Harvey Elliott. It would be handy if just one could make full first team training by Saturday. 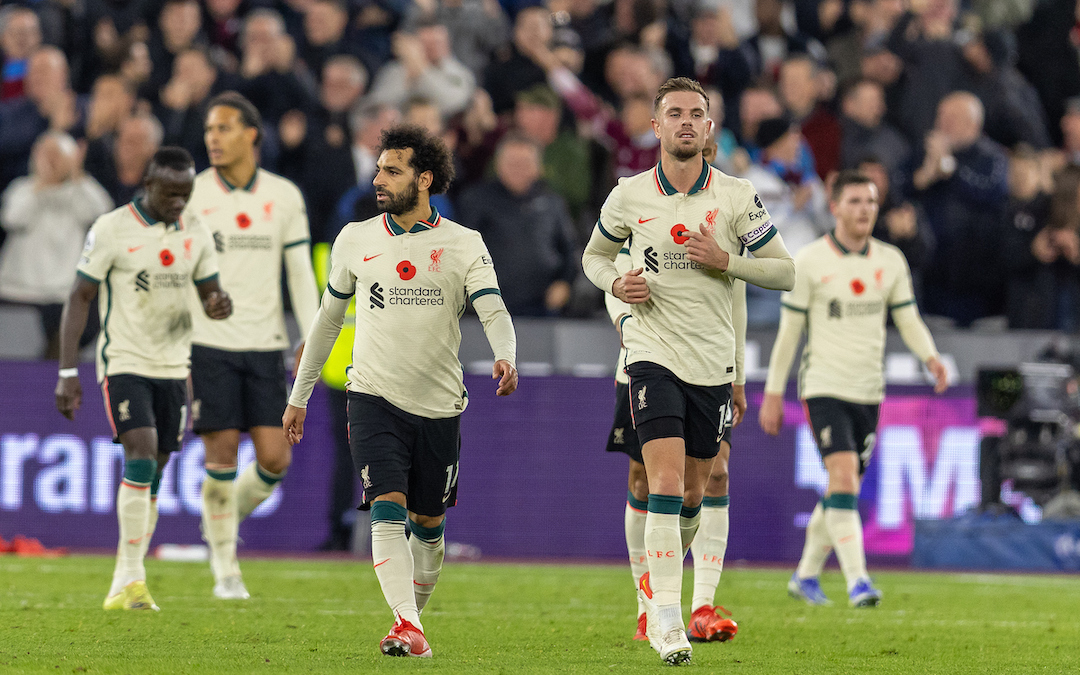 Arsenal will be missing Granit Xhaka, but he’s not very good anyway. They could also be without Thomas Partey and Pierre-Emerick Aubameyang, which would be nice. The Gooners aren’t tearing up any trees but they are quietly rebuilding confidence. Don’t expect them to try and go toe to toe with The Reds, but they do have the quality to make things happen for themselves on the counter attack.

Arsenal are opponents that Liverpool have really enjoyed at Anfield in recent years and the team Klopp will send out will be more than strong enough to put the resurgent north Londoners back in their box. I think Arteta will come for a point and try and focus his men on frustrating Liverpool. In theory, at least. It is a tactic which is anathema to both manager and his players and may be a game that simply doesn’t suit 2021 model new Arsenal.

Liverpool would rather Arsenal reverted to type and attacked them. If it’s to be an open, free-flowing, attacking feast of football, The Reds are more than equipped to win any turkey shoot. Klopp’s resources may be overstretched but most of his fire power is still very much available and in form.

I won’t say I can’t see past a Liverpool win because this has been a season of surprises, but on paper at least, Arsenal are opponents Liverpool want just right now.

“Smith Rowe and Saka are dangerous on the counter and I think Arsenal will try and be compact.”