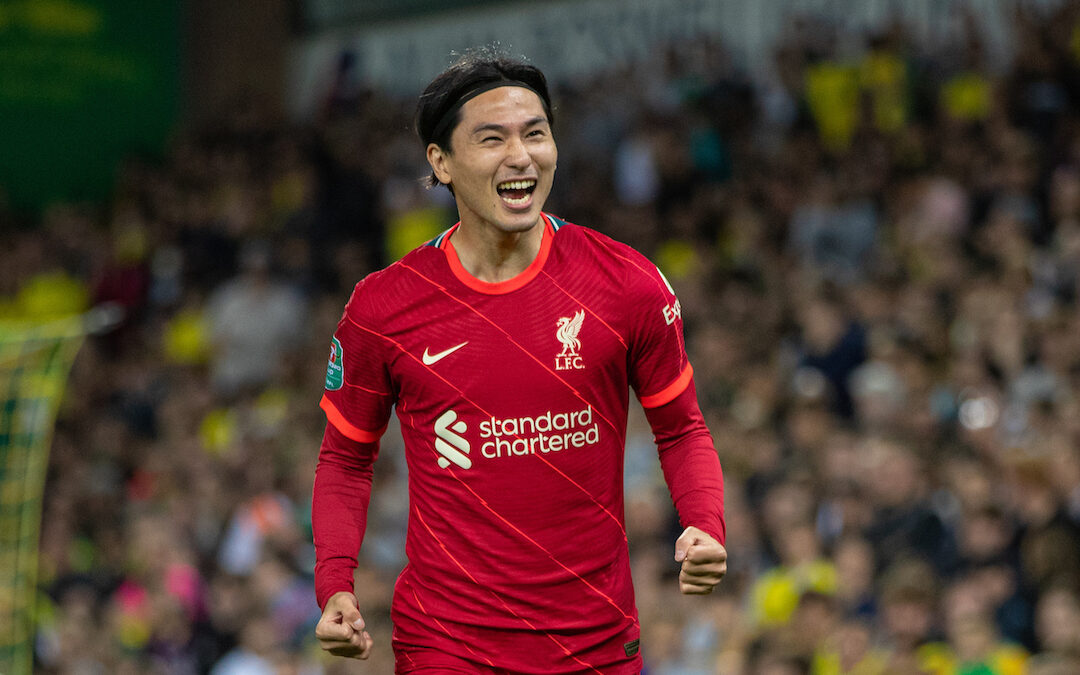 Ben Johnson’s player ratings after Norwich City 0 Liverpool 3 in the League Cup at Carrow Road, as Minamino and Origi grabbed the goals…

I’LL be honest with you. I had the best of intentions.

Seriously. Set the Sky+ to make sure I recorded the game, went out on my way to take my lad to training. Got in, got some tea, sat down to re-watch semi live, but made the mistake of flicking through Twitter. Seen the score at half time and fucked the first half off. Fucked it right off.

I mean, I’m fairly sure there is an expectation from TAW towers that I would watch the game if I’m assessing the performance of the players, but I’ve checked the small print in the old contract there and guess what? It’s silent on the point. Get in. If only I’d figured this out last year!

You might ask how I can reasonably assess the ratings given I’ve only seen 50 per cent of the action. Well, frankly I’m not sure. Maybe just from what got said on the texts and on Twitter.

Let’s see, aye? Something different, init. Every cunt will be doing it next week.

‘Bang into Kelleher playing like Chiellini’, which to the none observer is a bit confusing. I mean what’s been fucking going on there? Saved a pen, didn’t he? Which is always good times. Didn’t have much to do second half which is lovely.

Looked good, didn’t he? Huge fan of the big tackle he lashed in midway through the second half. Does well to win the ball back in the buildup to the third. Generally really neat and tidy.

He’s big, isn’t he? Really big and really very fucking good. Love his ability to attack the space and go with his man, even after only being here a few weeks. A future star.

See above except the big bit and the few weeks thing. Still, that absolute ability to play so high and track your man right into their half doesn’t half set the tone for everyone else. Great clearance/block after the pen save apparently. Well in.

Always important to remember his first love is sharks. It makes his performance even better given that he spends the whole game thinking about something that can eat your legs off. Great balls in all night. Absolute belter little ball for Div’s goal.

Having a comedy game, which frankly doesn’t sound good. Unless someone slapped a custard pie in his grid and a piano dropped on his head off a cliff, it’s probably a sign that he’s not played well there first half. Hang on, I got a text as well. “It’s mad how shite The Ox is”. Not my words them. Feels harsh. Was alright second half in fairness. Great energy, and great pressure and looked after the ball.

Really very good. Popped up all over the place, controlled the ball, knitted it together well. Easy to forget how good he is.

No clue. Gone with a sitting on the fence seven.

Two goals two great finishes, loved the second one as he knows he can’t hit it properly. Proper snide finish. Thought he was fantastic and would absolutely love him to be boss now. Looks nearly amazing, a lot of the time.

It’s crazy that he’s 16. Absolutely wild. The brain on him is the thing that’s the maddest. The ability to just hold the ball a second, or holding his position when everyone around him is moving. It’s an instinct, a gift. Loved the through ball second half for Div just after his goal when he was unlucky. A bit unlucky with the one he flashed over the bar second half.

I absolutely hope he signs for life. Honest to god. Everyone shitting their undies when we didn’t sign anyone and Divock just rewinds back to Jurgen’s first year Divock, setting up and scoring goals again. Great goal, really great header. Boss.

Come on and was really good. On the ball and off the ball he was everywhere you want that deep centre mid to be. Seemed to have all day on the ball. Not sure if that was down to Norwich running out of steam or not but he can only do what he can. Was great.

Keeps dropping in deeper than our line and playing everyone on side. Has done it a few games on the spin, to such an extent that I’m starting to wonder if it is purposeful. A new diddle that I cannot see the logic in.

“Loads of fans travelled far to Norwich tonight and the away end was so loud. That shows the excitement around this Liverpool side right now.”