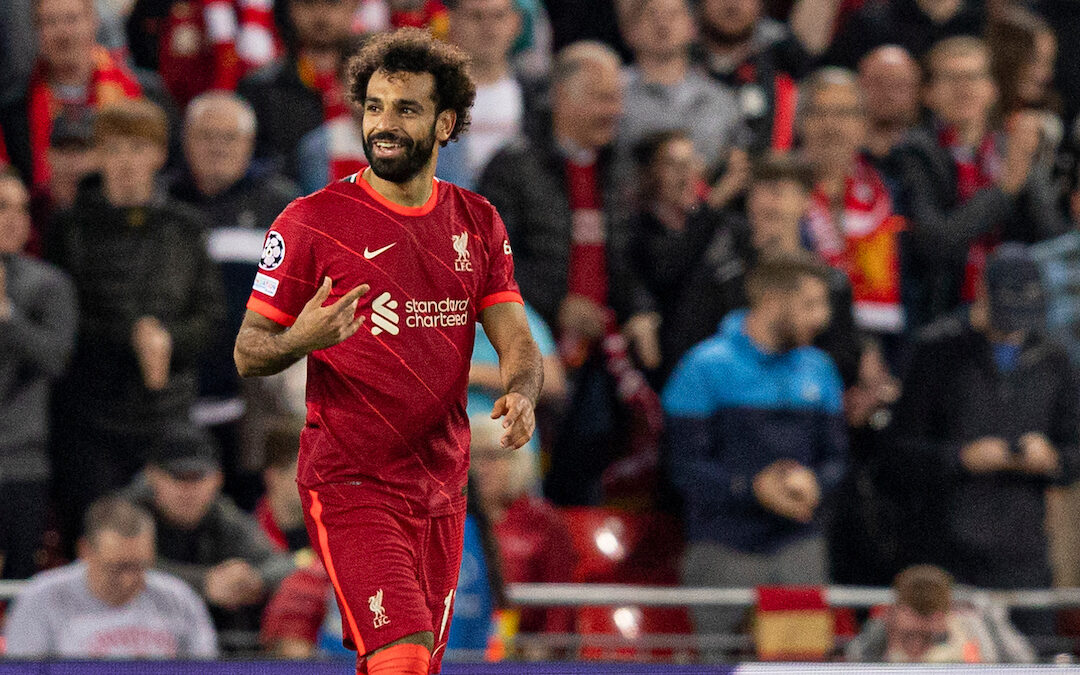 Ben Johnson’s player ratings after Liverpool 3 AC Milan 2 in the Champions League at Anfield, as Mo Salah once again stood out…

Absolutely fucking nothing to do first half and then, chop, chop, two goals go in where he really couldn’t have done much more and everyone is scratching their bollocks wondering what’s just gone on. Couple of good interceptions second half and all round sound fella. Extra point for being so sound.

Tremendous going forward first half. Aggressive powerful forward runs, topped off with a bit of luck for the goal. The little megs when he legged the lad and then Twatted it out. Everything that he was going forward all half he wasn’t in two minutes when both their goals started to develop. Wasn’t just him, was just a complete lack of pressure for five minutes that just unfortunately started on the right.

Certainly the first, not sure about the second. But, you know, if you want facts, go somewhere else.

Probably right to think they were shite and couldn’t hurt us. And then they stabbed us in the neck and finished us off with one through the heart. Died like a fella in a film whose been battering their wife for years. Surprise in our eyes. Agog. But it’s alright. lads. I wrote that bit at half time. Turns out we didn’t die and aren’t a baddy. Is so good in general that you get a bit blind to it, just becomes expected.

Was great first half. So much presence down that left, fed Divock first five minutes when he should have scored and carried on in that manner. Great pressing all game. When we did that they couldn’t live with us in the slightest.

Maybe might have scored a hat trick first half. Loved the dummy for Trent when he froze in mid air. He is just so good defensively. Unlucky with the second where he gets across to cover and it bobbles past him right to their lad. If i could pick someone not to get injured all season he would be in the top three.

It feels a bit unfair to only give him a seven because he was good and did nothing wrong. But because he plays on the Virgil side and VIrgil is constantly running up and down the touchline not playing like a big wonderful race horse, you can’t help comparing him. Missed that big Virgil switch tonight; Joe tried it once and hit the Gazprom fella in the top of the Kemlyn.

Spent loads of the first half wondering whether he was injured or just blowing a bit. Couldn’t really decide which. In hindsight, I think he might have just got the ball in the bollocks. Won all kinds of first and second balls and then twatted one right in. Right in, which was sound.

Really love how fuming he gets with everyone when he scores. Think he heard me and Melia (Melia really, Jordan) slagging his shooting and saying he can’t have any time to think when the balls coming to him or he lashes it at the Gazpromers. Then he twatted it in. Sound. Wasn’t in to him going off really, but it worked out well in the end.

Has such lovely feet, doesn’t he? That little one when he just took on loads of their lads in the first half in their box when he looked like he wasn’t trying. Neat and tidy all day and really looked at home in there.

The only time they got the wrong side of him they scored. Which tells you everything really. Really great again. So good with the game in front of him. His reading of it is unbelievable.

Was unplayable until the pen and then he missed which is a precursor for the weirdness that followed. Like, how has that happened? Seemed a little bit in his own head after that, which can fuck off. Happily he fucked that off second half and was then back to being pretty much unplayable. He works so hard it is unreal. Tremendous work ethic, filled in all over when we needed him. Might be the fittest man in the world.

Where the fuck has he come back from? He was in jeans on Sunday dressed to go straight on the ale and now he’s fucking giving it loads upfront. Was boss first 15 and then wasn’t quite as good. And then second half gave it absolute fucking beans for 15 and then remembered he had long covid and jibbed it. Never seen anyone wave to the bench that much to come off in me life.

That said, for the 15 he was like Bergkamp. That little through ball for Mo. Oh my god. Where have you been, Div? I honestly hope with all my heart that he bags 10 before Crimbo and he signs a new contract and then fucks off again until the European Cup final, and rinse and repeat until he is 42.

He is so wriggly. Bends all over the place, it doesn’t really make sense. Was OK. Worked really hard until he tired a bit. Would like him to start slotting again, really.

There was loads of these fuckers. More work. Fuck’s sake.

Reckon he is now kipping in the spare room, as looked like he could function a bit tonight.

Thought he was bright when he came on, can certainly do a job. Gone under the radar a bit this year because of Elliot, but got his chance now.

Come on and played bingo auld arse. Dived for a few freekicks in the corner. Knocked shite out of a few of them and nearly chopped some lads torso in two. All round brilliant bit of time wasting. Let’s get this one over the line, fellas. Cheers. Ta’ra.

Anyone else? Feels like I’ve missed someone. Ah well.

“Champions League nights are back! A full house, European royalty, that’s what we’re all about!”

Subscribe now to watch our On The Whistle video full of post-match reaction from Anfield 👇https://t.co/RZ5ckXvRKw pic.twitter.com/OhPdISnxMv