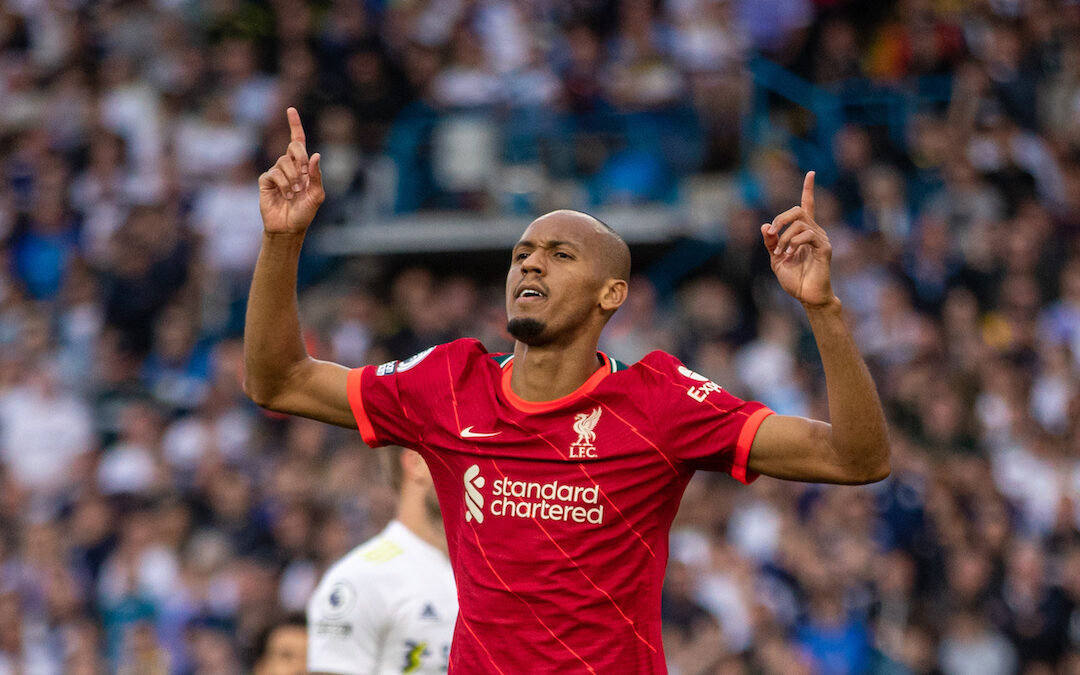 Ben Johnson’s player ratings after Leeds United 0 Liverpool 3 in the Premier League at Elland Road, with Fabinho the star of the show…

A VERY, very wise man said half way through that first half “this is like Rocky One, lad, when Apollo Creed’s coach says let’s finish this bum and go home”.

Does brilliant to stand up for the save in the first five minutes. Great movement for the Bamford halfway fella. Just the best.

What a ball for the first. Inch perfect. Such a big part of our attack but so good going the other way. Play him in midfield? Fuck off.

Cool as fuck. Honestly, might be the coolest fucker on the planet. “Cool Lester Smooth”. Everyone and their mate was screaming at him to play Mo in for the first, nah lads, I’ve completed this in my head, I’ve seen this before. I’ll just hold it, and hold it, and hold it, and slot in Trent, and see Mo, you moaning cunt, celebrate now x

Why didn’t he just fucking put that header when he has all day off the corner into the top bin. Let it hit his head. Was a bit weird, to be fair. That said, was fucking great for the second where he let it hit his head and then we scored. Maybe it was a plan and I’m a baldy gobshite who knows fucking nothing. The best thing about him being back is that it doesn’t feel like he has been away. Clean sheets getting boxed no bother.

Got a tendency this season to drop in deeper than the rest of the backline and I don’t like it. Has got away with it so far. Did well today. Unreal ability to just keep going.

Man of the match.

He is so good at being right there, isn’t he? Where? Just wherever. Whenever you need him. Like a fairy godmother in centre mid boxing you off when you have fucked up. Lad, don’t marry that frog or whatever. Was tremendous today. What a touch and finish for his goal. The complete player.

Great movement for the disallowed goal. Looks so much sharper than last season. Leeds whole game plan is to try and get you flustered like on ‘SAS: The Biggest Loser’ or whatever it is, with that little weird crab fella where they kidnap you in the night and take your mask off and start shining lights in your eyes. Thiago is like ‘lad, who are you, you little dickhead’.

Oh fucking hell. What a shame that is. His leg was pointing in the wrong direction there. I’m fucking sure of it. Started the season like fucking Xavi. Bastard. Fucking clapping their fans in the stretcher. Harder than iron, him. I broke my thumb once and couldn’t eat me tea for fucking weeks.

Still a bit wild at the minute but isn’t a million miles away from being unplayable, but then is actually very fucking playable. Unlucky with the one over the bar first half. Jota absolutely twatted it at him about two foot behind him. Maybe should have scored three.

Looks like he is in his own head. Like when Padraig Harrington won two majors and decided to reconstruct his swing and ended up snapping clubs and that cause his new swing was dogshite. Can’t kick it. Liverpool are set up to give him space and he couldn’t kick it for a bit. Hang on, last minute, he’s fucking scored. Hahaha get in. Swing his leg like Faldo with a driver. Bottom bin.

Lots of golf chat, here. Not sure why. Golf.

He is a superstar. My son, Buddy, asked me this morning who is the best player I have ever seen in the flesh for Liverpool. He was agog when I was trying to say anyone other than Mo Salah. Was looking at me like I was a whopper, which is fair. Great movement and finish for the first. Loved him fuming with Joel and then slotting and Joel just getting off. Would like him to get the space and balls Sadio gets, would score abar 60 a year.

He fucking gives the ball away a lot. Like he gives it away when he just needs a 10-yard pass and it leaves you wondering why he is playing and then blam, he drops one down out the sky and gets a shot off. That’s what you get in him. Absolute killer instinct.

Come on and very much looked like a man who had a newborn baby at home. Has three pints and is bladdered. Looked like he was high. Likely due to sleep deprivation.

Wasn’t in it as much as he could have been. But you know whatever.

Subscribe for all our post match reaction as the reds go to Elland Road and win 3-0 👇https://t.co/RZ5ckXvRKw pic.twitter.com/TfD9zPXB20