Manchester United 2 Liverpool 4: What We Learned 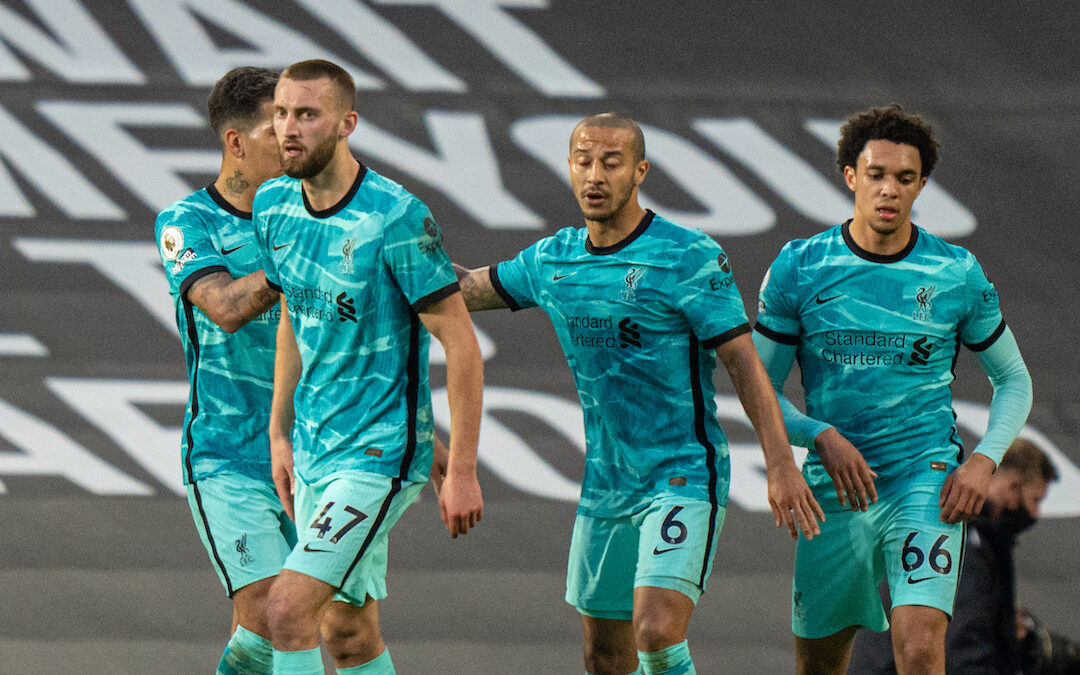 1. “Stick that right up your arse Ferguson”…

That was a lovely little text I got right on full time. It’s been a while since we have gone there and told them what time it is. Lifts the spirits, doesn’t it? For the first time in a long time watching that in the house, no crowd, felt like a proper match. Felt like we had some real skin in the game.

Maybe it was the scenes outside the ground. I’m all for the Mancs protesting against their abhorrent owners. Right behind them. I’m all for it. Dissent, protest, fucking let them have it. I don’t know about you, but I really do think the best way to strike a dagger to the heart of uber fucking capitalism is to gleefully sing about another city’s people eating out of bins and not having a job. Bragging about poverty, that’s will hit them where it hurts.

Honestly, them billionaire James Bond baddy owners will hear that and just fucking hand that club right over. Any minute now.

2. Fairly sure if we had been given a fiver for every time someone mentioned Manchester United missing Maguire we would have a lot of fivers…

Loads of them. Maybe 10. They wouldn’t fucking shut up about it. A huge miss. United were unsettled by his absence. Lindelof has had to play on the left-hand side instead of the right, missing his composure. Maguire this, Maguire that, Maguire the fucking other.

I mean, I know you would fucking miss his head if it was in your house because it would probably be as big as the fucking gable elevation, but fuck me. As a wise man said on Twitter (@distancecovered) imagine they had been without him since October, and Bailly and Lindelof were injured as well.

It really is incredible to think what Liverpool have had to put up with this season. These cunts were without one big fucking block-headed bobble-headed head for one game and it was the fucking end of the world. Bellends. Jesus fucking christ, they are interviewing their little fucking Gollum manager half an hour after the fucking game’s finished and they are still wanging on about Maguire.

Every centre half who ever played for Liverpool is getting fucking smoked here like fucking Saving Private Ryan or whatever. Fuck me.

3. Speaking of the centre halves, honestly, Nat Phillips is just a lovely big wool, isn’t he?

Did you see him getting interviewed? It nearly broke my heart. To be fair to him he was great there. Easy to lose your head scoring an oggy after 10 minutes or whatever but he cleared a couple off the line, went on a little mazy fella in their box, like he was skipping through the woods, bluebells all around him, patting fucking deers on the head, turned on a sixpence like fucking Rushie, gutted a dear and ate its heart and set up Diogo Jota.

And what about your man next to him? Last time he played at Old Trafford he got ragged. It was fucking shady. A bit of a kid, out of his depth. He didn’t put a foot wrong tonight there. Didn’t let himself get exposed, worked his way through the game. Has won at Old Trafford for The Reds. Friggin Virgil van Dijk hasn’t done that. Tremendous.

Best one for The Reds so far. All over the place, looking after the ball. Fantastic. Best midfielder on the pitch. Well, aside from Trent Alexander-Arnold, who wins that award without even playing there.

He was sensational tonight. Genuinely world class. And I mean that in its truest sense. Like top 20 players in the world. He is a generational talent. A one of a kind. This fiction around him not being able to defend is exactly that. Make believe. He is outstanding.

And yet that fucking donkey from Palace and Villa and Middlesbrough doesn’t think he is good enough to get in the England side. OK lad. Good one. Your top button on your waistcoat is undone there, fella. Best get buttoning that up or you might get found out.

5. And so somehow, some how, these Reds have won five and drawn two of their last seven and can salvage something out of certain fucking doom…

Honestly, with the injuries they have had, and the fucking smiting of every defender on their books, qualifying for the Champions League this season might be a bigger achievement than winning the fucking league last year.

Seriously. It is astounding that they have managed to pull themselves off the deck and be in with a chance. What a gang of lads. What a manager Jurgen Klopp is.

Up the fucking reds then, yer? Is right, the boys.

“This team have had everything thrown at them, but somehow with three games to go – the Reds are still alive”