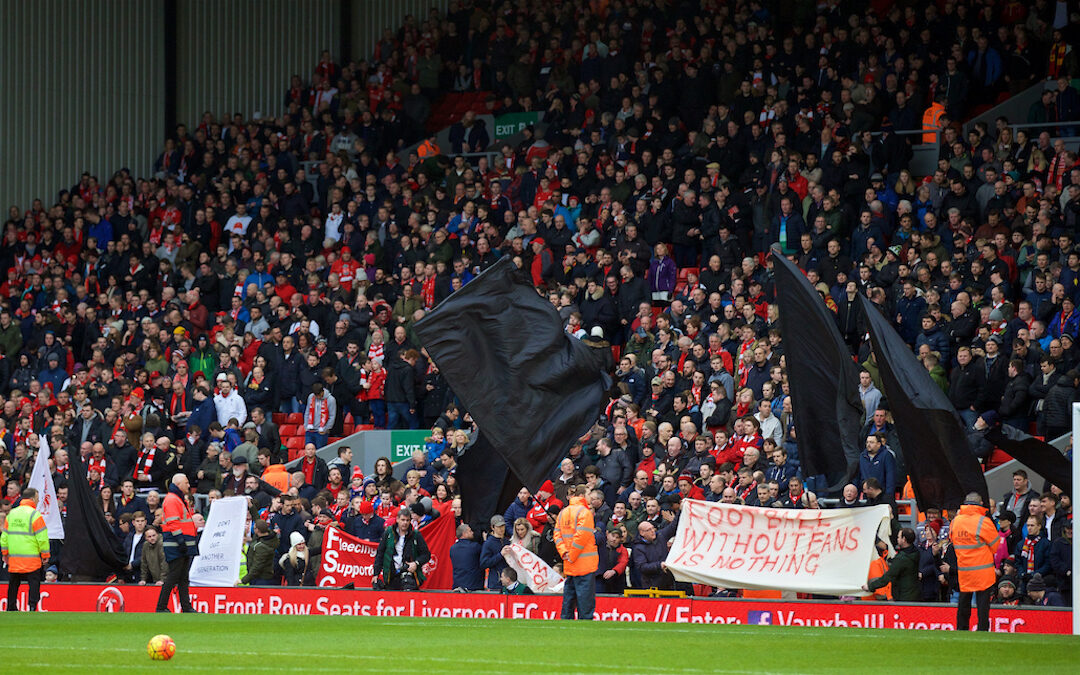 With European Super League owners moving to force through change, Josh Sexton writes that now is the time for ‘legacy fans’ to do the same.

WHEN something bad happens I always try to be introspective first and foremost.

What could I have done differently? Why did I react the way I did? What can I do to make sure this doesn’t happen again, or that I at least react better next time?

So here’s my early confession: I said I didn’t care. I wrote a piece about FSG the other week and said that, as they’d done some bad and some good as Liverpool owners, I didn’t really care for arguing about whether they are good or bad.

It didn’t come from a bad place, I’m somebody who’d rather focus on supporting the team for the most part and that was what I was trying to reflect, because supporting these lads has been a blast up until recently.

Now that the shit has truly hit the fan, that sentiment has caused me to reflect. Because of course I care. Maybe I’m complicit for saying that I didn’t. Maybe if my attitude was reflected by others that is the very reason this has been allowed to happen.

That kind of introspection is important to me. I hope that adopting that attitude will make me become a better human being.

SHAME ON YOU FSG pic.twitter.com/O7CFY2BrPF

Introspection is something that has been severely lacking across all corners of the footballing world over the past 24 hours, or even longer depending on where you choose to start this particular thread – and make no mistake it could go as far back as 1992.

When I first saw the news reported yesterday that the European Super League was very much on the cards, the first people I saw react were fans. A mixture of anger and disappointment, at least within my echo chamber of Liverpool support.

So let’s start with us. I’ve already acknowledged how my actions may have contributed to this, but have we done enough as a whole to stop this kind of thing happening? I’d love to say yes, and I acknowledge that this isn’t easy when you’re talking about literally millions if not billions of people, but Neil Atkinson said it best in his newsletter today.

Because we’ve eaten all of this up, haven’t we? Transfers, deadline days, top four battles. In a way they’re all contributing factors to the monster that this sport has become. It’s all about the money and, to a degree, we’ve always wanted Liverpool to be in a position to make the most money, sign the best players and win the most trophies.

Of course there is a flip side to that, we’d all like the club to do right by its community, to do right by us as supporters, and so on and so forth. But if we allow the smooth and only really kick up a fuss at the rough, are we too complicit? It’s worth thinking about.

Next on the list of entities to react as the news broke were the broadcasters and their employees – namely Sky and Gary Neville.

😡 | “I’m a #MUFC fan and I’m absolutely disgusted.”
💥 | “They are an absolute joke.”@GNev2 gives a brutally honest reaction to reports that England’s biggest clubs are expected to be part of plans for a breakaway European Super League. pic.twitter.com/VfJccHgybc

Sky and their employees would go on to suggest that this was all bad for football and that once again fans had been let down. That ‘once again’ there is crucial. Because fans have been let down for years and it’s not just by the owners of our clubs.

Think of the daft kick-off times in the furthest reaches of this country, the constant last-minute rescheduling of games to suit anybody but the thousands who have to make plans around work and travel to create the colour that is used to market these matches.

Think of the very inception of the Premier League, a breakaway from the old divisions and an establishment of an elite at the very top of the English game, and the role Sky played in that. They could not be more complicit and their search for moral high ground is sickening.

That of course trickles down to their employees, no less Gary Neville. What about his interest in this? He’s part owner of a Salford City side who have all but financially doped their way up the English football leagues. He’ll be hoping they reach the Premier League one day and thus this affects him directly in that sense too.

Next on the timeline came the reactions of FIFA, UEFA and the Premier League. Honestly, where do you even start? The Champions League, which was another breakaway from the old European Cup. The Premier League, which we’ve already established all but did the very same thing. Shite when the shoe is on the other foot and you stand to lose out, isn’t it?

Since then I’ve seen players, managers and many more who work directly in the game react with the same disdain, using the lack of consultation as fans as their crutch. These are the same managers and players, plus their agents, who have also played their part in tarnishing this game for their benefit, or have at the very least stood idly by as it has happened.

The next people I hope we hear from are those greedy pricks who are now the straw that broke the camel’s back. After the year us supporters have had, not being able to watch our teams and having the very product we’ve invested our lives into made into some mundane science before our very eyes, they go and serve us up with this.

Make no mistake, it is an absolute disgrace.

But now is not the time to get tribal about it because we could be here all day without directing our anger in a way that forces change. Let’s instead make now the time for a positive change for us. After all, that’s what these greedy pricks wanted for themselves.

Whenever I’ve discussed FSG I’ve always thought ‘be careful what you wish for’. Because, as the last 24 hours have shown, so many other owners are capable of this and worse – and all under the names of our clubs.

But now can be the time where we make it unequivocally clear who this sport and our clubs belong to.