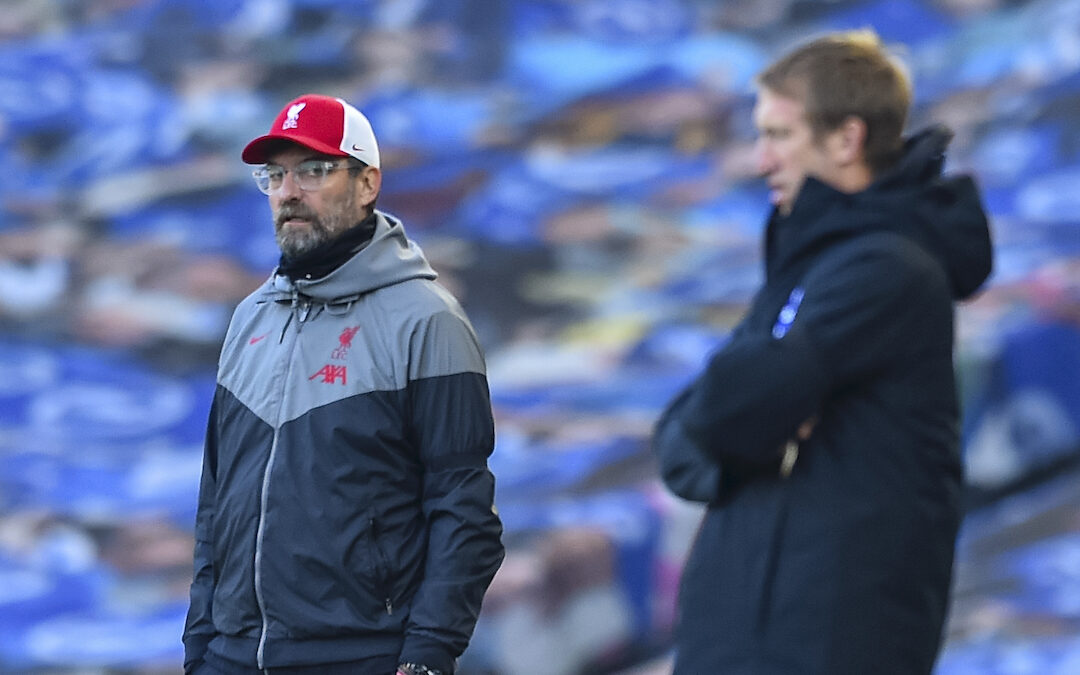 Rob Gutmann’s match preview ahead of Liverpool v Brighton & Hove Albion, with The Reds buoyed by back-to-back wins and some fresh faces through the doors…

AFTER watching The Reds triumphing in some style over two ball-breaker sides in Tottenham and West Ham, I was quietly looking forward to the more routine challenge that near bottom of the table Brighton at Anfield would present.

No matter that they’d enjoyed a confidence-boosting win over Spurs, or the perception I had every time I’d watched them that they were half decent, the table – god bless it – didn’t lie to this extent. Seventeenth is 17th.

Then you drill down. Brighton have only conceded eight times in their past nine games. They are solid. Burnley were solid too, and that foundation helped them beat us at home just a fortnight ago. In those nine games Brighton have lost just two. They’ve won twice and drawn five times. One of the defeats was away at City and the other one at Arsenal. Both single-goal reverses.

Graham Potter’s outfit may very well be in that rare thing, a false position. They are far from the shite that their league placing suggests and will fancy it at Anfield.

Unlike Burnley and West Brom who have so thwarted Liverpool in the past month, Brighton are not inveterate bus parkers. They have a go, but in a measured enough way that they don’t ship goals in quantities. Anfield will not daunt them, but then why should it – there will be no spectators there.

That Liverpool’s home record this campaign is as impressive as it is bears testimony to the mental strength of Klopp’s group. It is a mentality that was called into question time and again over the course of a long month that stretched from late December to late January. 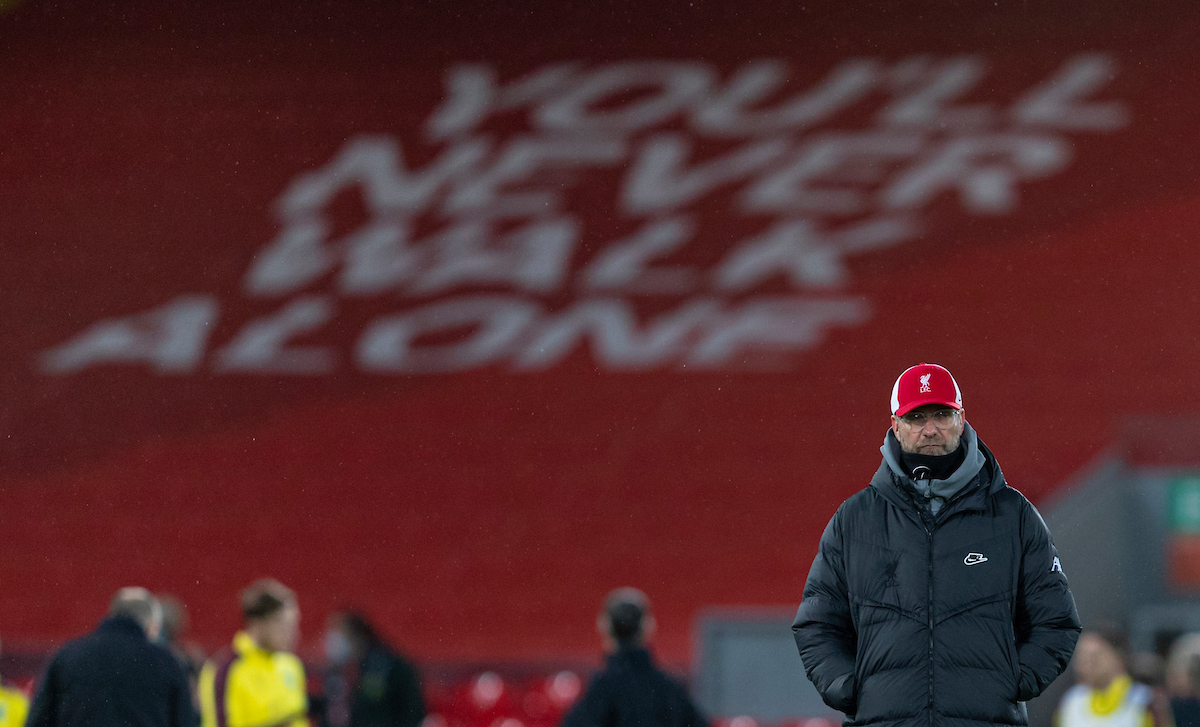 Eventually there had to be a Champions’ response. Liverpool are no one-season wonders. Nobody has taken more points in the Premier League in each of the past three calendar years. That phase has garnered two European Cup finals, including the one Champions League win and the league title itself. A team this consistent over such a period of time doesn’t just fall off cliffs.

The majestic away wins at Tottenham and West Ham do not prove categorically that Liverpool have arrested their December/January slide, but it’s a powerful foundation from which to rebuild.

It’s impossible not to look over Brighton’s shoulders to the looming challenge that league leaders and heir apparents to Liverpool’s crown, Manchester City, represent. Jürgen Klopp’s selections for Wednesday night will be influenced by this prospect, but he will equally know that to make the City game truly meaningful his boys have to see off Brighton first.

In his pre-match press conference Klopp gave everything and nothing away. “Any change in the injury situation, Jürgen,” they asked. “No change,” was all the boss would offer up in reply. What that actually translates to in practical terms is anyone’s guess.

The last updates were that Sadio Mane and Fabinho had ‘knocks’, injuries dismissed as ‘nothing’. Naby Keita has been ‘close’ for a number of weeks. I’m working on the assumption that none of these guys will make it for Brighton and we must pray that Fabinho and Mane are good for City.

The squad options have seen adjustments at the end of the transfer window. Takumi Minamino is no longer on our roster but we do have two new young centre backs. Ozan Kabak won’t be available yet but there’s a possibility that Ben Davies makes the matchday squad. 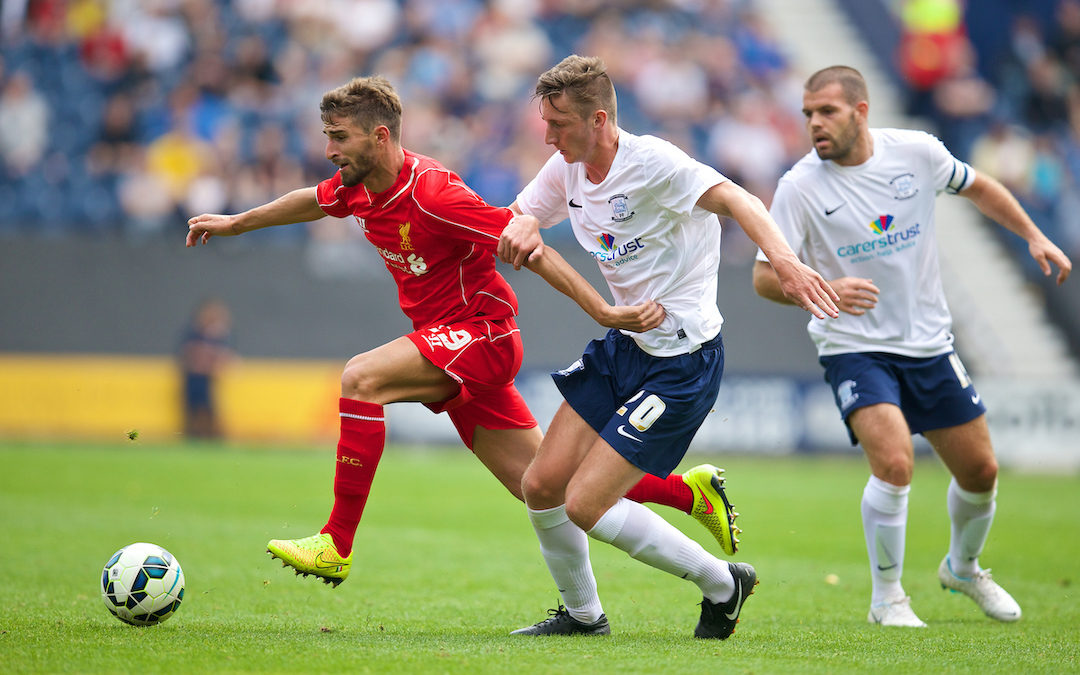 Given that Divock Origi will be a doubt after coming off against West Ham, I’m expecting Klopp to look to reprise something akin to the 4-4-2 diamond set up that won in London at the weekend. The rested Bobby Firmino should partner Mo Salah upfront, with Shaqiri just behind them at the tip of the diamond.

In midfield we really should be looking to rest Thiago and/or Wijnaldum, but there’s little prospect of that given paucity of fit and available men. At least 35-year-old James Milner should get some respite and Curtis Jones earn a well-deserved start on the left side of the midfield shape. The defence could be same again with Nat Phillips worthy of partnering Jordan Henderson once more.

There is little prospect of complacency from Liverpool in the face of Brighton’s understated threat. Our record against the bottom six or so this season has been surprisingly woeful.

We are forewarned, heavily forearmed, relative to the visitors, despite injuries, the rest is now about how much we really want to stay in the conversation for this season’s league title.

“City are different from last season and it makes the game at the weekend against Liverpool all the more intriguing.”

✅ Brighton build up
✅ Man City this season
✅ Commentating in 2021