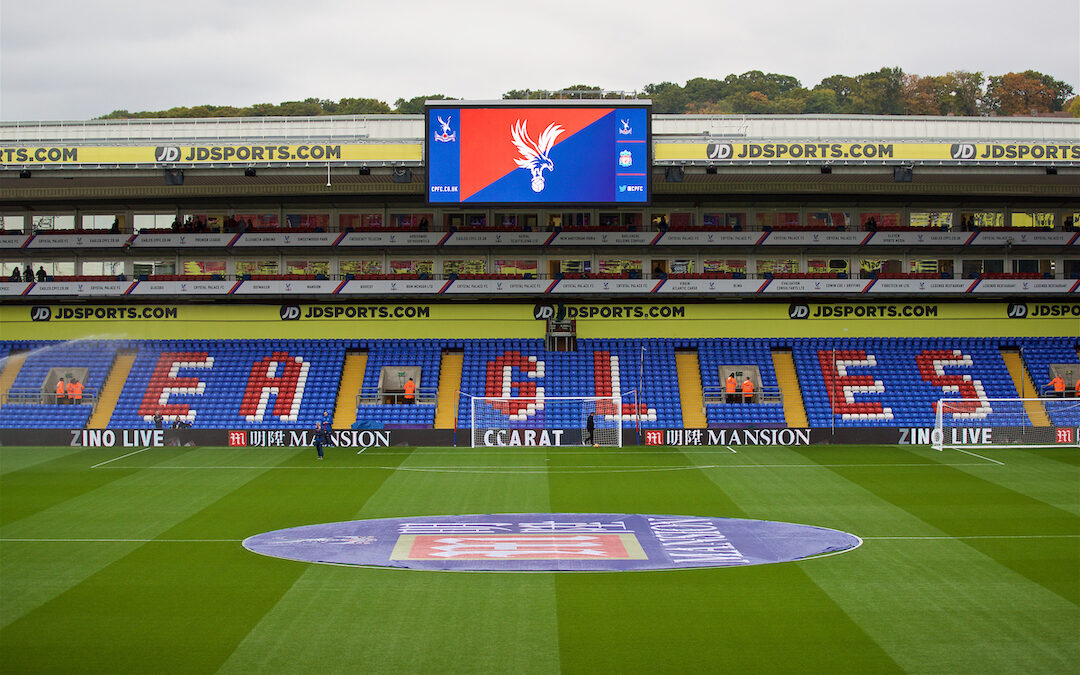 Rob Gutmann’s match preview ahead of Liverpool v Crystal Palace at Selhurst Park, with The Reds *very* fresh off their biggest win of the season so far…

WE can breathe again.

Three points clear at the top of the league after 13 games isn’t the biggest lead, but it’s our first of the season.

Liverpool have endured everything that fate has to throw to dethrone a champion – record injury rosters, best players falling to the virus, head of the VAR stitch-up rankings – and stood firm. More than firm, top of the pile and rock solid.

In hindsight, I’m putting the abject performance at Fulham a week ago down to post-European away travel blues. It’s a timeless truism that teams look jaded after significant travelling. Bob Paisley used to moan about it in my youth. He believed you could only hope to grind out a result after a week of planes, trains and automobiles on the continent.

The relentless, breath-taking quality on show from The Reds in midweek was the real face of this team. What was extraordinary was that there appeared to be no let up in energy levels for the full 90 minutes, and that without a single substitution being made.

A trip to Selhurst Park where the home side are always lively opponents was never going to look ideal, with less than three days respite and a midday kick off. 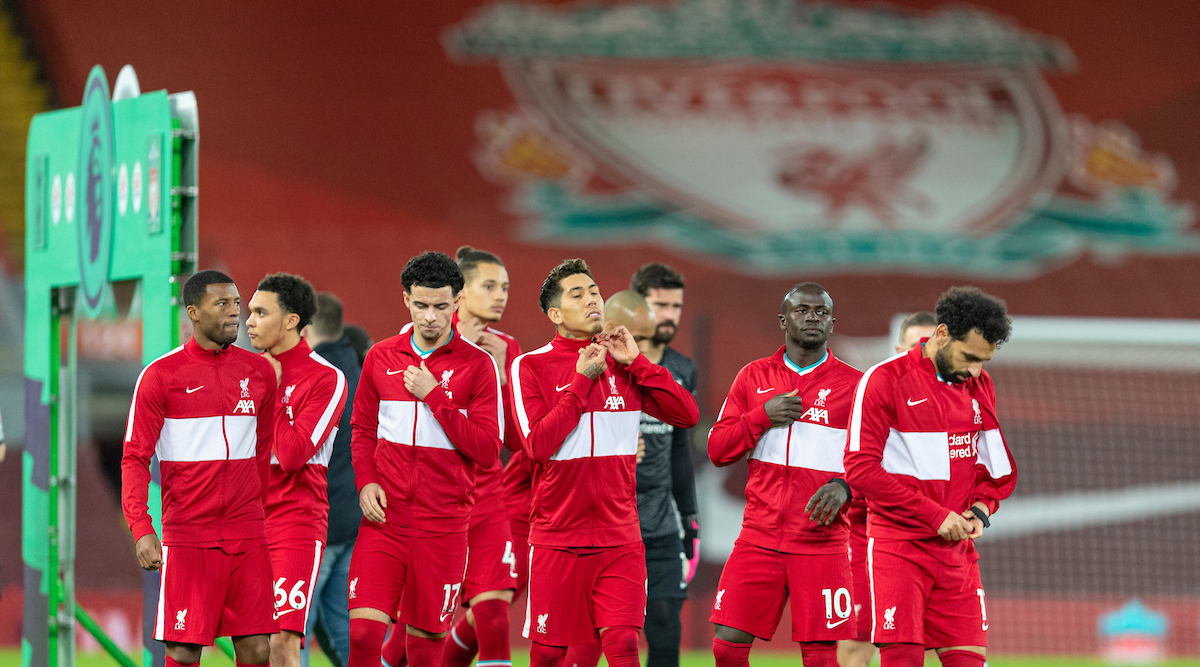 We can presume Jürgen Klopp gave his knackered heroes the entirety of Thursday off to spend horizontal at home. Friday will have been spent mainly travelling and settling in to pre-match accommodation in London. It’s a fair bet that I’ll have done more training than Klopp’s first 11 during the later part of this week.

There will not have been sufficient time for full-scale practice games with the Under-23s doing impressions of Palace. There will scarcely have been opportunity for Klopp and his coaches to show the lads some videos and to get the tactics whiteboard out.

“They’ll go long, play off the second balls, and look to win set pieces… OK goodnight, thanks and best of luck tomorrow,” might be the sum total of the manager’s pre-match pep talk.

Crystal Palace will also be playing their third game in six days. They are having another routinely weird season. They a weird team with a weird manager.

At home to Spurs a week ago they looked a real handful. There was invention, pace and threat in forward positions. Zaha and Benteke looked a veritable handful up top. Thankfully for Liverpool, their former charge, the in-form Benteke, won’t be available to manager Roy Hodgson after his midweek sending off.

Palace, with just one win in their past five games, always seem to raise their game for Liverpool. Having said that, The Reds always find an answer to the questions Palace pose. Five straight wins at Selhurst Park are evidence of that.

Ordinarily, in a run of fixtures this compacted, you’d expect Klopp to look at a fair few changes for a game like this. The manager resisted the temptation to do that not just for the start of the Tottenham game, but for its duration. He may well think that the adrenaline gained by beating Spurs and surging clear at the top of the league could suffice enough to see the same side put out again. 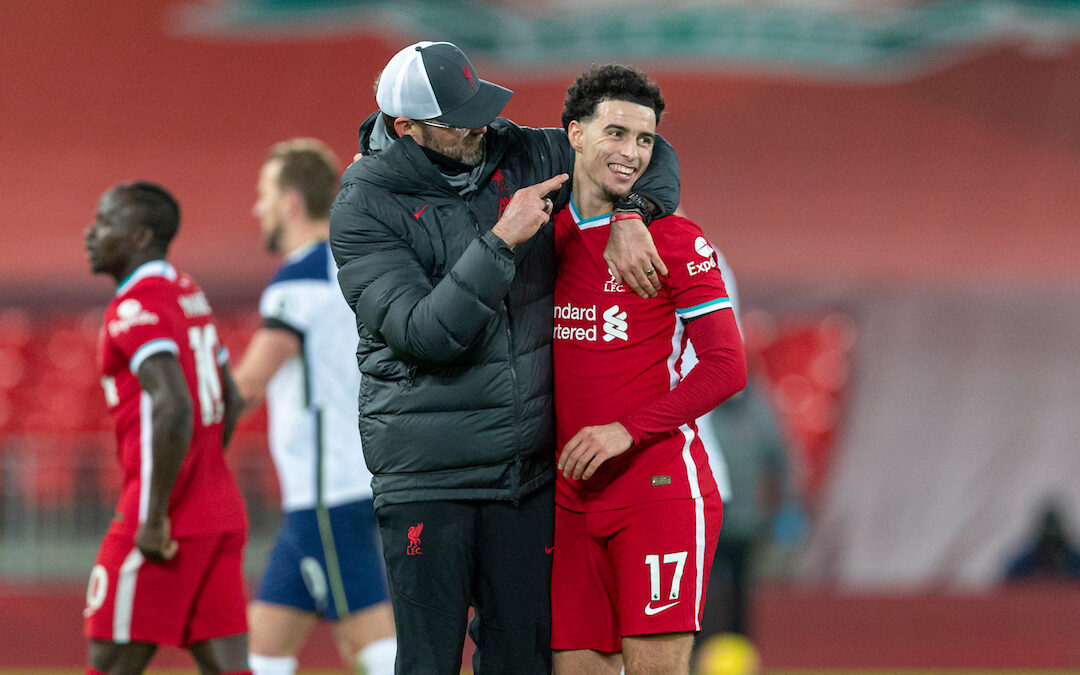 Joel Matip is fit and should replace young Rhys Williams, but you never know. Rhys has done enough to keep his place.

Klopp has options in midfield for once and he could be tempted to start either of Alex Oxlade-Chamberlain or Naby Keita to facilitate a rest for any of his overused three central midfield players.

With all of the first 11 so clearly in form, and with respite looming before the West Brom game after Christmas, the biggest temptation will be to simply go again.

Liverpool looked very much like they had the bit between their teeth again on Wednesday night. It was the performance of a champion saying ‘enough is enough, this is our title and we’re coming for it’.

Palace can thwart Liverpool on Saturday, but they are going to have to put in the best performance of their season to do it. And even that shouldn’t be sufficient.

“You don’t have to look further than Jurgen Klopp for a lesson in humility.”@jsexton24, @Adam_Smith_82, @emiliabona & @HarrietEPrior react to the press conference and #TheBest awards.