My Madrid Memories: From Doubters To Believers 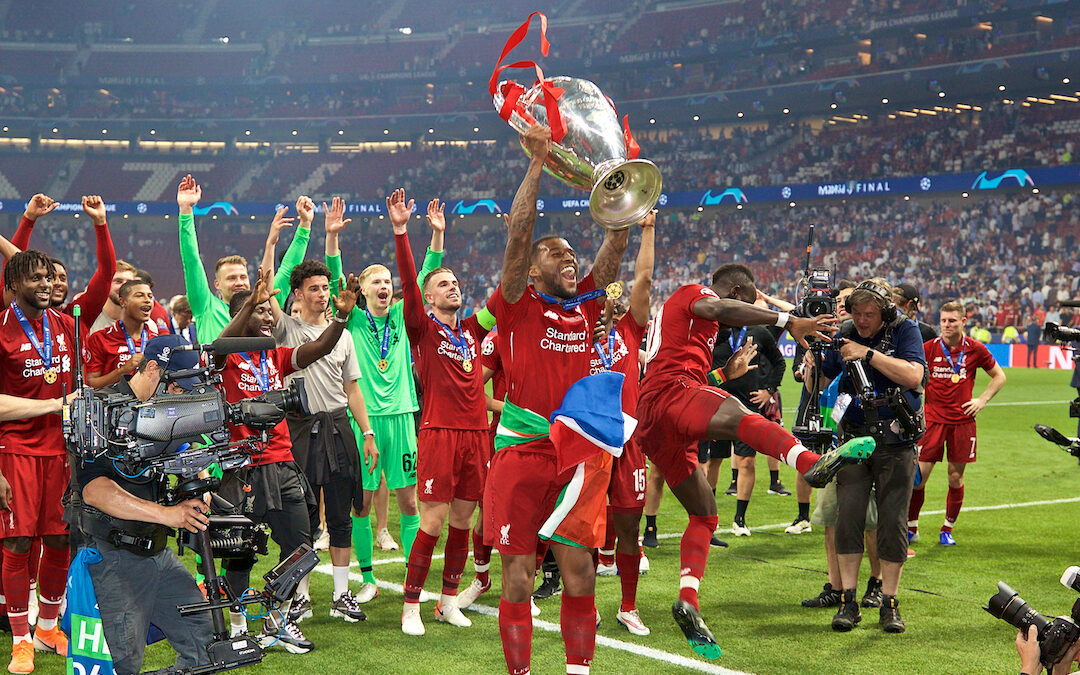 IN the anniversary week of Liverpool’s 2019 Champions League final victory, we at The Anfield Wrap are looking at our own experiences from that night.

Last year, I detailed the evening I enjoyed in sunny Sussex by the sea with The Brighton Kop. So rather than largely repeat myself, I thought that for this week’s column, I would instead share with you an extract from one of the shiny new chapters in my recently updated book, Kloppite: One Man’s Quest to turn Doubters into Believers, particularly the part about that wonderful night in Madrid.

They were the champions of Europe.

The players and staff on the substitutes’ bench raced onto the pitch as Klopp shook Pochettino’s hand, knowing full well what he was going through having experienced it himself more than enough times. He then made his way onto the pitch and hugged anyone he could get his hands on, while also taking the time to console some of the Spurs players.

BT Sport managed to grab a word with Klopp as his players took in the celebrations, with the manager colourfully suggesting that: “Usually, 20 minutes after the game I am half pissed, but I think I will get a water.”

After the iconic trophy was raised by skipper Henderson, and the players had spent what seemed like an eternity enjoying the celebrations with each other and the fans, Klopp took his place in the post-match press conference, and tried to put into words just what it meant to bring the European Cup back to Anfield for a sixth time in the club’s history, and to win it himself for the first time in his career.

“I feel mostly relief, to be honest, relief for my family, actually, because they are pretty close to me and the last six times we always flew on holiday with a silver medal, that doesn’t feel too cool. This is completely different this year. It’s for them as well, that’s great.

“It’s for the supporters of course, but for our owners as well because they never put real pressure on us, they appreciate the development, they see the steps we make. It’s for them as well. For the players, we were all pretty much crying on the pitch because it was so emotional, it was so big, it means so much to us.”

He was also asked about what his team’s success meant to him personally.

“We spoke two days ago about my ‘unlucky’ career somehow. When I hear it I think, ‘Yeah, people could see it like this’, but I don’t feel it to be honest, because I always see the way to a final because that’s of course important for me as well.

“I think my life is much better than I ever expected it, so winning something is good, it’s cool, but it’s for all the other people. I’m not so much in it, I’m much more really in development but I get it, we have to win things, so for us it’s really important that people don’t ask now all the time about not winning or winning things.

“Now we won something and we will carry on. We want to win things, 100 per cent. I’ve said it, this is only the start for this group. It’s still a wonderful age group, they all have the best times in their careers ahead of them so that’s big. For me, I’m really happy. I have a lot of silver medals and now I have a golden one so it’ll be next to the silver medals in my house and that’s cool.

“But mostly, I’m happy for all the other people.

“Tonight is really emotional, that’s my main feeling, it’s overwhelming, all that stuff. It feels really good but I’m much calmer than I thought I would be when it finally happened. It was not important to me to touch the cup or whatever. I loved the pictures when the boys had it, I loved it when I saw a few faces in the stands. That gave me everything I need. Tomorrow, going to Liverpool and having something to celebrate, that’s big and I’m really looking forward to that.”

Approximately 750,000 people lined the streets of Liverpool to welcome the team back, beginning at Allerton Maze and ending, several hours later, by the waterfront.

Klopp, his players, his staff and family members spent the entire time waving, holding the trophy aloft, and sinking more bottles of beer than they had all season. The manager mostly sat at the back of the bus, perched with a bottle in one hand, and waving with the other. He was in his element, able to finally sit back and enjoy the adulation from the people, knowing that the European Cup was safely in the bag.

At one point as the bus stopped suddenly, he wobbled slightly, but had he fallen off, the mass of humanity lining the streets would likely have caught him and carried him the rest of the way on their shoulders.

He told the club website afterwards just what the day had meant to him. “I cannot really describe it. I cried a little bit as well because it’s so overwhelming what the people are doing.

“When you have direct eye contact and you see how much it means to them, that’s touching to be honest. It’s brilliant.”

In his first press conference of the season before the opener with West Ham back in August, he had said that Liverpool were still “Rocky Balboa and not Ivan Drago”.

The day after collecting his FIFA Men’s Coach of the Year award in Milan (Sept 2019), The Players’ Tribune released an article written by Klopp, where he told a story of his time in Dortmund in which he had also referenced Rocky IV.

His team were about to play Bayern Munich, and he gave a speech to rouse his players and give them the hunger to beat their own Ivan Drago. It turned out that most of his players hadn’t seen the film, so had no idea what he was talking about.

“You see, this is the real story. This is what actually happens in life. We are human beings. Sometimes, we embarrass ourselves. That’s how it is. We think we’re giving the greatest speech in the history of football, and we’re actually talking complete nonsense. But we get up the next morning and we go again.

“I have seen what a little round ball can do for the lives of so many of my players. The personal journeys of players like Mo Salah, Sadio Mane, Roberto Firmino, and so many of my boys are absolutely incredible. The difficulties I faced as a young man in Germany were nothing compared to what they had to overcome. There were so many moments when they could’ve easily given up, but they refused to quit.

“They’re not gods. They just simply never gave up on their dream.

“I think 98 per cent of football is about dealing with failure and still being able to smile and find joy in the game the next day.”

He also announced that he had joined the Common Goal project, meaning that he would be donating some of his salary to charitable causes.

“Just think what we could accomplish if we all came together and gave one per cent of what we earn to make a positive difference in the world. Maybe I am naive. Maybe I am a crazy old dreamer. But who is this game for? We all know damn well that this game is for dreamers.”

Klopp is a dreamer. He had been a dreamer in June 2018 just hours after being beaten by Real Madrid in the Champions League final.

“We swear we’ll keep on being cool, we’ll bring it back to Liverpool.”

He made good on his promise…

If you would like to read the rest of Kloppite, it is available through most good online book shops.

If nothing else, it has a lovely red spine that will look brilliant on your ‘look at how cultured and brainy I am’ book case while you’re having Zoom meetings.

"You could sense that this time yes, the hurt of the defeat against Real Madrid was left behind."

"It was the time to enjoy what was coming…"@GuillemBalague on Liverpool fans in Madrid 🇪🇸 pic.twitter.com/7y4uvrDSi1