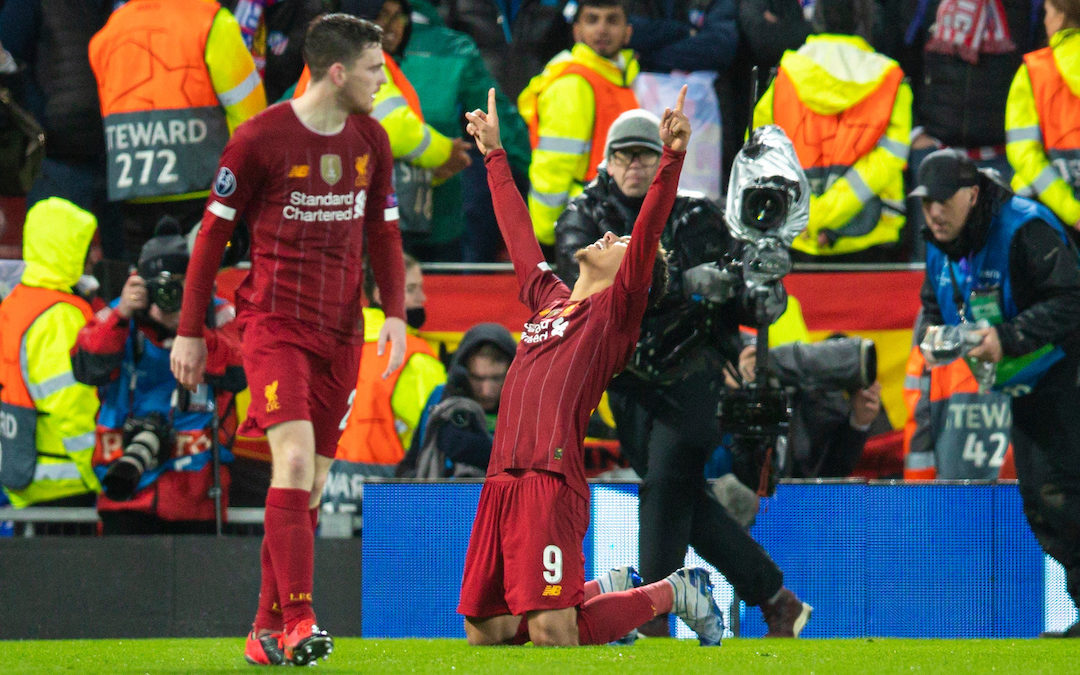 AND there you have it.

A fucking league-stopping pandemic coupled with an Atletico diddle.

Lash into the mix that loads of people we know are probably going to die, but even if they don’t we will all be fucking skint and living off fucking grass and whatever we can catch on the beach.

Up the fucking Reds, aye? I told you to wash your fucking hands.

It’s fine lines in this game at this level. We won this competition last season because we were ruthless in both boxes when we needed to be. Took our chances and had a keeper who was tremendous every week. That’s the dance.

The difference tonight was there fella was boss and ours was a sub goalie. Feel bad for him, but if the first mistake doesn’t get made then the game is won. One of them, init? Went down like a fucking tasered cow for the second. What a fucking shame.

The foul for the offside last minute fella. Jesus fucking Christ. If Houllier had been in charge and it had stood it would have been Exocet missile through the heart territory. That said, he wasn’t, it didn’t, and so Adrian ordered a fucking big exo fella for himself. Played really well as did all the outfielders.

Look, it’s hard to try and look back over that and be rationale, or objective, or anything really, so fuck knows. Played well. Dealt with that fucking big fucking Honey Monster really well. Like all of them, didn’t deserve to go out, never mind lose the game on the night. Shite.

Would like him to never go upfront ever again because he never wins a fucking carrot. Yer, yer, lash it on the fucking giant’s head in the middle, oh look at that he has just lost a header to fucking Alan Wright.

Boss as per at the back. Tremendous. Would have liked him to have picked up Oblak at the end and tombstoned him onto some fucking concrete when he was pretending to be injured. Horrible them, aren’t they?

Getting tiring this ‘didn’t deserve to be on the losing side’ shit, isn’t it? But we are where we are. Didn’t stop all game. Honestly, the extent to which Liverpool were pretty much perfect without scoring enough goals is such a fucking shame.

Should have scored the one against the bar and should have hit the target with a couple of others.

Great header, honestly. Does unbelievably to set up the second, when he was boxed in and then roasts their lad and breaks. Was brilliant.

Love him. Great to have him back. Everywhere all over the pitch. Keeping it ticking over, getting The Reds started again. Loved him screaming at the little rat upfront. Rat.

Was really good creating space with Mo, and getting in down the right. Great at setting the tempo, missed him when he went off, even if he had tired a bit by that point. Great ball in for the goal.

Looked like he was playing in his school shoes there first half, proper fresh out the shop, not work in or scuffed up, leather soles, could fucking ski on them. Better second half, made up he scored.

Fitted between really dangerous and not being able to pass it five yards. Should he have done better with the overhead kick? I’m saying yes, but then that’s easy for me to say. If you made me do one now I would probably break my back.

Was brilliant tonight. Could have had a bag full on another night. Caused them all kinds of problems, kept creating space, beating his man. Best he has played in ages.

When he come on I turned to Adam Melia and said ‘get on how shit he is going to be here, lad’. And he said ‘but he will probably score’. He didn’t score.

Won some good last-ditch pass tackles. Fighting a losing battle once they had something to hang on to.

Did well when he got on the ball. I like him. He is sound.