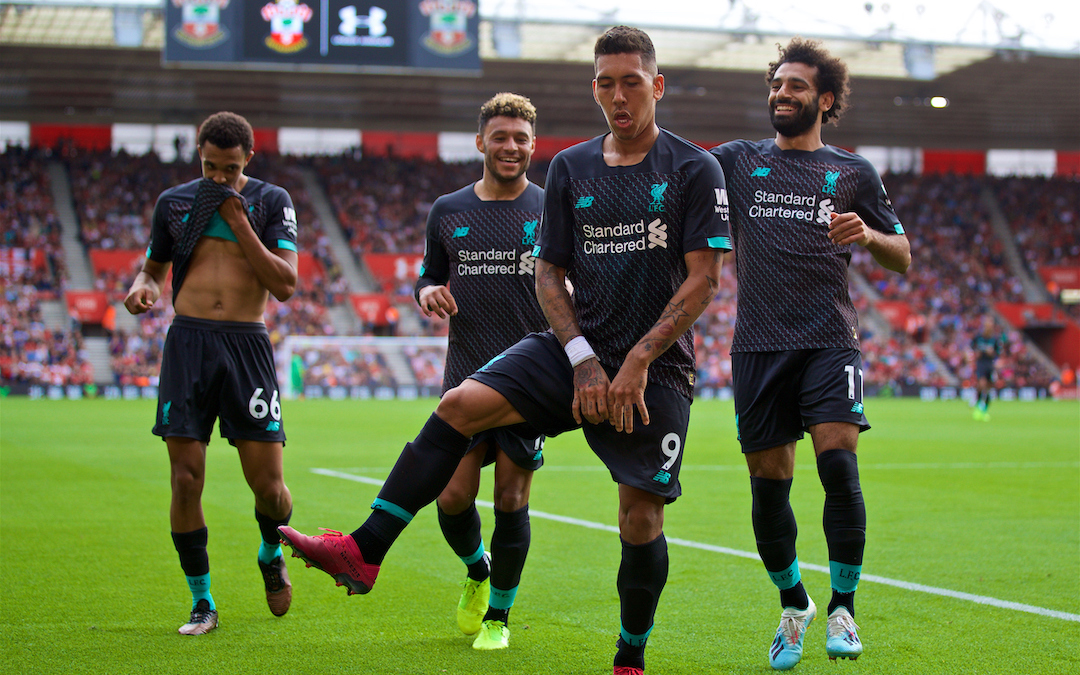 I’M managing to talk myself into believing that each and every one of Liverpool’s next opponents are the coming force in British football.

That our next game will be the toughest game of our season thus far.

Maybe I’m just motivating myself the way Klopp will be motivating the Liverpool players from match to match. We’re all so ‘one game at a time’, it’s ridiculous.

Our win at West Ham on Wednesday night established a 19-point lead over second-placed Manchester City. In a season of breaking records, I’m going to say that Liverpool Football Club currently have the greatest lead at the top of the table that we’ve ever enjoyed in our history.

Heck, I might not be correct but it sounds about right. Liverpool are so good just right now that it’s hard to process really. We are living a dream that none of us want to wake up from.

I was discussing our revised targets for the season with long-time Anfield Wrap contributor and mate, Mike Girling, on the train back from London the other day. Mike was all in for the European Cup. Like many, he believes that the league is done and that we can effectively start to begin to think about resting players ahead of the big push for Europe.

I didn’t entirely disagree, but I wondered whether we also had another parallel target beyond just securing the league title. 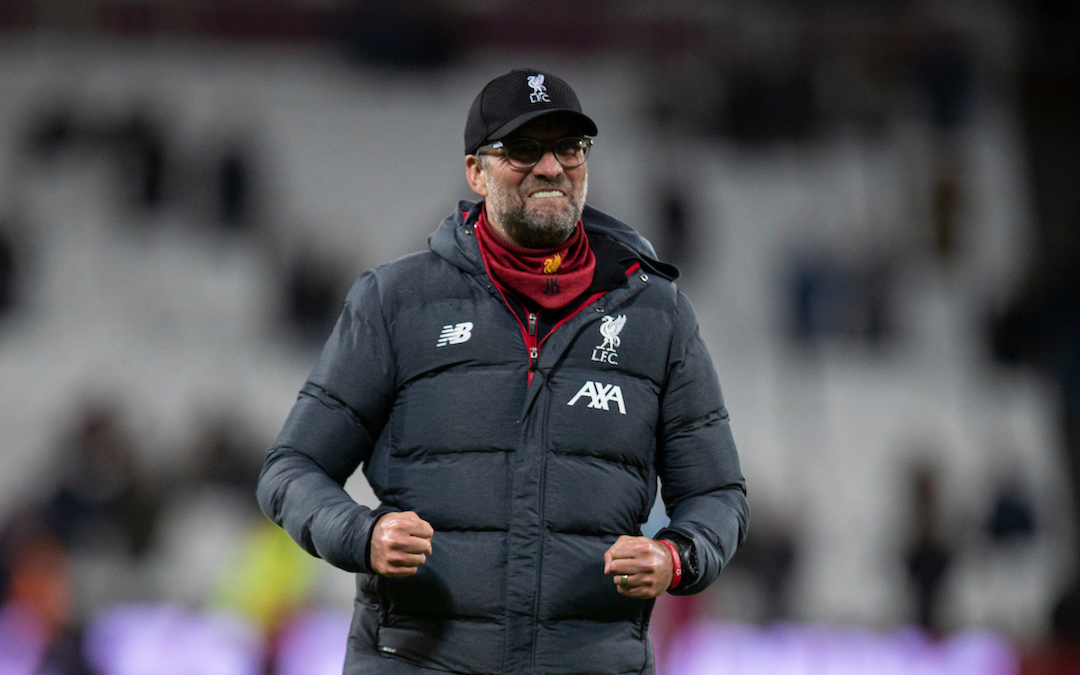 The world now believes that Liverpool will win the championship and is perhaps turning attention more to the question of ‘by how many points’. It is not just the title that is at stake, it is a place in football history.

If we secure anything north of 100 points, we will go down as one of the very greatest teams to have ever played the game in this country. There are title winners and then there are a handful who have achieved something beyond just securing the title crown itself.

The immortals of the game are the likes of Arsenal’s ‘Invincibles’ side, Pep Guardiola’s ‘centurions’ and Alex Ferguson’s treble winners. Liverpool have an opportunity now to secure a points haul that eclipses anything attained by these greats.

My argument to Mike was that, perhaps achieving this milestone is ‘as good as another trophy’. I’m not saying I wouldn’t rather Liverpool ‘merely’ win the European Cup and league title, but I don’t think it’s to be underestimated what is at stake in terms of the points target.

There are few dilemmas, here. This is a campaign in which we are having our cake and gorging on it. The squad appears to have the requisite depth to deal with each and every challenge that comes its way.

Southampton, I am convinced, are a challenge. They’ve won five out of their last seven. Scalps taken include Chelsea and Spurs. We’ve been telling ourselves that recent wins over United, Spurs and Wolves were tough hurdles jumped, but I think Southampton could provide the sternest of our tests since Christmas.

Manager Ralf Hasenhuttl will give late fitness tests to Shane Long and Yan Valery, but has already ruled out Jan Bednarek and Stuart Armstrong. Jannik Vestergaard is fit to return after a concussion. Free-scoring Danny Ings will definitely start and be the proverbial man with something to prove as he returns to Anfield determined to show the Champions elect what they could’ve had. 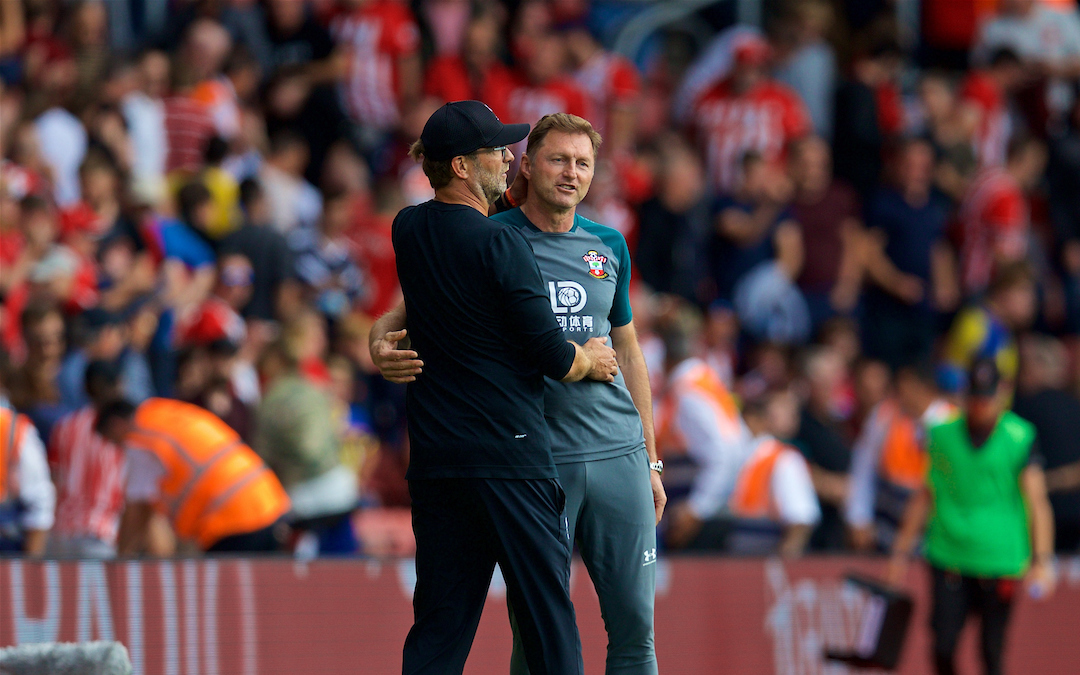 Jürgen Klopp has traditionally been concerned about asking too many to repeat games within 72 hours and will be mindful of needlessly overexerting those in fitness ‘red zones’.

I’d expect the Liverpool boss to see this fixture as an opportunity to get Fabinho back into his starting berth at the base of the midfield. He could see a chance to rest the near ever-present Gini Wijnaldum and leave Jordan Henderson in the side to aid Fabinho’s rehabilitation as another ‘six’ in a 4-2-2-2 setup.

If Klopp opts for four offensive players he’ll then most likely look to perm two from a three comprised of Naby Keita, Alex Chamberlain and Takumi Minamino. I think he might look to rest Alex and use him off the bench later in the game and ask Takumi and Naby to work between the lines and to join up with a twin strike force of Salah and Firmino.

It’s possible that Divock Origi might come into this mix, but he wasn’t hugely effective at West Ham and left the field late on with a bit of a knock.

My selection enables the manager to rest three of Wednesday’s front six and I think Klopp will see it this way too. The squad has to be trusted and used, and the likes of Keita and Minamino could yet have decisive roles to play in a season that still has plenty of miles in it.

If Southampton have a star, it is the energy that Hasenhuttl has injected into his team and Jürgen Klopp will appreciate, more than anyone, how will and intensity can trump most other qualities in football.

On balance, no Liverpool romp should be expected here. The visitors will be respected and then soundly beaten. Anfield knows no other way these days.

For more buildup to the visit of Southampton, and extensive reaction in the immediate aftermath, download our free Anfield Wrap app…

"It's nice to see Danny Ings back to his best.

"He's been part of the journey we've been on under Klopp, I hope he gets a great reception." 👏