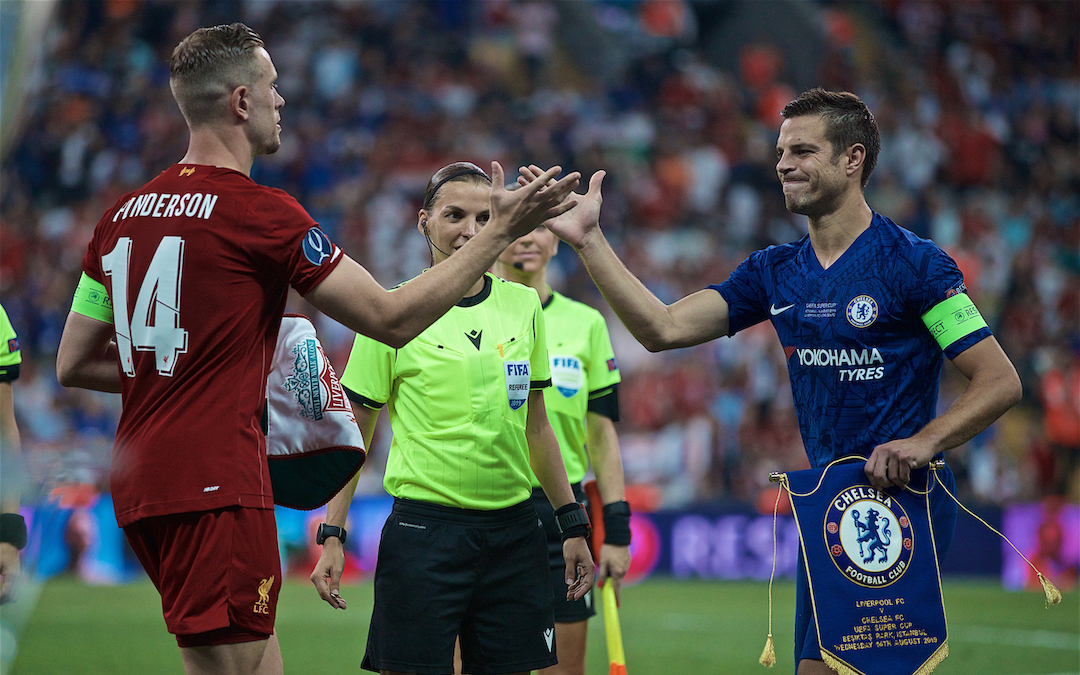 THIS isn’t going to be a draw.

Chelsea these days are a schizophrenic fantastic car crash of a side. Liverpool are nigh-on the best team in the world but one that’s just taken a disconcerting beating.

The betting has The Reds as strong favourites and rightly so. Chelsea, though, simply refuse to just accept the mantle of crap has-beens.

Lampard’s side are a series of contradictions. At once riddled with ageing rotting malcontent champions and also a team populated by some of the most prodigious youth talents in the modern game.

Pulisic, Mason Mount, Tammy Abraham and Hudson-Odoi are all in those “world young super talents to watch out for” lists. Their manager an entirely unproven and seriously doubted rookie, yet equally a progressive free spirit of a young boss committed to the academy system and all-out attacking football.

Chelsea’s results offer few clues as to the version of themselves that Liverpool are likely to face. Will it be the outfit thrashed 4-0 by an ordinary Man United team and beaten at home by Valencia in the week? Or the free scoring adventurers who tonked Wolves 5-2 and gave Liverpool themselves a massive fright in the Super Cup final last month? 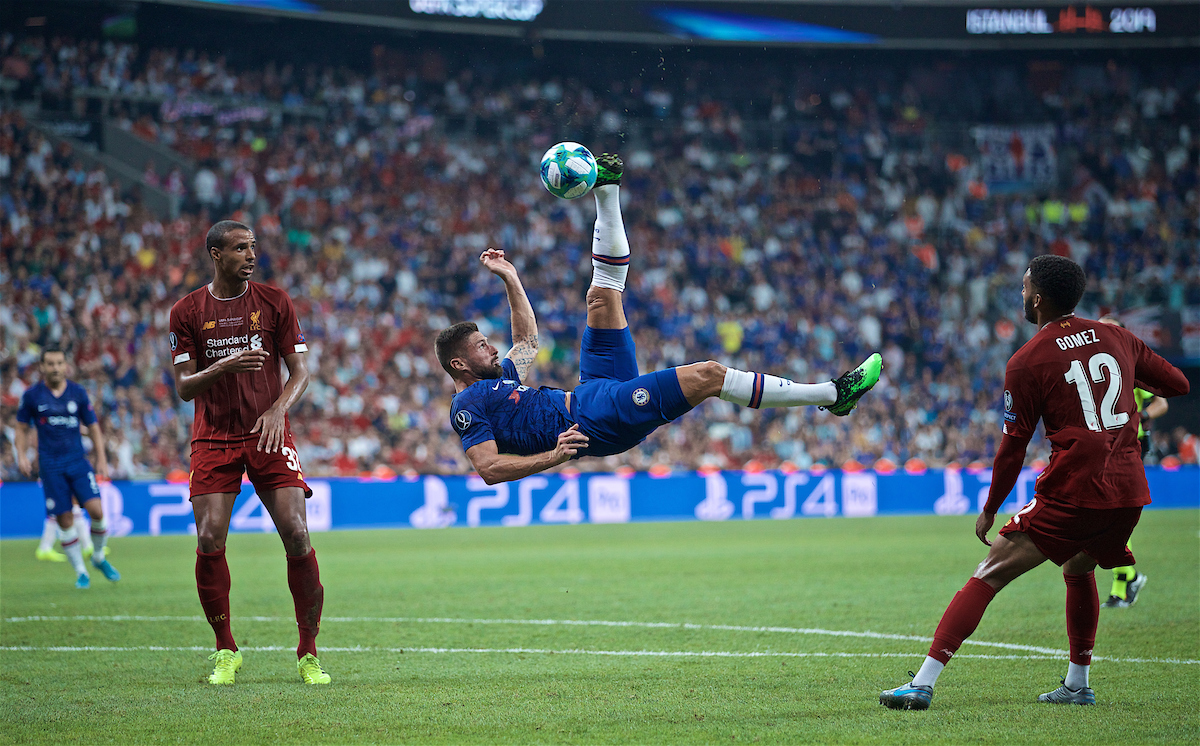 Reds boss Jürgen Klopp will try to cast from his mind the encouragement offered by the news that key Chelsea men Kante, Mount and Rudiger are big doubts for the big game.

The Londoners may not be the force they were but the depth of their squad, with stalwarts such as Willian, Giroud and Pedro still eager for game time, is a reminder that their proud past is not yet consignable to history.

The Blues demonstrated in that Super Cup clash that if they can rouse themselves enough to be able to bring their A-game then they still give anyone and everyone in world football a game.

Klopp hinted in his pre-match press conference that Liverpool’s defeat in Naples in the week was illusory. A ridiculous late penalty and a soft very late second cost Liverpool the points and suggested a bad showing but the match itself was a strange one.

Before keeper Adrian finally conceded, Napoli could not have overly quibbled if they’d already found themselves a couple of goals adrift. Liverpool had wasted chances. Moreover, The Reds had hugely wasted chances to make chances. Mo Salah knows he would have bagged at least a brace if teammates had been only marginally sharper in their final deliveries.

Klopp wouldn’t have chosen the type of test Chelsea represent so soon after a big Champions League fixture but the five-day gap between the games is significant comfort. The Liverpool manager knows a five-day span is as good as rest and will not hesitate in asking his favoured 11 to more or less go again. 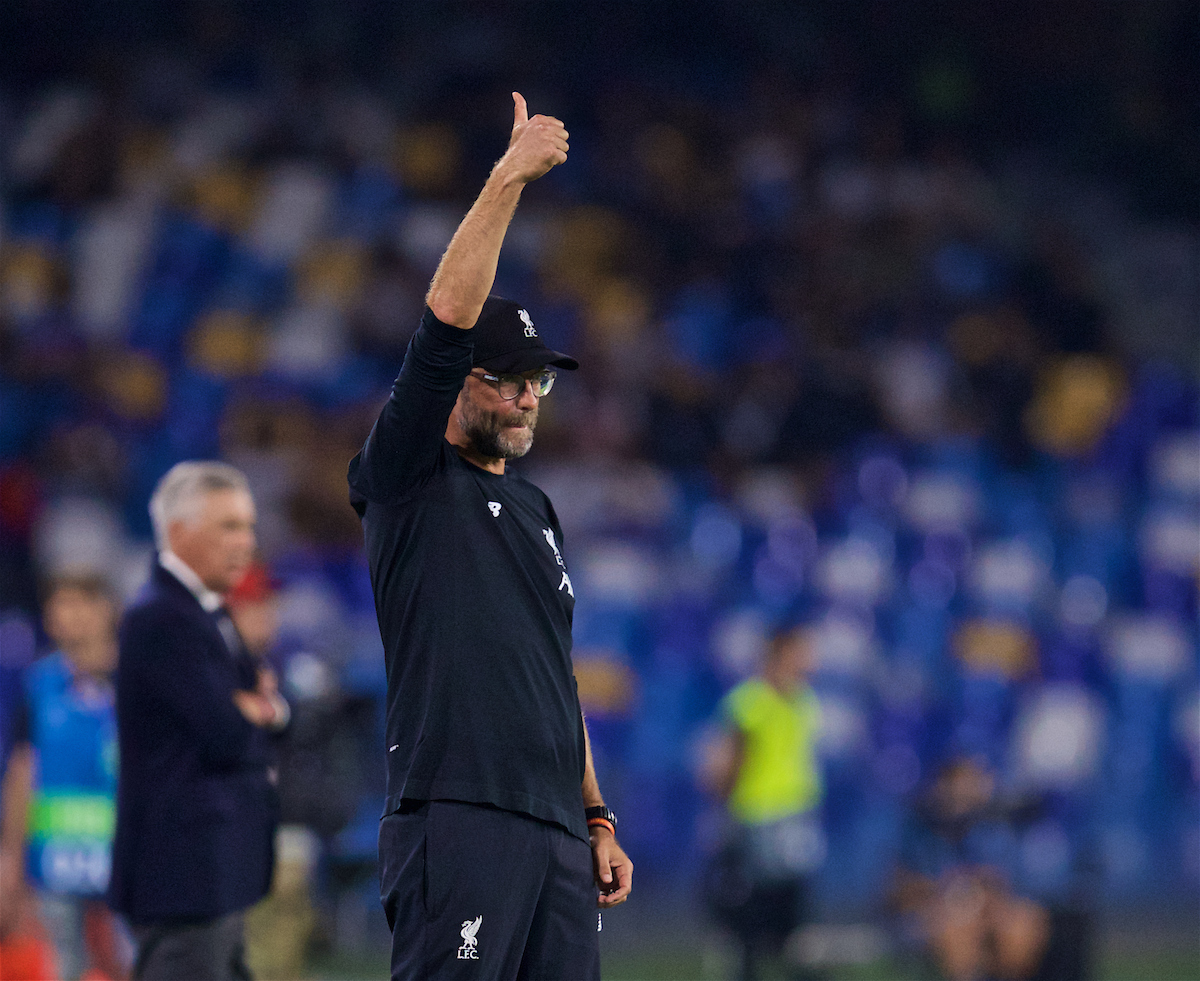 James Milner might well be Klopp’s only change, dropping out to facilitate Gino Wijnaldum’s return. The choices for the bench may be more troublesome for Klopp, especially with Naby Keita now back in training and available. Keita will duke it out with Alex Oxlade-Chamberlain and Xherdan Shaqiri for possibly just one deputy attacking midfielder berth.

First-choice reserve striker Divock Origi is unlikely to have shaken off his knock and his absence could offer the prospect of a debut from the substitute’s bench for exciting teen prospect Rhian Brewster.

The red juggernaut skidded on that wet and slippery Neapolitan pitch on Tuesday night, but the momentum they have built up will ensure that Liverpool’s onward surge towards further glories is unlikely to be lightly derailed.

Chelsea are a test without doubt, but passing examinations is what Klopp’s team thrive upon.

For more buildup to The Reds’ trip to Chelsea, and extensive reaction in the immediate aftermath, SUBSCRIBE to TAW Player…

"Liverpool are the only unbeaten team left in the Premier League… and I don't expect that to change on Sunday." ✊

📱 Subscribe for all of our buildup and reaction to The Reds' trip to Stamford Bridge 👉 https://t.co/TEMh9rqIOf pic.twitter.com/4VEawHBDRr