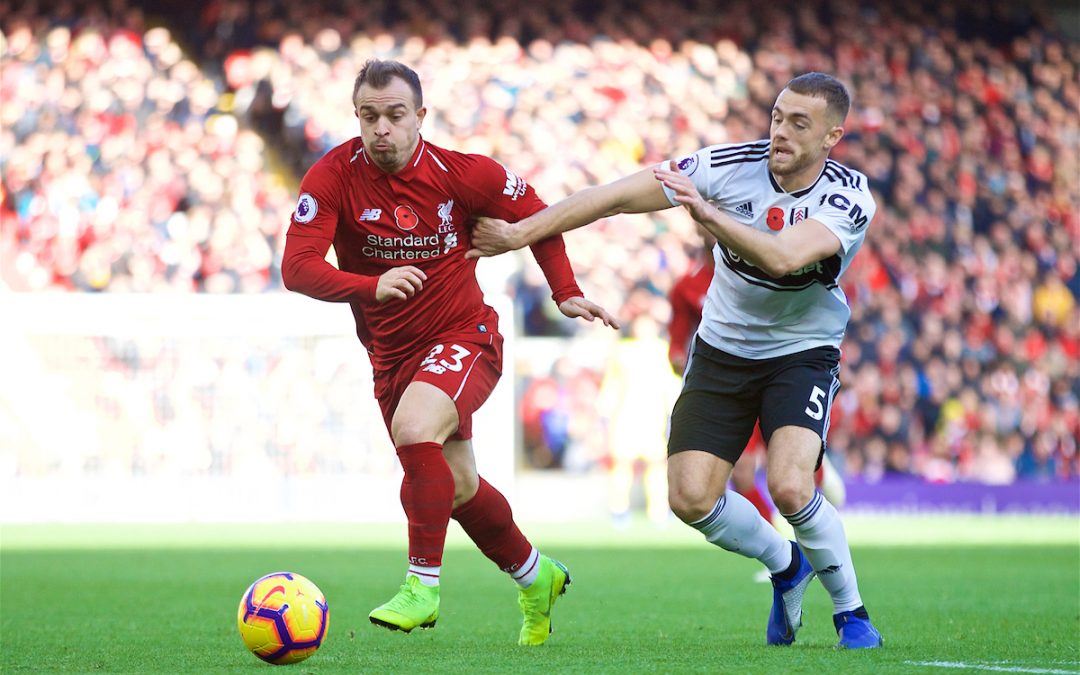 There’s nothing like a big away win, against a massive side, in peak form, where you control the game so comprehensively that it makes anything and everything seem possible again. Liverpool are basking just right now, Liverpool are bathing in glory, Liverpool have the sun on their backs again.

Beating Bayern Munich in the Allianz was a result of epoch-defining importance. Well, it has the potential to be. If The Reds allow Fulham to find a way from stopping them winning this weekend then we all won’t look so clever. But let’s not even entertain that possibility because this is a time to be a Liverpool supporter and it is right that we milk and savour every moment.

I didn’t get much done on Thursday. I was too embroiled in watching reruns of Sadio Mane’s goal from every conceivable angle. I watched and rewatched every post-match interview. I gorged on the gushing punditry. Much as the story of this campaign has been about our very real tilt at the league title, it is performances in the European Cup which still appear to define us.

There has been much talk of it being better to gracefully exit the European stage and leave greater capacity for the push to win the league, and there is sound logic to that argument. Yet only in the glorious aftermath of nights like Wednesday night can we truly appreciate how ultimately flawed that assessment is.

Liverpool will go to Craven Cottage as one of the most confident Liverpool teams in modern history. You would have to go back 10 years, to the week Liverpool went to Manchester United brimming with a self belief empowered by a 4-0 demolition of Real Madrid, to find a near parallel.

Before then, I don’t know when we’re talking about the same phenomenon. It’s not that Liverpool simply got a big result in Germany – we’ve had few of them down the years – it was the manner of victory. 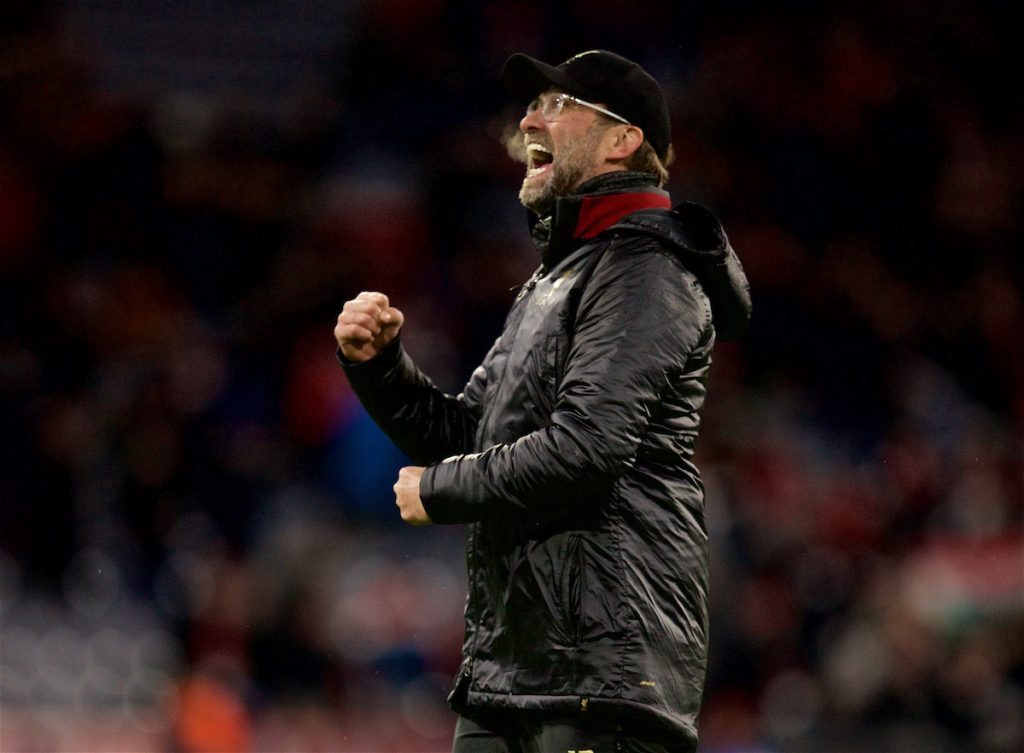 In Munich they will talk about the Liverpool side that rocked up and taught them how to play football for years, maybe decades to come. We remember the great sides that blew our minds. Cruyff and Ajax in the 1970s, that Barca team and that Overmars goal, Rafa’s Valencia, Ronaldo’s Real Madrid at Anfield in 2014.

Those nights when we knew we were in the presence of greatness and that we had to take the pain and just admire the craftsmen demolishing our beloved team. Now we are beginning to look like those special once-in-a-generation teams. Now it’s our turn.

Ordinarily we’d worry about the legs of lads who ran themselves into the ground in our cause. But, such was the nature of Wednesday’s victory, that adrenalin and belief should be ample to power Liverpool through a final 90 minutes before the international break.

Jürgen Klopp has some injury concerns but they are in midfield where the squad is best stocked. Our captain Jordan Henderson limped out of the action early in Munich with an ankle problem. Naby Keita also apparently has a “minor injury”.

Last weekend at home to Burnley, Adam Lallana earned a surprise start after impressing his manager the previous week in training. He will have accepted being dropped back to the bench in midweek but might expect a recall for the trip to West London. Fulham have lost their last six matches and are hurtling towards relegation. Klopp will treat this fixture as if it was a home game, and to that end will look to start with four attacking players.

Lallana’s main rival for that fourth attacking berth will be Xherdan Shaqiri who was yet to start a game in 2019. His Liverpool career seemed to have really taken off when he bagged two goals against Manchester United in December and he would never have dreamed then just how significantly his progress would stagnate.

Shaqiri has always come across as a naturally confident player though, and Jürgen Klopp would trust him to produce a performance should he decide to unleash him after his relatively lengthy hiatus.

Liverpool’s front three combined to stunning effect in Munich and the Liverpool manager will be inclined to let them go once more knowing that something of a rest awaits them during international fortnight (Mo Salah has already been exempted from duty by the Egyptian coach). Should Klopp look to freshen for the sake of it, Divock Origi might again deputise for Roberto Firmino. 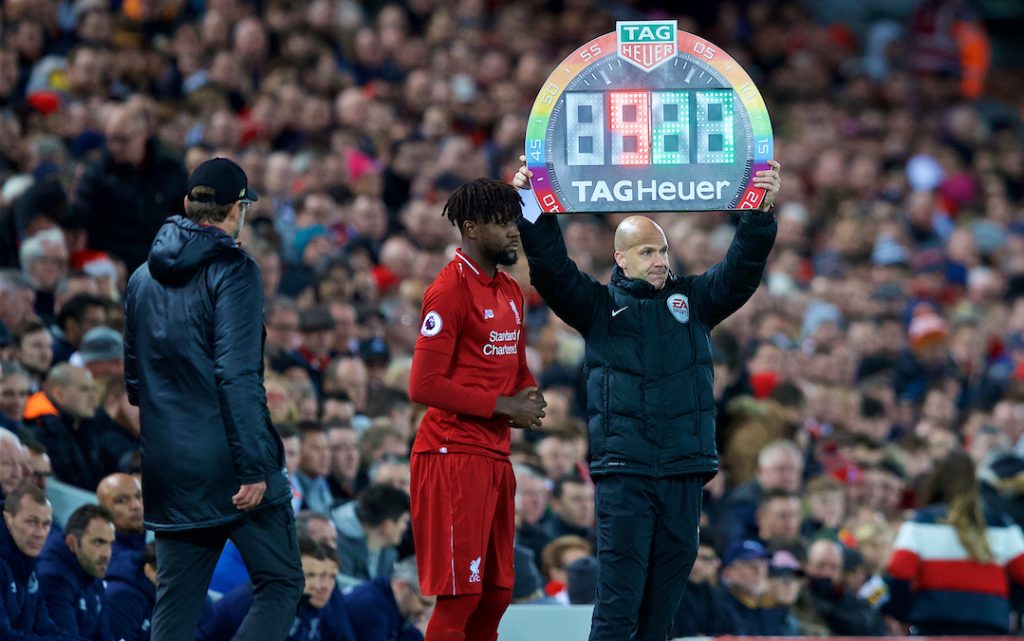 At the back Liverpool are likely to remain unchanged although there will be a temptation to give Dejan Lovren some minutes to rehabilitate him in the team, post injury.

Fulham are on their third manager of a disastrous campaign and the latest incumbent, caretaker coach Scott Parker, will hope that he gets the proverbial “bounce” that most new managers enjoy at some point. He’s only been in charge for two games so far and presided over two defeats. No bounce, just business as usual at The Cottage.

Parker’s challenge in facing up to Liverpool’s visit will be whether or not to try and frustrate an awesome opponent or just go for broke and gamble. Draws and narrow defeats are of zero use to Fulham right now. They need wins and only wins.

Parker may, though, have his eye on preserving dignity rather than chasing rainbow wins. The new boss will know that the game is virtually up and that he is better served being seen to restore some pride. How he convinces his players to buy into such an abstract objective is a more complex ask.

For The Reds it’s a case of let’s get our heads out of the clouds and down to the task at hand. We would go top of the league by beating Fulham (albeit City would have a game in hand). It’s an opportunity we cannot afford to squander.

It’s the place we’ve deserved to be.

For more buildup to The Reds’ visit to Fulham, and extensive reaction in the immediate aftermath, SUBSCRIBE to TAW Player…