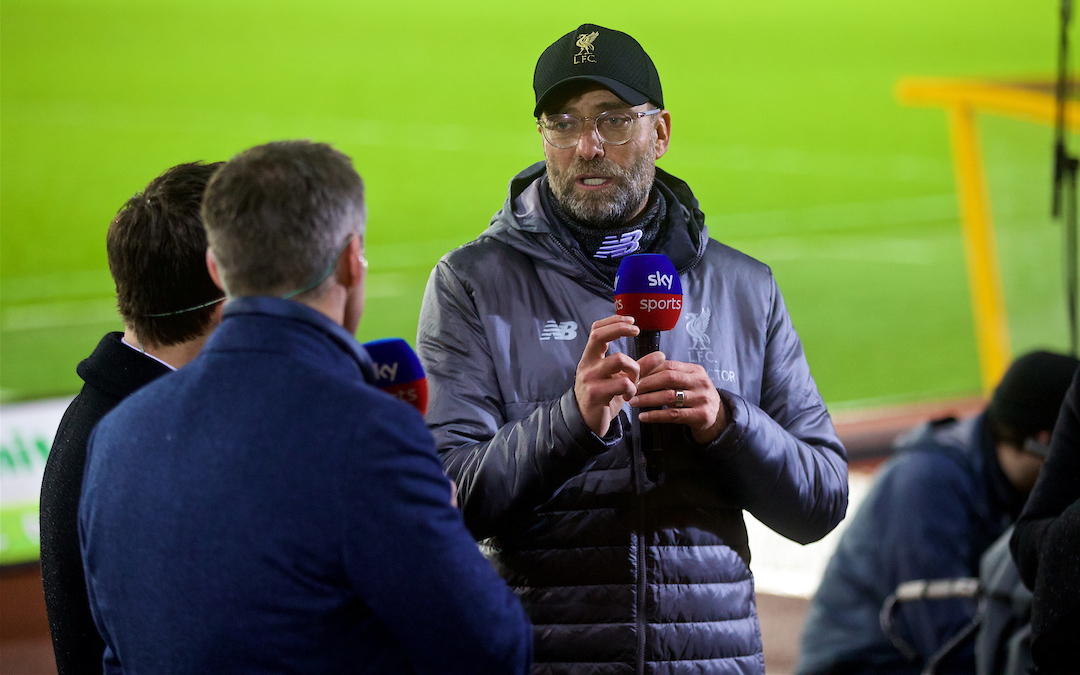 I HAVE often questioned the “is the glass half full or half empty?” proverb.

Mostly because I don’t think I’ve ever heard anyone say “half empty” in any other context.

I’m not convinced it’s a real saying, like Fred Astaire suggesting that some people pronounce potato “po-tah-toe”. Good job they did call the whole thing off because he was having an absolute mare, there.

The purpose of the saying, is of course, to point out that some see the positive and some see the negative in what is essentially the same thing. One thing I have noticed, particularly recently, is that despite our enthusiasm and hope, glasses seem to be widely half empty when it comes to football.

We can give plenty of brash, cocky and downright arrogant backing to our teams in immediate moments of success, but if even the tiniest of wrenches is thrown into the mightiest of works, many of us go all funny and start doubting whether it’s all about to start crashing down. We then wonder which bastard drank half of whatever was in our glass.

An example of jumping into panic mode unnecessarily came last week when Sky and BT announced their latest round of televised games for March. The eagle eyed saw straight away that it meant Liverpool playing after their title rivals Manchester City nearly every single week.

Seven of the next eight matchdays see The Reds kick off after The Sky Blues. Even City’s fixture away at Everton that had been scheduled for the same weekend as Liverpool’s trip to Manchester United has been moved to next Wednesday (February 6), so Pep Guardiola’s men get a two and a half week head start on that one.

City play Newcastle tonight before Liverpool host Leicester on Wednesday, and apart from the weekend of February 9-10 when the league leaders play Bournemouth the day before City are up against Chelsea, every other set of fixtures until matchday 32 sees the champions play first.

This gives them the opportunity to close the gap on The Reds each time and, supposedly, put Jürgen Klopp’s men under pressure.

However, an explanation as to what the difference is between the pressure of going first or second was never really made clear.

The main jumping off point seemed to be scoreboard pressure. By seeing, for example, City beat Newcastle tonight, bringing them to within a point of the top when Liverpool play Leicester 24 hours later, The Reds are apparently likelier to wilt under such intimidation.

In recent weeks, there have been a number of times when Liverpool have gone first into battle, laying down the gauntlet by going seven points clear, only for City to respond and come back to four.

However, City’s form has been such that, if anything, it seems chasing down a points total is a happier place for them. They have been motoring along and battering teams under what is surely more pressure than Liverpool will be under as, at least at the moment, Klopp’s lads are ahead. 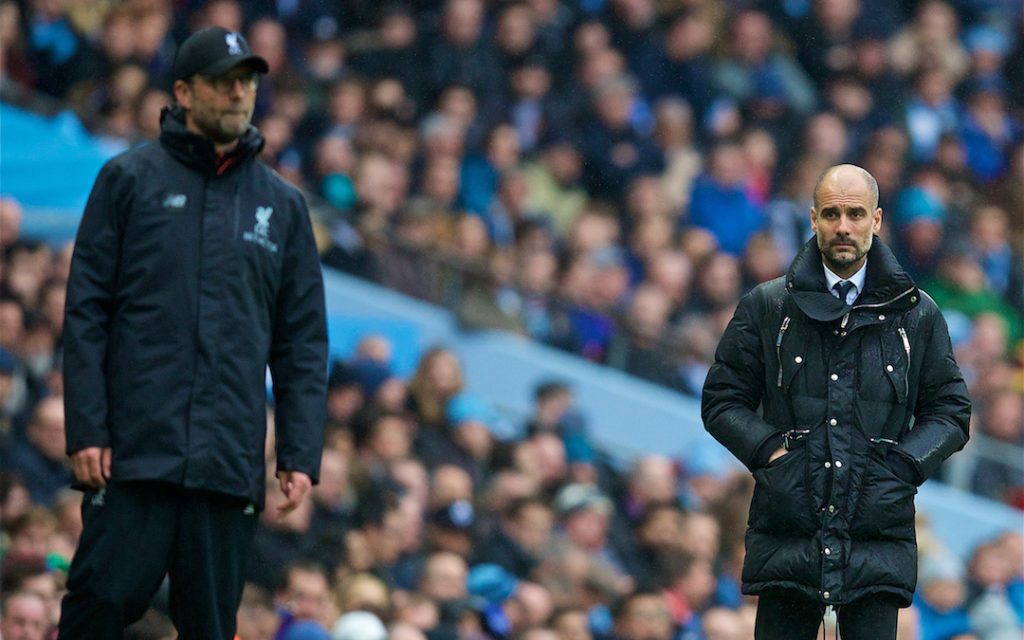 Is the assumption that City have cooler heads than Liverpool in this scenario as they’ve been here before? If so then surely, regardless of the order of games, people must doubt whether The Reds can last the distance?

If they’re so mentally fragile that the appearance of a tighter gap in the table – without factoring in the extra game played by the rival – causes them to think and act any differently, then frankly they won’t deserve to win the title.

You must also ask yourself the question, is it more derailing for a team to gain an advantage and then lose it, or lose an advantage but claw it back? It is something Liverpool have had to put up with recently themselves, but now those who see the glass half full might think that they have the chance to do it to City.

I do find it weird how much is made of the gap opening and closing over a weekend as teams play at different times. I suppose it’s deliberate on the media’s part, forever stretching to make something uninteresting sound terrifically fascinating, like a Burnley game, or Paul Merson’s opinion on anything.

Recently we have seen Liverpool win and the headline is “Reds go seven points clear” with no mention of City’s game in hand. Then City win and it’s “Blues cut gap at top to four points”, which makes it sound like they’ve done more than merely get back to where they were at the start of the weekend.

Ideally, they’d wait until both have played and say “nothing’s changed”, though I imagine the clicks for that nugget won’t be quite as plentiful as, say, “You won’t believe what Mark Viduka looks like now!” (Exactly the same as he used to I would think, maybe a bit fatter and a bit greyer).

That is not to say that a little bit of mild pessimism isn’t justified. There have been near misses for Liverpool in recent times, and now that the Holy Grail is in sight, albeit with a fair distance still to go and up against possibly the strongest team the country has seen since the late ‘80s, it is no surprise that the smallest margin of potential error is being found. 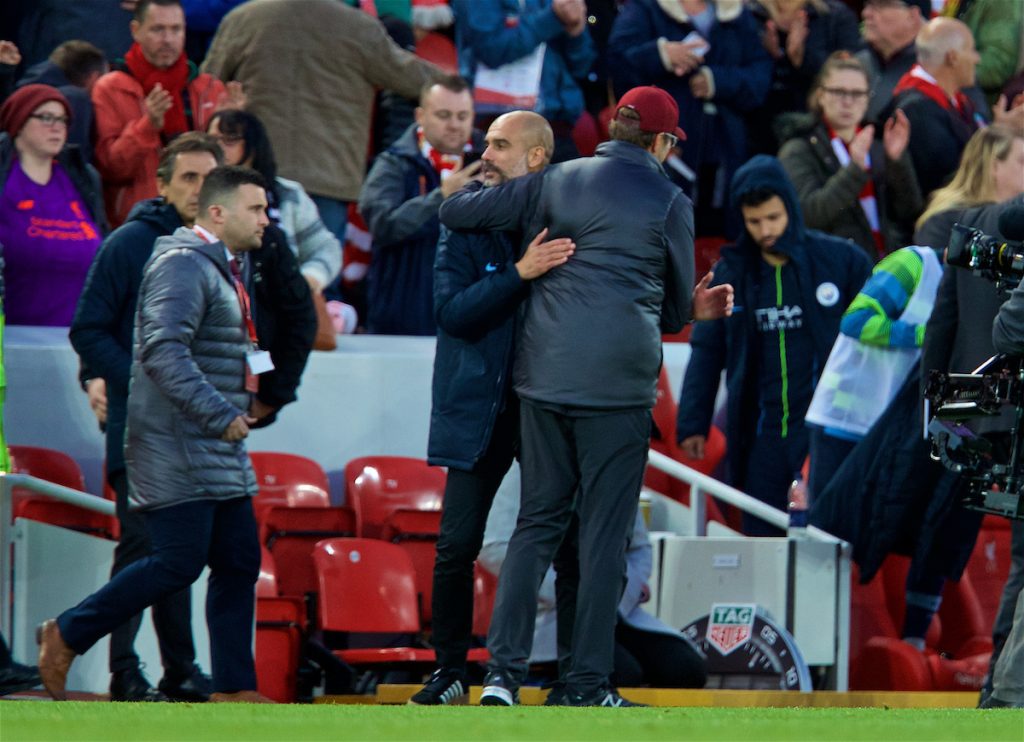 However, it must also be remembered that this Liverpool side is made of more. More than they have been since those late ‘80s teams. They have proved time and again this season that they are mentally strong. Hard as nails in the head department, unwavering and unintimidated.

There is no indication that they are going to let something like playing after their title rivals, rather than before them, make their approach to games any different.

It’s not that there isn’t pressure. Of course there is. This is set up to be one of the most intense title races of all time. One in which it is far from silly to suggest that both teams might win all of their remaining games. It’s just that the pressure is there, regardless.

If Liverpool play first, they need to win otherwise City have the sweet motivation of genuinely cutting the gap. Play second, and the pressure is there to get the gap back to where it was.

Everyone should be expecting City wins. They’re very likely, as any bookmaker will tell you. Should they beat Newcastle tonight, or even hammer them, it should change nothing. The Reds and the rest of us just need to remain calm and ensure that we match them by doing what is required against Leicester, and so on.

Liverpool’s glass should be half full. They shouldn’t worry about City closing the gap. City should worry about the demoralising effect of getting their fingertips on Klopp’s men, only for them to pull away again.

What’s that? Virgil van Dijk’s a doubt? *smashes glass and throws a po-tah-toe at the wall*

“Liverpool couldn’t have picked a better time for a break than after the Palace game. Now we need to go and beat Leicester and show how good it’s been for us.” 👏