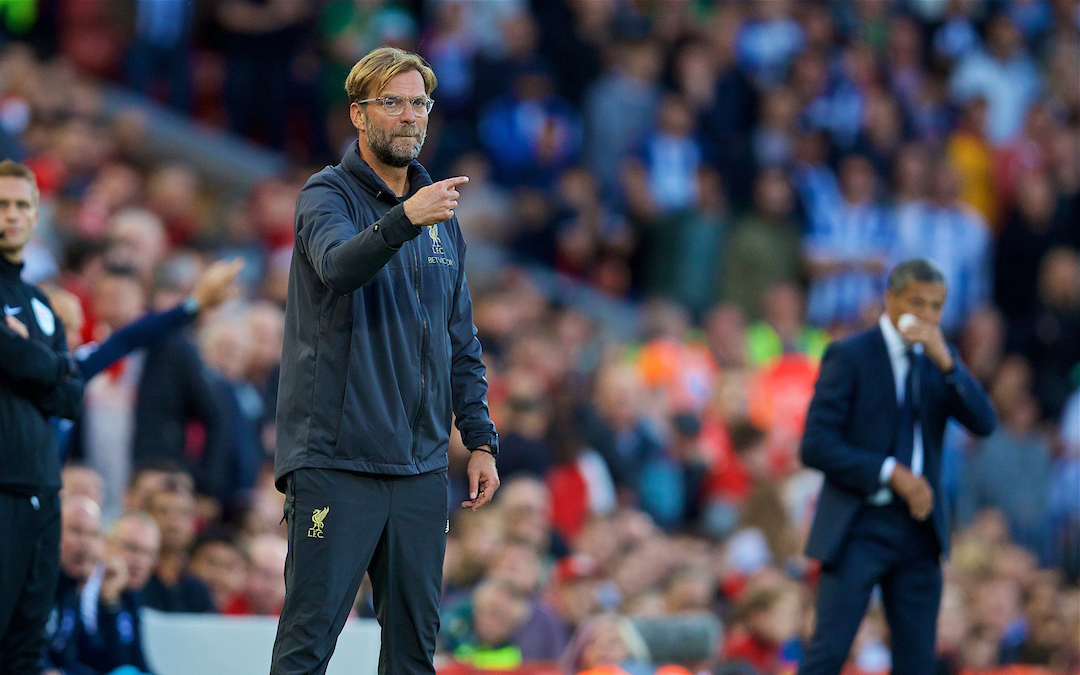 LIVERPOOL’s 5-1 win at Brighton last winter was one of my favourite games of the Jürgen Klopp era.

The Reds were unbelievable that day. It rained goals. So many, that I missed two going for pisses. I didn’t care though. It was a joyous afternoon and an indicator that this Liverpool team were readying themselves to become the force they currently are.

The stakes are much higher as Liverpool travel to the deep south this term. We’re massive favourites to dispatch Chris Hughton’s team but nothing can be taken for granted.

Any kind of Liverpool win should be savoured. It’s not important that we’re as fluid or destructive as the Liverpool team that tore Brighton apart so comprehensively a year ago. We need only focus on the points.

The long unbeaten run and winning sequence was broken at Manchester City’s Etihad Stadium about 10 days ago. The ends of runs are dangerous phases. Many sides don’t take becoming mortal again well. Look at City themselves.

A blue streak at the top of the league till December before defeat at Chelsea saw them go on to lose a total of three in five Premier League outings. Liverpool sit proudly four points clear at the league’s summit because they were able to exploit City’s mental fragility.

Piece by piece, Guardiola has set about rebuilding the confidence in his team that had previously made them so formidable. He has led them to seven and nine-goal wins in their two games since beating Liverpool. 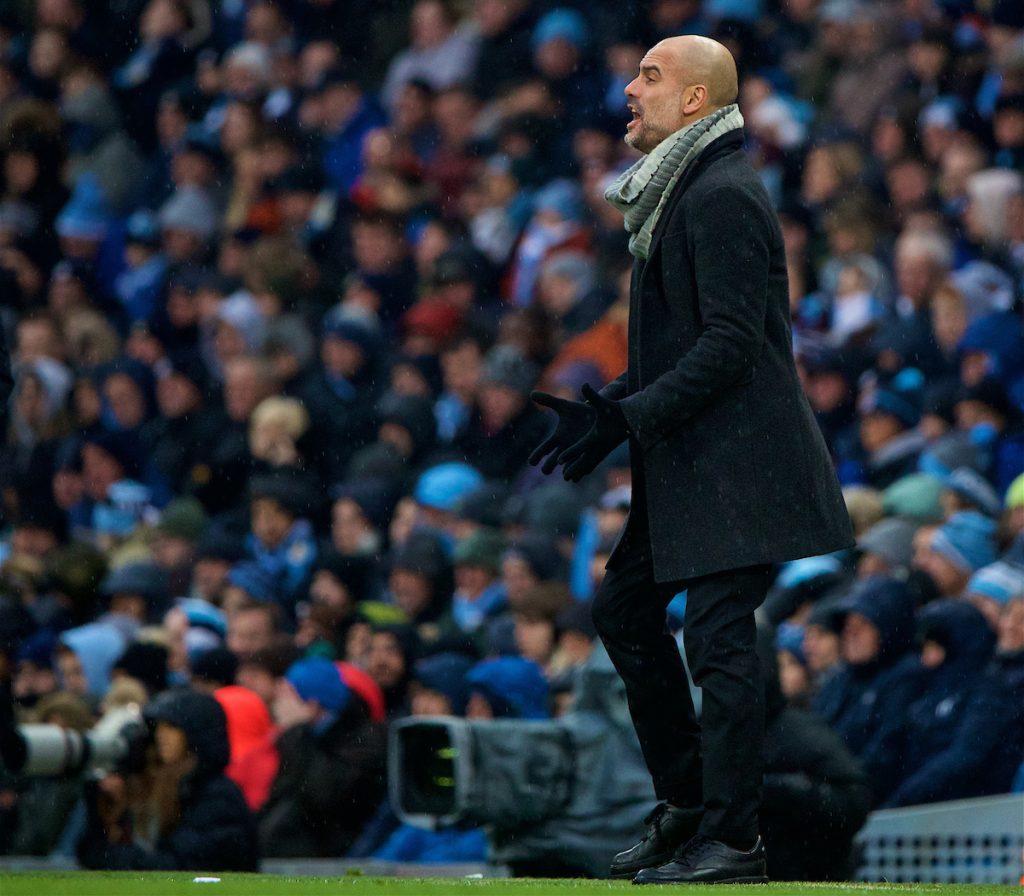 Although the opposition they destroyed was lower league, it was telling that City took both games so seriously. Guardiola was prioritising momentum. He realises that momentum was the key to their 100-point title triumph last season.

I suspect Klopp would like to have followed suit and picked his best team at Wolves on Monday night, but he doesn’t have the squad depth City enjoy. The FA Cup was sacrificed to prevent the burnout of key individuals. The price paid was a second consecutive defeat. Losing can become a habit. Just ask Guardiola and City.

Therein lies the scale of the challenge Liverpool face this weekend. It is not simply Brighton who await in our path but our own demons. The monsters that disseminate doubt and gnarl away at confidence. Klopp knows his men must slay the dragons first to defeat Brighton and move on.

It helps to be able to put out a side brimming with freshness after a testing and congested fixture programme. Let’s predict that we’ll see around nine or 10 changes from the side beaten in the FA Cup.

Although criticised — perhaps harshly — for his performance at Wolves, I can see Naby Keita keeping his place and being one of two to do so, alongside fellow summer signing Fabinho.

Fabinho will be relieved in the knowledge that his likely second start as a centre back for Liverpool will be to the side of the imperious Virgil van Djjk. Joel Matip is back in training but unlikely to be risked so soon.

Also welcomed back will be the keeper Alisson, and first choice full backs Trent Alexander-Arnold and Andy Robertson. 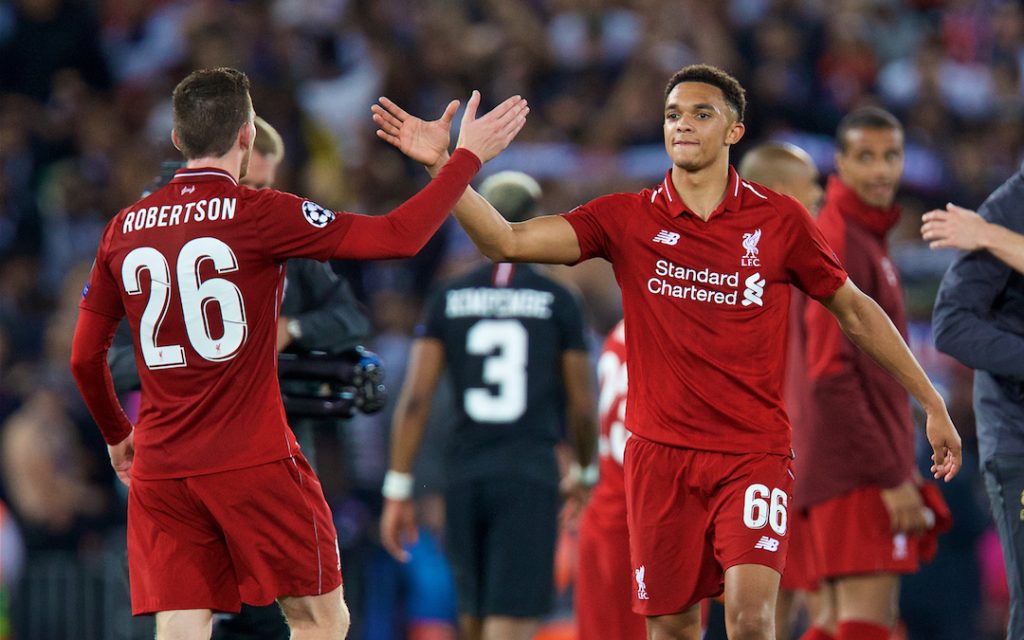 Chris Hughton set Brighton up to frustrate Liverpool last year and to use the attributes of their big men to counter threaten at set pieces. Expect the same again. Brighton’s home record was a fairly proud one before Liverpool rocked up last December. This year it’s similarly decent — won five, drawn three, lost just two.

They don’t ship goals readily either, suggesting that they can defend even against an attack as vaunted as Liverpool’s. Let’s recall they restricted us to a single goal at Anfield earlier in this campaign. Having said all this, they have only won one of their last six Premier League games and been defeated three times.

I think Klopp will lineup with an attacking 4-2-3-1 formation, asking Keita to effectively be the fourth forward in tandem with Mane, Firmino and Salah. Behind them Henderson and Wijnaldum, rested in the cup, should anchor.

On paper, on grass, the 11 Klopp presents on the south coast should be far too strong for the home side. A manager who has mastered minds throughout his career will be tested this weekend.

If he gets his boys right, they win, and the path to the league title suddenly looks clearer again.

“We’ve played 14 games against teams outside the top six this season, we’ve won all 14… let’s just go and beat Brighton.” ✊

🗣 Subscribe for all of our buildup and reaction to Liverpool’s trip to the AMEX stadium 👉 https://t.co/lmNtBz4ADz pic.twitter.com/8ue3OA6nYL