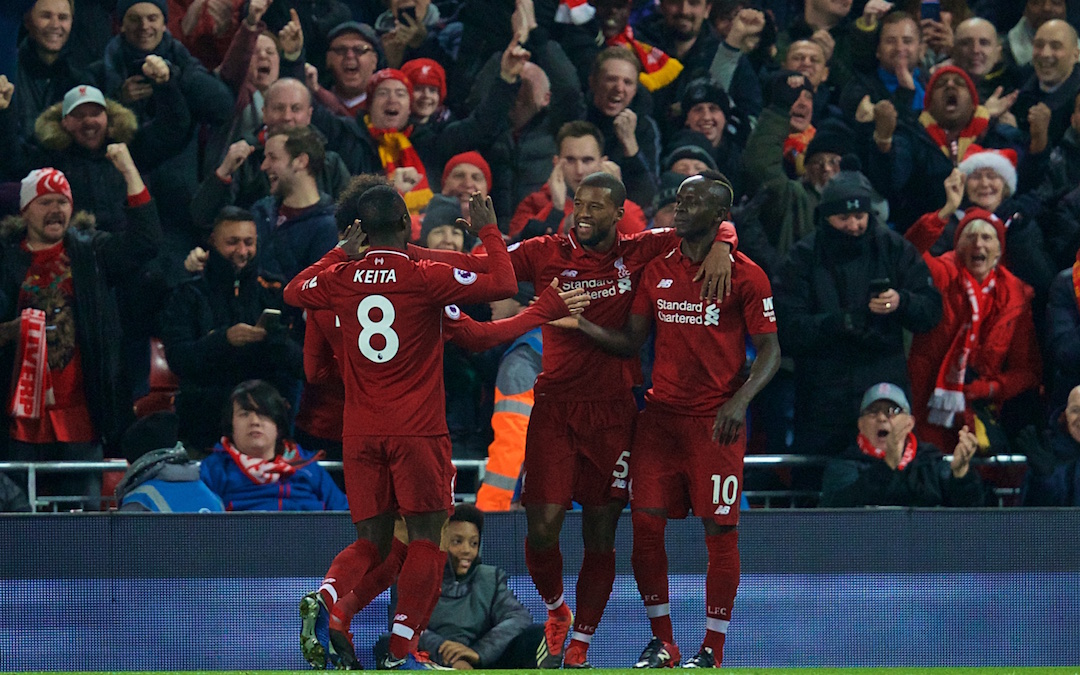 I DON’T know about you, but I’ve done a lot of looking at the table this week.

Maybe it is the Christmas wind down where you don’t really do anything important, in a “fuck it, that’s 2019’s problem” kind of way. Or because, thanks to those lovely lads at Stamford Bridge, we are finally top of it.

Maybe it is just the realisation that — with a record of played 17, won 14, lost none, with 37 balls in their goal, only seven in ours — we are potentially watching by far the greatest team, the world has ever seen. Or maybe it is all lovely mixture of all three.

Took us a while though, didn’t it? To get properly excited, I mean. In all the worry of “not clicking”, Mo Salah not smiling and the possibility of Manchester City winning forever, we didn’t really get going as a fan base until old short arms dropped one on the bar and Divock Origi nodded it in.

Since then we’ve all got lost in a sea of Jordan Pickford impressions, Xherdan Shaqiri celebrations and deciding how we are celebrating come May (riding the horse statues outside St George’s Hall with my undies on my head for me, Clive).

Of course, the inevitable reaction from the rest of the country has been to tell us to pack it in. Not because seeing Scousers happy upsets them, of course, but because of some very genuine concerns about our welfare. You see, we always get excited and always get let down, so they must think we are much better off never getting excited at all.

The most “concerned” of all are of course Mancunians. Who worry that if we get all excited now and don’t win the league we might end up looking silly. Because apparently the most important thing in the world is to stand around in a big fucking coat and not bring any attention to yourself.

Well apologies to the fine people of Manchester, but I gave up pretending to be cool years ago. I think it was around the time in school when I tried to remove a spider from the classroom to impress a teacher I fancied, only to end up with it in my hair. Or it could have been any of my public failed seduction techniques otherwise known as my “teenage years”.

Either way, around my 20th birthday, I gave up caring what anyone I knew thought about me — not least the internet. And that was before the internet was really a thing.

You sense that we are a more excited bunch than most. But I would dispute the fact that we always expect the best. There is a quote from a Bishop of Liverpool on how he found the people of Liverpool to be a curious mix of optimism and pessimism. In that if you tell a Scouser something will be brilliant they will be immediately suspicious. But if you tell them something will be a disaster they say “don’t worry, it’ll be fine”.

Basically, if you want the people of Liverpool to stop telling everyone they are going to win the league, the best way to do it is stop telling us we won’t. The more we are told we shouldn’t get excited too early, the more days we’ll book off in May. And if it doesn’t happen? Well, there is always next year. Famously. It’s not just a saying Liverpool fans invented. That is how footy works.

Enjoying the ride is very much part of the experience and if Liverpool fans are the only ones who seem to get that, then everyone else is getting it wrong, not us. If Liverpool beat Wolves on Friday they will find themselves top of the league on Christmas Day. What a lovely thought. Maybe the Queen will give us a shout out in her speech? Imagine the fume then.

“There’s a sense of unfinished business from the summer…” 👀

🗣 Subscribe and listen to our latest ‘Gutter’ show, looking ahead to the January transfer window 👉 https://t.co/lmNtBz4ADz pic.twitter.com/77BXXl6sSH