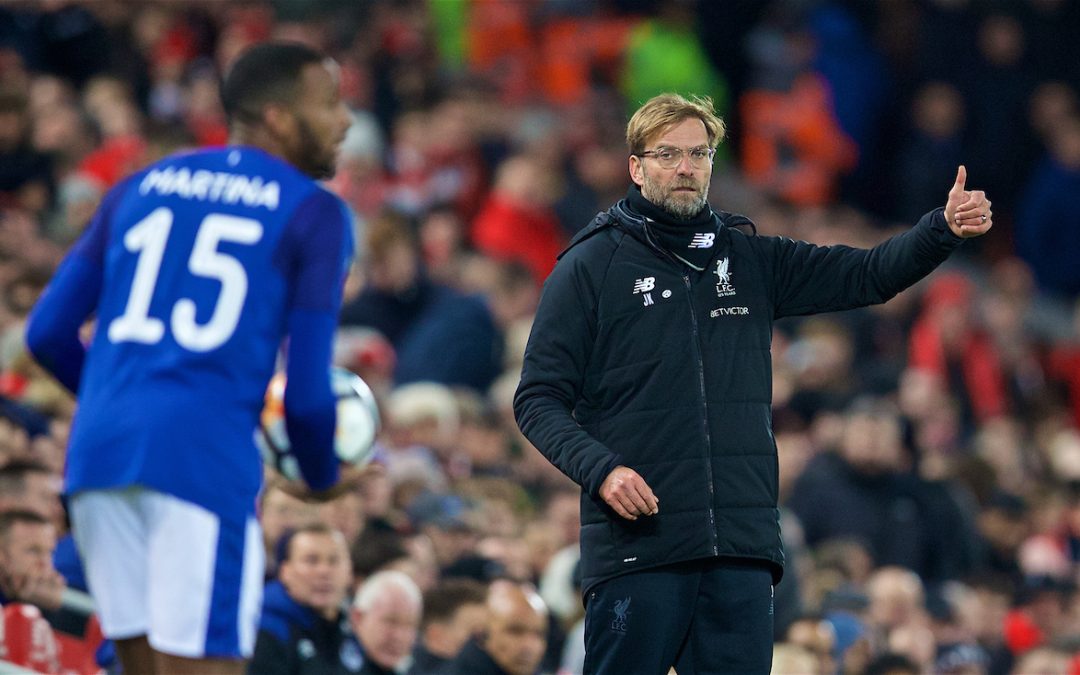 THE Blues. The fucking Blues. And I guess that’s why they call them The Blues.

I just cannot be arsed with them right now. And annoyingly, inevitably, they will be so invested in this weekend’s derby.

Blues, blue men, blue people, you may well get your win, that win, this time, but you can’t make us really care. Of course, we hugely need the points. But we don’t need the spoils. You Blues are simply not our business.

I think this Everton team has enough to become the best Everton team in a generation. It’s a team that, in the finest traditions of 21st century Everton, can, on their day, be “a handful”. Liverpool will not get it easy on Sunday. I’d love easy, but nothing about this season feels care free.

I like this Everton side. I think Richarlison is a footballer. The rest are like a who’s who of Liverpool dream signings from five years ago. We shouldn’t sneer. We’ve come along way. There, but for the grace of god, are we regarding Andre Gomes and Yerry Mina as game-changing acquisitions.

I’m just back from Paris and the experience has changed me. I’ve returned with all kinds of airs and graces. All the moules and escargot have gone to my head. I think I might be too good for Everton just right now. I’m ripe for some serious hubris.

League games post Europe are a phenomenon in Liverpool’s history. We have conquered all of Europe, and in the process of doing so have played many subsequent bread and butter games at half cock. Bob Paisley knew it was impossible to reprise the fire and fervour of a season-defining midweek in Europe against the likes of Stoke and co back home.

A mid-80s Liverpool side limped to a forgettable 1-0 win over Sunderland at Anfield after a legendary European excursion. The Kop was fretful that afternoon, but Bob P was sanguine about it all. He expected “flat”, and flat was delivered. He was so at peace with second gear that he even substituted Craig Johnston, who had not been exerted in the European game, for fear that his freshness and enthusiasm might over stretch his wearier teammates. Anfield booed the change that afternoon but wise Bob secured the precious three points.

Wily and wise Jürgen Klopp must do the same this Sunday. The Blues will be vibrant and straining at their leashes after a Liverpool-obsessed week of preparation at Finch Farm. Gylfi Sigurdsson et al have gone to sleep seeing only red. By contrast, Mo Salah, James Milner and Sadio Mane haven’t thought about Everton. Not even once.

Part of me thinks (hopes) that our indifference will give us an edge. Not that we should need that edge. We are simply better than them. But our two-decade superiority over our blue cousins can partially be attributed to calmness in the face of their frenzy. We have remained productively distracted while they’ve whorled like hapless dervishes around us.

Things were far from perfect for Liverpool in Paris on Wednesday. Not for the first time this season, we failed to find the level that we seemed to rise to at will, last campaign. It could be down to our earnest midfield; then warrior like, now workman like. We need more from the engine room. Naby Keita was bought to provide that. There were hints in the French capital that he may be readying himself to step up to the plate.

The captain, Jordan Henderson, is suspended for this derby, so Keita will start. I’d also like to see Joe Gomez reunited with Virgil van Dijk in the centre of our defence. I’m not seeing what Klopp is in Dejan Lovren. A settled back five is the way forward.

In attack, Roberto Firmino continues to baffle. Last term, our heart and soul, but now too often a flailing passenger. He needs a break. I’d draft Shaqiri in and back him to do his worst. He’s got Everton written all over him and I’d like to see the Swiss given the opportunity to write his name into derby folklore. Big time. In blood. Dripping, drained, blue blood.

Let’s sink some teeth into these, Reds.