Has Divock Origi Earned Himself A Lifeline At Liverpool? 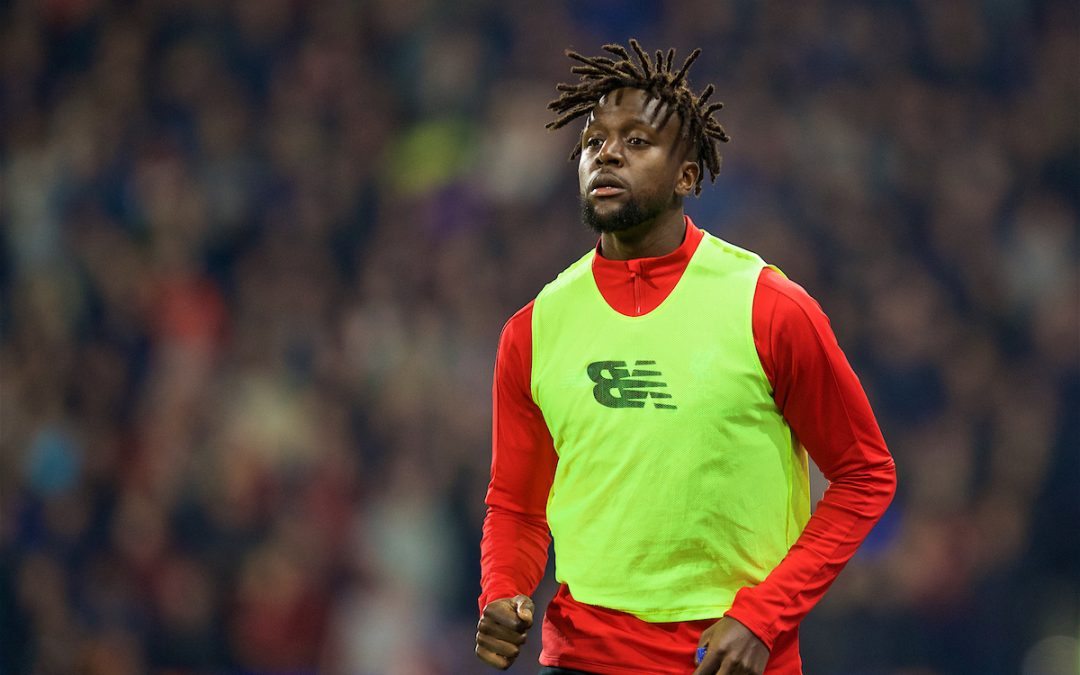 THE Kop was transformed into a living picture of flailing limbs.

Screaming faces and a wild outpouring of raw emotion that only an injury time winner against your rivals can paint, but few will have thought of the man responsible for that moment of beauty at the time.

As most around him stopped and stared, as Virgil van Dijk turned away in disgust at his miscued shot, as a gleeful Evertonian threw purple pyro onto the Anfield pitch to mark victory in a draw, Divock Origi carried on regardless.

He found himself rewarded for following it in and playing to the whistle – just like the coaches always tell you to.

Whatever you think of the Belgian – and it was clear many were not particularly overjoyed at seeing the 23-year-old take to the pitch in the Premier League for the first time since the opening day of last season – he did his job.

OK, he should score in the final minutes of normal time, and was bollocked accordingly by van Dijk. But in his 12-minute cameo he had an impact, showed spirit and created a moment that he can forever recall with a smile.

Whatever Origi may be now, or in the future, he will always be the man who picked up on Jordan Pickford’s pondering and found the net in the 96th minute of a Merseyside Derby to secure a memorable and momentous win. 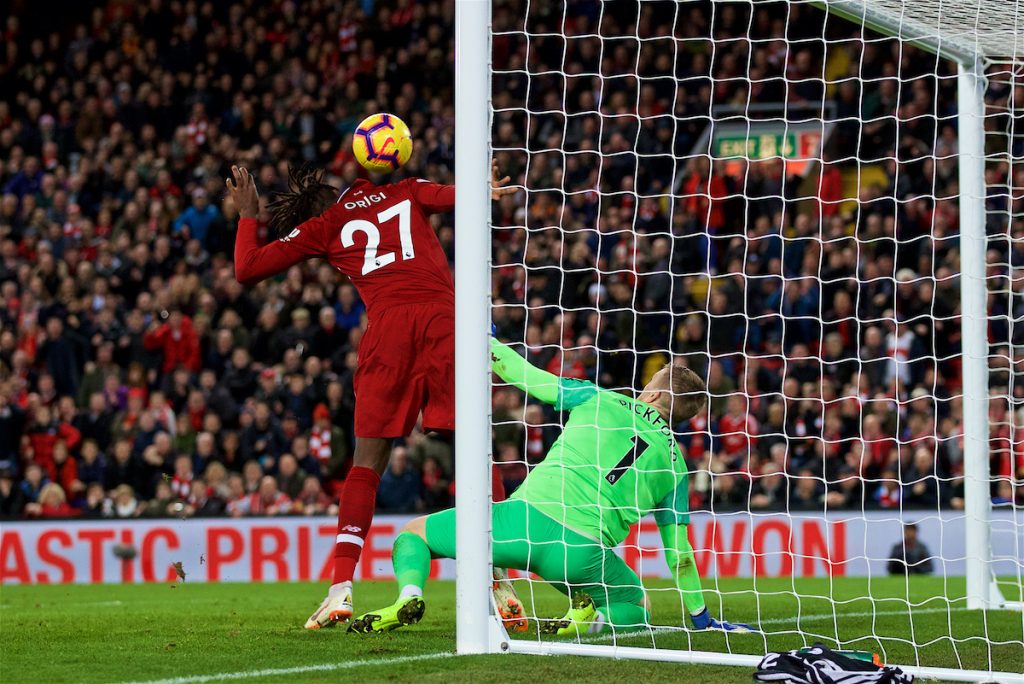 His first goal for The Reds since May 2017 – and his third in home league games versus Everton ­– could well secure some cult status for the man who now has 79 Liverpool appearances and 22 goals to his name.

It also kept belief burning that this title challenge is real. A four-point deficit, allied to Manchester City’s superior goal difference, would have been just the buzzkill The Blues in the Anfield Road end were praying for pre match.

It also can’t go unsaid that Origi’s fortunes at Liverpool took a nosedive in no small part thanks to the club he left down and out yesterday.

The gentle giant doesn’t seem the type to be sticking two fingers up to anyone anytime soon, but let’s do it for him. Origi has struggled since the serious ankle damage he was left with after a foul by former Everton defender Ramiro Funes Mori in 2016.

Mori was red carded for the “challenge” and left the pitch grabbing the Everton badge and gesturing to the travelling Toffees, many of whom gleefully applauded him off.

Funny how these things come around, isn’t it? And even funnier when you consider Origi has been linked with a January move to Goodison Park.

So what now? There is a case for a start on Wednesday at Burnley to rest some of the lumbering limbs of a front three that is looking laborious at times. 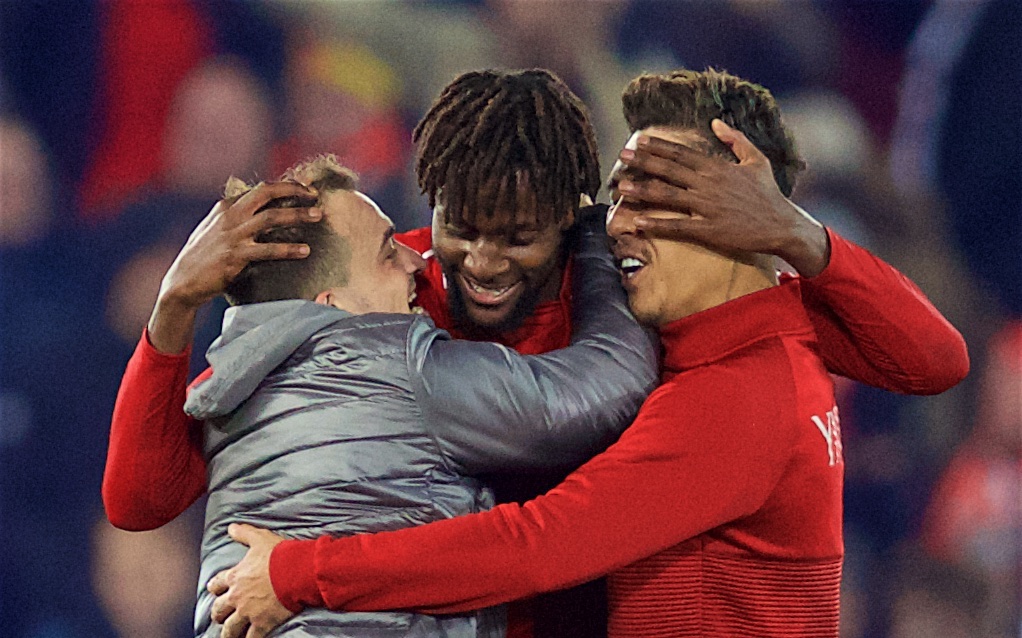 If Origi is going to shine in red again then, with less than a month until bids can be placed for his services, surely now is the time.

The inevitable “shop window” argument is also an aspect to consider. Liverpool didn’t keep much of a lid on the fact that, had a club bid £26million in the summer, he would not have been around to stick it to The Toffees in such satisfying fashion.

Will one moment, one glorious moment, change that? Will Wolves come back? Are Dortmund still sniffing?

There remains a feeling that there is something there with Origi but is it enough for where Liverpool are, and where they aspire to be?

Jürgen Klopp was happy to utilise him in his first match as Liverpool manager away to Tottenham Hotspur and also revealed back then that he had tried to sign him for Dortmund.

A hat trick in the League Cup away at Southampton followed, before he scored in both legs of the Europa League quarter final against Borussia Dortmund, finishing the season with 10 goals from 33 appearances.

It also emerged that Origi had been ordered to bulk up around this time, again suggesting that Klopp saw raw talent he felt he could mould into something more. 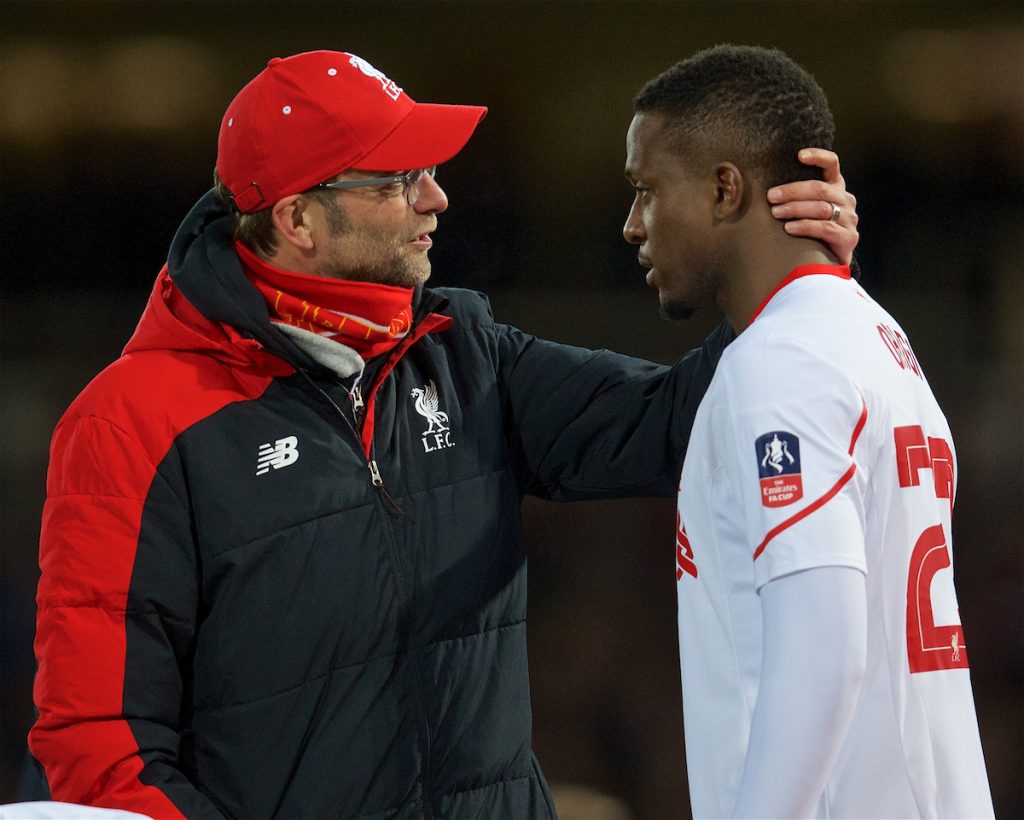 Has too much water passed under the bridge since those days for all involved?

Or could he turn around his Liverpool career at almost as late a stage as he turned round Sunday’s match?

Klopp’s words in public are hardly an indication of anything, as we have seen with managers in the past. But he rightfully offered some encouragement when asked about Origi post match.

“It all changed a little bit, you lose confidence and you don’t play from here anymore,” said Klopp of Origi’s injury.

“When Divock played at that time he was an unbelievable threat, he had speed, he was strong, remember the Dortmund game and stuff like that.”

Everyone does. And if he can get back to that level, who knows?

Meanwhile, as we went mad, as you screamed, shouted, hugged, kissed and punched the air, how did it feel for a player who created that moment after months of misery? 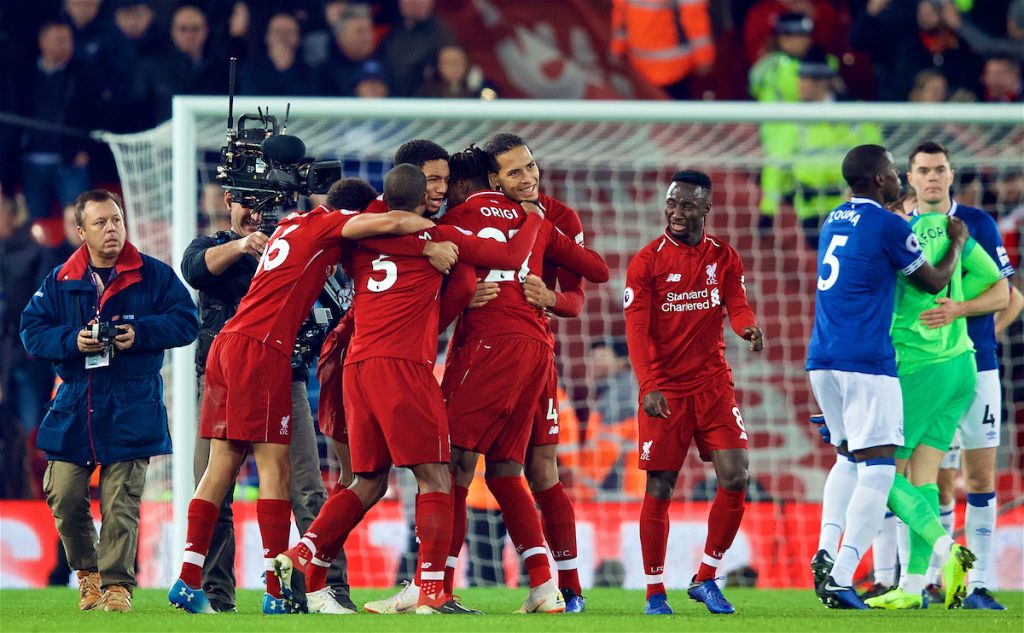 “You could see the emotion of the fans and the coach and the players so we celebrated all together,” said Origi. “It is a good day for Liverpool.”

Too often we don’t think of things from their perspective. It’s been tough for Origi and it’s clear he’s struggled both mentally and physically at times.

Now though, he maybe has another chance.

“I just try to focus on what I can control and that was training well and shining my light,” he added.

Right now his light is shining brighter than in a long, long time. The Divvy that helped to down Dortmund could be back to show the fickleness of football once more.

For more reaction to another dramatic derby win, SUBSCRIBE to TAW Player…

“What a moment for someone who probably never thought he’d play at Anfield again, never mind score the winner in a derby.” ✊

🗣 Listen to this week’s FREE Anfield Wrap podcast, after the Reds’ 1-0 win over Everton, in full here 👉 https://t.co/wg030qfQDv pic.twitter.com/RNasampvbE