The Worrying Trend For Jordan Henderson This Season 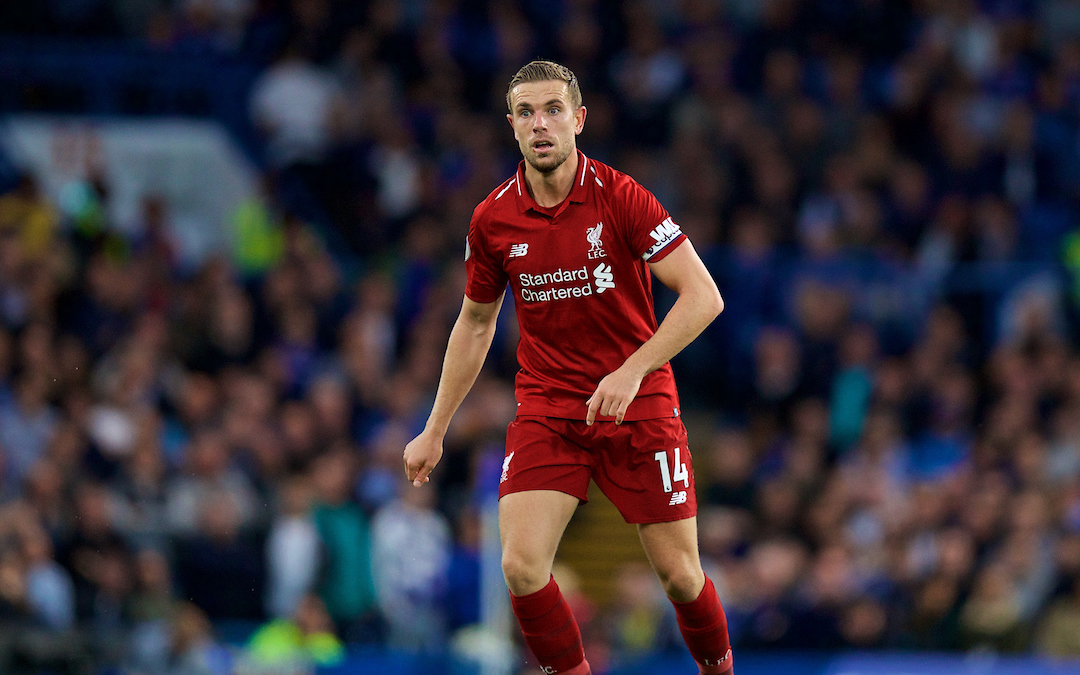 LAST night wasn’t good, was it?

Why couldn’t anyone in a red shirt pass to anyone else in a red shirt? I know Napoli’s pitch looked like it had been dug up, but still. We should have managed at least one shot on target. It’s really hard to score without them.

It rounds off a rather disappointing week or so for Liverpool. Out of the Carabao Cup, beaten in the Champions League and losing their 100 per cent record in the Premier League — albeit in a game where we rescued a decent point.

Even in a frustrating run, some players have come out with credit. Daniel Sturridge has scored twice, Alisson Becker has proved he can make big saves at big times and Joe Gomez continues to grow every game.

For others, form is starting to become a concern. It has been a particularly worrying eight days if you are Jordan Henderson.

That’s not to say Henderson is to blame specifically for any of the last three results. Blaming any one player in a team game is daft, unless it is a goalkeeper throwing the ball in the goal. (Hiya Loris, mate. Glad you are enjoying Turkey. Never come back, please.) But the facts aren’t great at all.

Again, saying Liverpool’s fortunes or otherwise are down to one player is daft. In two of those games Henderson isn’t in the first 11 and Liverpool start dreadfully. He also can’t do anything about Sturridge hitting the bar with one shot, and scoring with another.

However, if you’re the captain of a football team, the above should worry you. As a leader he should be a positive influence on the team, yet the opposite seems to be true. Given the fact that he also doesn’t start Liverpool’s biggest win of the Premier League so far (4-0 against West Ham) or their most eye catching (2-1 at Spurs), you would worry a pattern was emerging.

Is it Jordan himself or the balance of the midfield with him in it? Naby Keita hasn’t set the world alight yet, but he does offer something different, and crucially James Milner and Gini Wjinaldum seem much more sure of themselves and their roles in that three.

With Henderson in for Keita, regardless of their respective abilities, it all looks a bit samey and a little bit too safe. Wjinaldum and Henderson managed just 12 forward passes between them last night. No wonder the front three looked frustrated. They haven’t been in great form either, but you could imagine they would really benefit from someone passing the ball forward.

Crucially, the manager’s faith in Henderson seems to be wavering a bit too. While Gini and Milner have been largely ever present, it is Henderson who has been in and out. He had a much busier summer so that might be a factor, but at crucial times this season, like 1-0 down at Chelsea, there have been on-pitch lieutenants Jürgen Klopp seems to trust more.

I’m not writing Henderson off by any means. He’s got shares in The Anfield Wrap after all. But with Keita potentially unavailable and Fabinho seemingly way off the pace, we could really do with Henderson imposing himself on games sooner rather than later. In fact, definitely sooner, Jordan, to be honest.

Manchester City on Sunday. They’ve got about seven lads who play number 10, and we are really going to need him at his best.

For more reaction to the Napoli defeat, SUBSCRIBE to TAW Player…