Jürgen Klopp, Jose Mourinho And The Pressure Of Chasing Success 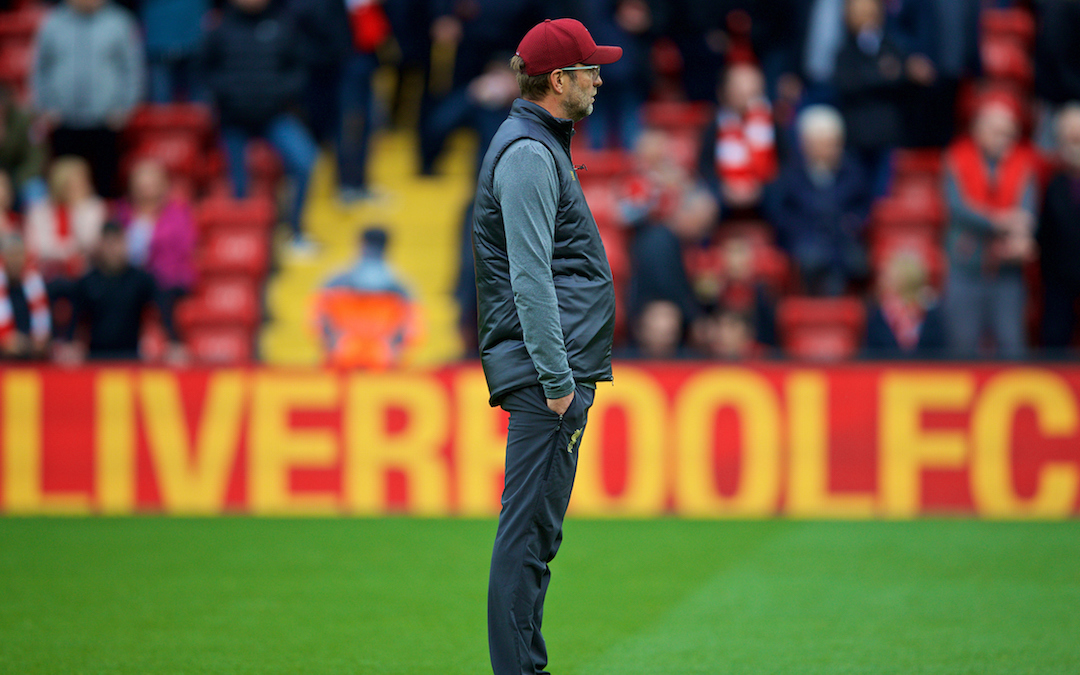 Jose Mourinho said it’s about time Jürgen Klopp lifted some silverware, Gary Neville said he believes the German may need to target the Premier League at the cost of a Champions League run, we are just waiting to hear what Paul Pogba thinks. Perhaps we can guess already.

The recurring theme down the M62, and down the M6, and all the way through the roadworks to the London media hub is “do Liverpool need to win something this season?” It’s not exactly an elephant in the Anfield trophy room but success is the currency of progress and, let’s face it, the “Five Timers” on The Kop are never shy about counting the medals.

Mourinho started it… Surprise, surprise. Conveniently ignoring his own greater net spend in two years at United, he started the season by ridiculing Klopp’s change of heart on record transfer fees and stating that Alisson Becker’s arrival behind Virgil van Dijk merely raised the pressure on Liverpool to deliver major honours. It was a badly disguised attempt to ease the pressure on himself.

Neville’s comments were more considered, more complimentary. He is not scared to admit that Liverpool appear to possess the squad best equipped to challenge Manchester City for the title. Caught between the devil and the sky blue sea, he may even privately prefer to see Liverpool on top but his reservation is the staying power of a team that plays every minute like the last. Neville was surprised to see Sadio Mane, Roberto Firmino and Mo Salah all start in Naples. There will be Liverpool fans who agree with him.

The pressing question is does Klopp now have a squad that runs deep enough to entertain rotation in such a demanding Champions League group? If Alex Oxlade-Chamberlain and Adam Lallana were both at the peak of their powers, Liverpool’s “top 20” would start to stand genuine comparison with City’s. It’s not just that they are two truly outstanding players but they both understand how Klopp’s tactical machinery works. The likes of Fabinho and Xherdan Shaqiri are still learning.

With Huddersfield, Cardiff, Fulham and Red Star Belgrade all imminent, we are probably about to find out how their education is coming along. It’s not a matter of complacency or disrespect, it’s just looking after business. One or two scars of international football may force Klopp’s hand, but it’s a hand that he surely has to show in the coming weeks in order to play the long game successfully.

You always have to face the music if the result turns against you but Liverpool didn’t go out of the Carabao Cup just because Alisson and van Dijk were sitting in the posh seats. Remember, Daniel Sturridge hit the bar a minute before Eden Hazard’s winner? That performance was OK. Chelsea put out a stronger team than some that Liverpool will face in the next month.

The bigger question is how vital is a trophy to confirming the evident progress that the squad is making? What outsiders like Mourinho don’t understand is that the desire to parade a pot through the streets of Liverpool is at its most intense inside the home dressing room at Anfield. Nobody wants it more than the people who would lift it. So the greatest pressure is coming from within, not from rivals trying to play tired mind games.

When your history is as rich and as recent as Liverpool’s, the current generation of players and fans face constant reminders of the winning traditions. Klopp openly and proudly draws on those traditions but he was a gawky teenager trying to make his way in the world in the days when Liverpool won major trophies 13 out of 15 years. The notion of this squad making its own history is the key to actually doing it.

It is worth remembering some of the names associated with Liverpool’s last three trophy wins – Charlie Adam, Stewart Downing, Jan Kromkamp, Momo Sissoko, Djimi Traore et al. You can’t really foresee any such anomalies figuring next time. The gathering belief is that the next one will lead to another, and another, and that the core of this present team will share more than one open-topped bus together before the cycle passes. Progress is measured annually. Any advance on fourth place and another long cup run will qualify for advancement if not fulfilment.

Only you can decide what you would take right now. That’s one for the Wirral Line or waiting for the number seven on Edge Lane in the morning. I can’t tell you. Those seven straight wins to start the season topped the excitement levels up nicely, but more than that they got the attention of Liverpool’s rivals.

So don’t get mad when you read or hear the noisy neighbours banging on the wall telling you what you should be doing with your season. It’s only a sign that you’ve got them worried.