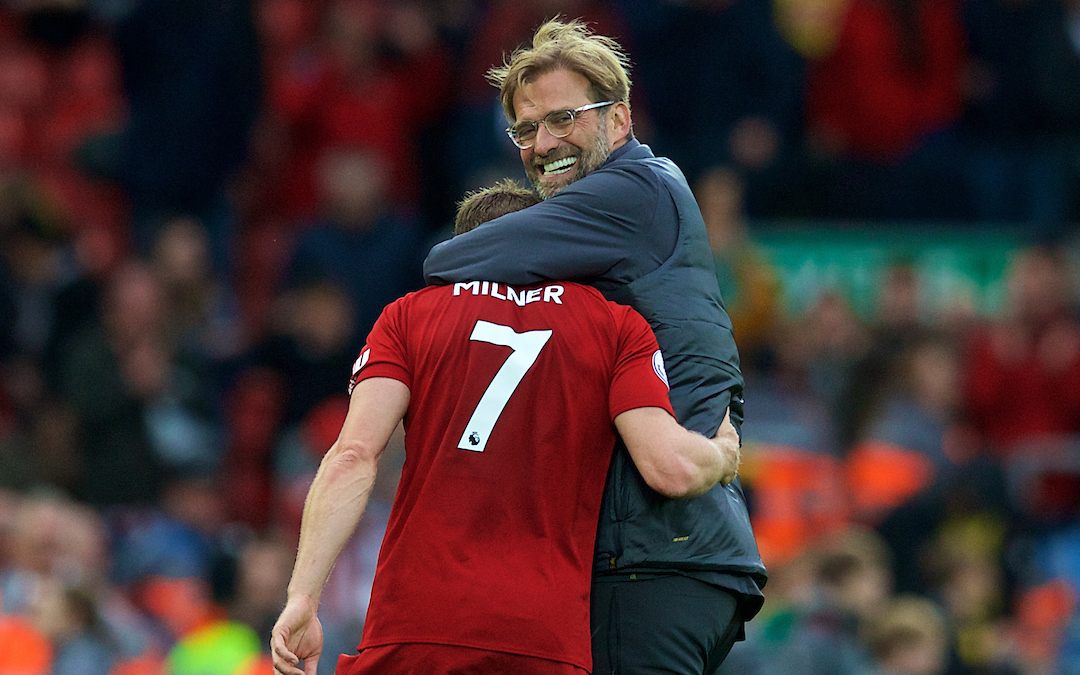 IT was raised by many heading into the season as a reason to back Liverpool to do well.

Thanks partly to the inspired movements in the transfer market and the careful management of the squad by Jürgen Klopp, all of a sudden The Reds have gone from having a starting 11 that people could easily pick holes in to having such strength in depth that fans find themselves salivating at the names on the Liverpool bench.

However, names are just names. Until they come on the pitch and contribute, they mean no more or no less than the names that sit on the opposition bench, or in the stands.

It must, therefore, be particularly pleasing to Klopp that we are only seven games into the season and, despite not really doing all that much rotating of his side, he has already reaped the benefits of having stronger options to call on when necessary, especially in the last week.

Daniel Sturridge was a surprise inclusion in the starting lineup for the Champions League opener against Paris Saint-Germain, but rose to the occasion by scoring the opener and generally putting in a good performance, while Xherdan Shaqiri and Joel Matip both popped up from the start against Southampton and more than held their own, with Shaqiri showing enough to win man of the match despite only playing the first half.

The Swiss bulldog floated between the midfield and attack, causing the first goal with his shot and taking the freekick that led to the third. Cameo appearances like that could prove incredibly useful in similar games as the season goes on, though I’m sure he’d like to come out for the second half as well every now and again.

Matip had the odd wobble against The Saints, which was understandable given it was his first start in a few months, but overall was impressive, winning several headers, making interceptions and playing quite a few aggressive balls into the front three, even galloping forward himself early on to force the crowd to double take when they saw him overtaking Mo Salah for no discernible reason. He also grabbed a goal with a superb header, beating 9ft17in (give or take) Jannik Vestergaard to the ball and guiding it into the net.

It was nice to see how pleased for him his teammates were as well, especially Virgil van Dijk, as the Cameroonian feels a little like the forgotten man. The former Schalke stopper was probably Liverpool’s best defender just two seasons ago, and we were all anxious during the bizarre saga around the African Cup of Nations when his country refused to let him play for his club even though he hadn’t been called up. He is probably now Liverpool’s fourth-choice centre back after the emergence of Joe Gomez and the improvements seen in Dejan Lovren, but there will still be games like Saturday for him and he showed that there isn’t much for people to worry about if he has to come in for a few more games in future.

Liverpool’s starting 11 has already shown that it’s up there with the best. It is that strength that has people fancying them to win more of their big games to take them close to a first title in nearly 30 years, and possibly back to the Champions League final, but it is the games in the margins when others may be needed where seasons can ultimately be defined. If the likes of Sturridge, Shaqiri and Matip can come in and there’s no noticeable drop in performance, it will make Klopp’s life infinitely easier.

Which brings us to Wednesday, and Liverpool’s third round Carabao Cup clash with Chelsea, where it is expected that Klopp will give outings to several of the fringe players he may have to call on later in the campaign. The German will probably keep people guessing up until an hour before kick off as to how many changes he will make, but players such as Simon Mignolet, Nathaniel Clyne, Alberto Moreno, Fabinho, Shaqiri and Sturridge will all be hopeful that they will at least feature, if not start in the game with The Blues.

In Mignolet’s case it really is up in the air as to whether he will indeed play again for Liverpool after failing to secure a move before Loris Karius did in the summer, which forced him to stay at Anfield despite being open in his wishes to move on. However, Klopp will be mindful that any unwelcome knock to Alisson Becker will mean needing to call on the Belgian, and he may see this as an opportunity to get him some minutes, rather than risk the possibility of a very cold and out of practice goalkeeper having to come in down the line.

If Liverpool’s fringe players are to show their best and be the useful options that their manager will crave, they’ll need to focus any frustration they might have from a lack of playing time and the hunger they have to prove that they belong in the first team into performing to a high level and showing their worth, like those who have been given chances have so far.

The ultimate dream is for the whole squad to be what the midfield has become, where Klopp currently has numerous players to take up three positions, and any combination seems more than reasonable. The performances of James Milner and Gini Wijnaldum, in particular, are exactly what you hope for when you bring in extra competition.

It has been far too long since Liverpool won a trophy, let alone the league, and so progress in the Carabao Cup will be important, but with the strength of the squad in place at Anfield there’s no reason that those who don’t play week in week out can’t make this their competition, and they’re good enough to win it.

Imagine Sturridge scoring in every round in a run to the final, or Shaqiri wowing the fans on the sort of cold nights he got used to at Stoke, or Albie Moreno scoring the winning penalty at Wembley in February before whipping his kit off and diving like a starfish into the Liverpool fans.

Klopp has stronger options than he’s had before, and there will be no one happier about that than the German.

“James Milner and Gini Wijnaldum have gone ‘you think you’re taking my place cheaply? No you’re not’.” ✊

🗣 Listen to this week’s FREE show here, as the Reds made it seven wins in a row 👉 https://t.co/5sutzzZoPN pic.twitter.com/0YKbtVcgmh