Joe Gomez: From Rookie Full-Back To The Calm At The Heart Of The Liverpool Defence 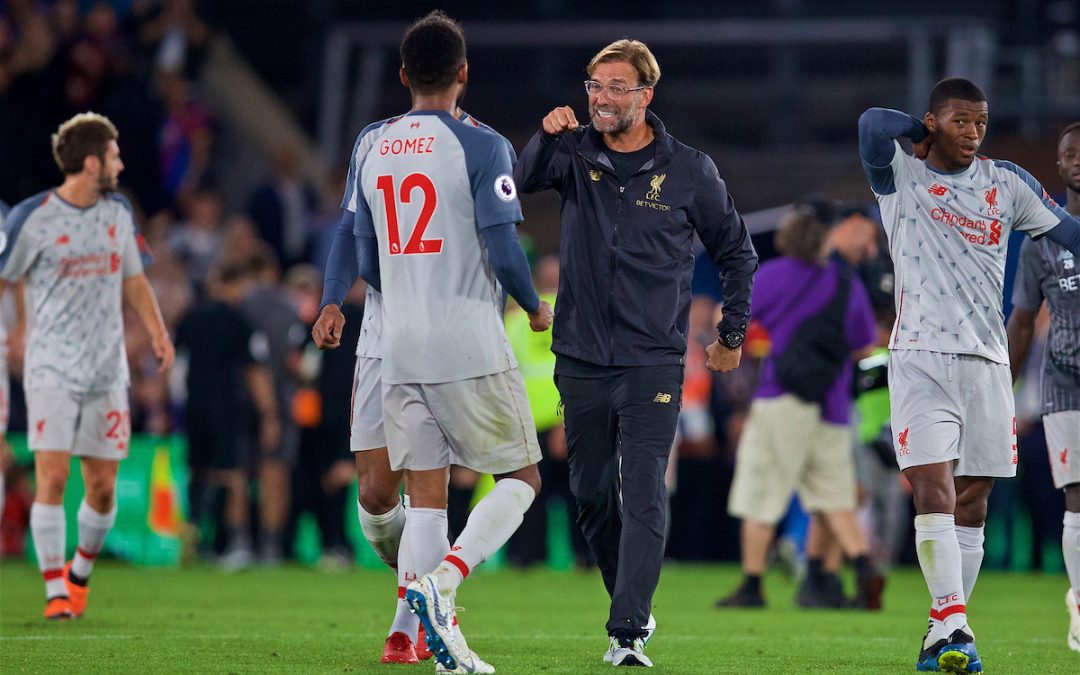 THERE are some players you just don’t worry about.

From the minute they kick a ball for the club, they project an air of calmness, of reliability in many ways. There are many examples of players down the years who have emanated such an air of placidity. Yet for every Sami Hyypia there is a Mamadou Sakho, for every Xabi Alonso a Jonjo Shelvey.

The point being that for all of those who reassure you, there are others who in equal measure terrify you with their erratic, unconsidered and ultimately flappable nature.

There are also players past and present such as Dejan Lovren, Emile Heskey and even Steven Gerrard, to an extent, who just need an arm around the shoulder and a nod of reassurance on occasion.

For me, Joe Gomez has a reassuring presence. A considered and measured approach to what is at times an arena of chaos that engulfs all of those immersed in it. In the Gary Cooper mould, he very much gives the air of the strong, silent type.

This is probably encapsulated most by the fact it is easy to often forget he is still only 21 years old. He is now also in his fourth season as a Liverpool player. A combination of injury and the elevated level of the current squad in comparison to the one he joined have seriously halted his development.

These circumstances are far from terminal yet they remain regrettable to a point. As well as the seemingly eternal youth of Gomez, it is often overlooked how excited we all were by him after his initial appearances at the beginning of the 2015-16 season.

When he arrived in a relatively low-key £3.5million deal from Charlton, all of the initial murmurings coming out of the club were that the young defender would be immediately sent on loan to further develop.

Yet his impact in pre-season had then manager Brendan Rodgers and his staff left aghast by the ability and temperament of the young defender and subsequently Gomez found himself starting the campaign as part of Liverpool’s back four, but predominantly in a very unfamiliar left-back role.

The then 18 year old glided through games, growing and learning, but more importantly not looking out of place at any real point. An away performance at Arsenal on August 24 that season was my own personal “sit up and take notice” moment with the player.

An ACL knee injury while unsurprisingly on England Under-21 duty in October that season, the same two-week interim which saw Rodgers depart the club and Jürgen Klopp arrive, put an end to what was a very promising start to Gomez’s Liverpool career.

If you recall that time, it was widely predicted that Gomez would be trusted with starting Klopp’s first game away at Tottenham at centre-back before news of the injury broke. This suggests Klopp knew of Gomez’s undoubted talent and wanted to build a side with Gomez given the opportunity to be at the core of it from the offset.

Yet Gomez had to swallow the reality of what was essentially 12 months side-lined through injury. As well as this, the acceptance that some of his rehabilitation had to come on the pitch for all to see at times wasn’t pretty. Liverpool’s fourth round FA Cup exit to Wolves in January 2017 was the lowest point of Gomez’s attempts to reintegrate himself back into the fold at Anfield.

Yet the circumstances of last season, and the player’s own desire to succeed, offered a pathway back into the first-team fold. Nathaniel Clyne’s elongated back injury meant that Gomez and Trent Alexander-Arnold would be Klopp’s options at right back for the entire campaign, and neither disappointed.

Gomez found himself back in the position he had started his Liverpool career, however there were times he clearly still lacked the explosiveness previously possessed, due to the nature of his injury setback and also a sense of excess muscle building, as Klopp had suggested.

It was clear that Gomez was still feeling his way through games and gathering sharpness as well as adapting to a role in what was a very unique team. His tendency to be caught under the ball and to knock off back post cost Liverpool at times, yet these incidents were very few and far between.

Another injury setback put paid to any dreams of involvement in the Reds’ Champions League run-in as well as any realistic World cup hopes Gomez will have had. Yet the player went on holiday this summer knowing that he was part of this team and that his pathway was a lot clearer than it had been in recent years.

A return pre-season offered the impression of a more focused and determined footballer, and maybe one armed with the knowledge his manager now sees him in his preferred position at centre-back. In addition, the injury to Dejan Lovren during his summer activities with Croatia further led to an opportunity which, so far, Gomez has seized without blinking.

What has impressed about Gomez so far this season has been his reading of the game at centre-half. He has shown that he knows how to make his life as easy as possible in this role, and that is predominantly done through positioning.

His positional awareness and ability to see two and three steps ahead has been very promising and a signal of development to his manager, teammates and us fans. There is obviously an aide of the players around him helping. Being surrounded by the likes of Alisson, Virgil van Dijk and James Milner can only serve as a positive and his improvement through each individual game.

In the same mould as Jamie Carragher in a comparative sense, it can also be argued that time spent at full-back, out of his relative comfort zone and watching and learning how to adapt to playing in the centre of this Liverpool back four has also assisted Gomez.

It can be overlooked that a big part of the evolvement of Klopp’s side this season has coincided with a decision to have actual full-backs in both of those positions. Both Milner and Gomez have filled in there in recent seasons and although both players added a degree of solidity, you felt that the shackles could never really come off in a symmetrical sense across the pitch when they were playing.

This season already feels different on many levels; none more so than because Liverpool have started the season winning games and not conceding goals. Joe Gomez is currently a fundamental part of that, and not one of us are in the slightest bit worried. Long may it continue.