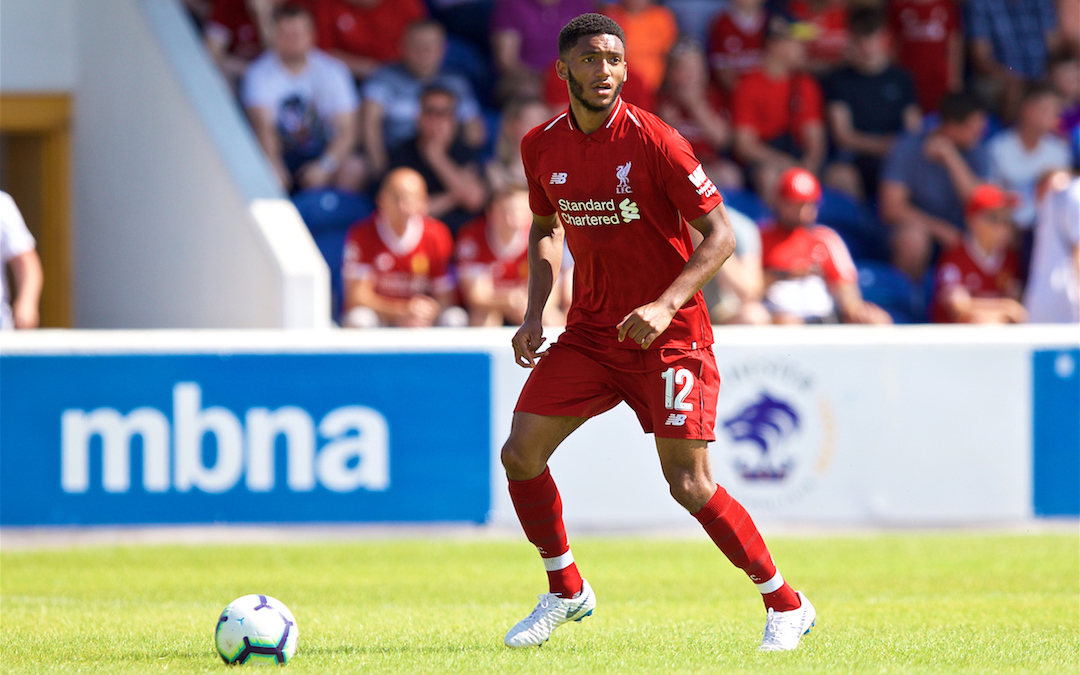 WATCHING it in the ground is hard, you know.

There’s a reason I’m starting by saying that. For one, you simultaneously feel the pressure a lot more and also a lot less.

Liverpool were under the cosh for the last 20 against Leicester City, at the very least. And yet you feel inclined to trust these lads. And yet every time The Foxes are bearing down on the box, or winning a corner, your heart is in your mouth.

But there’s another reason watching it in the ground is hard. That is because you don’t really get a second look at things. You might get replays on the key events, but it’s very rare that those key events are Joe Gomez absolutely bossing a backline that didn’t have their best day.

Last weekend, I was left with the unenviable task of having to fill in for Ben Johnson on The Anfield Wrap’s match ratings. In that, Joe Gomez *might* have been given a 6/10 rating for a performance which warranted much more — apologies to those whose time I wasted having to comment their disgust.

The perils of watching in the ground and passing comment immediately after.

Luckily, Gomez carried that form into the win over Leicester. In fact, he raised the stakes — going all in with a block which almost kept our hopes of never conceding a goal ever again alive.

It felt as though every time the ball came near Gomez he was ready to deal with the danger and relieve the pressure. Leicester kept it varied with balls over the top, in behind, out wide and through the centre, but Gomez was always right in the thick of it to sweep up.

Trent Alexander-Arnold and Virgil van Dijk don’t have their best games. Trent looks like a player who is coming off the back of a wave’s crest and is trying to find his feet in a normal football environment. Virgil has a mad 20 minutes but finds his head (quite literally) before it cost The Reds.

But alongside them, Gomez stood head and shoulders above anybody on the pitch.

The 21-year-old has had his fair share of setbacks during his time at Liverpool.

He was immediately thrown into first-team duties in the unfamiliar role of left back, and dealt with it in the best possible fashion. He’s sustained two big injuries in a row and shown professionalism way beyond his years to bounce back. He even lost his place to Trent heading into the crucial stage of last season, again injury preventing him pushing on.

And yet here he is, in his natural position and he’s calming everything down in a game where Leicester are trying to be the bull to the Liverpool defence’s china shop.

With Dejan Lovren still to come back, and the post-international break games looking daunting/exciting (depending which way you view a glass at 50 per cent of its volume), Gomez may have made a position he’s barely been given a chance in his own.

So here’s to you, Joe Gomez. Forever bouncing back. Forever maintaining red momentum.