Liverpool’s Squad Depth: Finding The Balance Between Rotation And Momentum 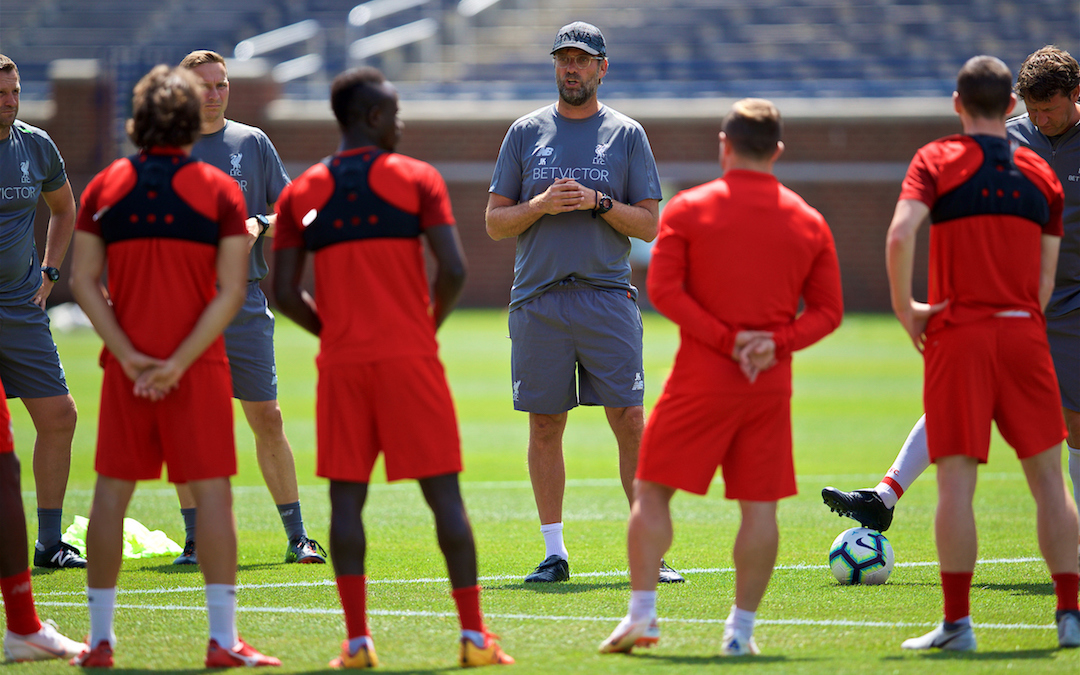 A LOT can be said about the length of a campaign and a manager’s urge for momentum.

However, with games coming thick and fast on the back of the World Cup, the need for rotation is as important as it’s ever been.

In the past, rotation has often led to a dip in momentum, as it’s usually teamed with a dip in quality.

But the times they are a-changin’.

The quality throughout this squad is at its strongest since the treble-winning season in 2001. Just look at previous starting 11s under Roy Hodgson, Brendan Rodgers and even Rafa Benitez. When competing in cup competitions, we often saw a much-weakened side which rarely came up with the goods. Getting knocked out to Burnley in the third round of the FA Cup via a Djimi Traore own goal in 2005, alongside subsequent defeats to Barnsley in 2008 and Reading the year after, are all prime examples.

Although the sides looked strong enough on paper to get the job done, there wasn’t a Plan B; no potential game changer who could come off the bench and make an impact. Those kind of defeats prompted the Daily Mail to pose the headline “Liverpool have suffered more FA Cup giant killings than any other Premier League side” in 2017. It’s something that clearly needed to change.

Fast forward; it’s 2018 and Liverpool don’t have to worry about Nabil El Zhar starting in midfield, or David Ngog spearheading our attack. Liverpool now have the pleasure of fielding a second-string side that is miles better than the strongest reserve 11s from previous years.

We could have a player in Daniel Sturridge who scores on average one in two for us when starting, while the PFA Player of the Year Mo Salah sits on the bench. We can afford to leave Premier League title winner James Milner on the bench, safe in the knowledge that England international Adam Lallana starts in his place. This is a squad that can compete on all fronts this season, there’s no denying that.

We could see an exciting 11 fielded in almost every game this season. Whether it’s in the third round against Wycombe or a Champions League semi final against Real Madrid, it’s something we can all enjoy. Love him or loathe him, Xherdan Shaqiri will bring excitement to the pitch, whether he’s attempting overheads from 25 yards or chasing defenders down, he’ll be exhilarating to watch.

There shouldn’t be any worries about a dip in momentum. Yes, the momentum going into the Champions League final helped, but we ran out of steam at the final hurdle. This squad is now good enough to win games without the so-called strongest 11 on the pitch. Also, given Jürgen Klopp doesn’t even seem to know his strongest side, how the fuck are the opposition going to know?

The momentum in the 2001 treble-winning season wasn’t hindered by rotation and it hard to see it being a problem this time around. That’s not to say we’re going to win three trophies, but it’s not crazy to think we could. Klopp has waited for the right players to become available and it feels like it’s finally about to click, like these lads are all going to hit fifth gear when the time is right.

Liverpool do need to maintain this early momentum, just look at Manchester City last season. If Raheem Sterling doesn’t net that last minute winner away at Bournemouth in late August then it’s likely City don’t go on such a run. The recent hard-fought wins against Brighton and Crystal Palace are the kind of games we would draw or lose in years gone by, the momentum being built is crucial.

Although Klopp has chosen not to rotate thus far, it’s clear he is using an 11 made up of the players who he knows he can rely on to get 12 points out of 12 before the international break — after which the majority of the lads will be firing closer to 100 per cent when they return.

Winning a cup would bring smiles to everybody’s faces — regardless of its abject sponsor — and we have the squad to do just that. And Klopp now knows what it takes to compete on several fronts; striking a balance between squad rotation, squad depth and momentum.

The manager has shown he is learning lessons from his first few seasons in England, making more changes than any other Premier League boss last season — before a lack of depth did for us in Kyiv.

This year, there’s no doubt he will continue that progression and hopefully take us a step further.