Notice: unserialize(): Error at offset 32818 of 47050 bytes in /efs/wp-content/themes/Divi_backup-/core/components/cache/File.php on line 79 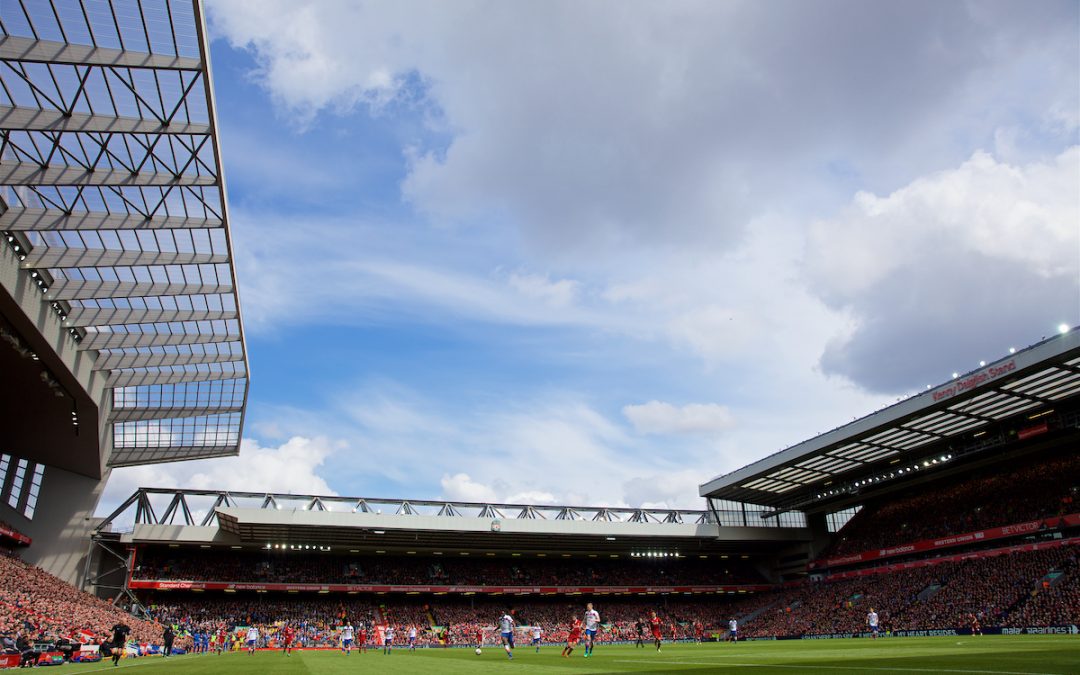 IT’S around this time of year that Liverpool Football Club “members” have to endure hours of queues and early mornings filled with inconvenience to try and buy tickets to go and watch The Reds play.

In the act of trying to pay the club a lot of money to go and form the backdrop that will be used to market the “experience” of watching a game at Anfield, loyal supporters are running into issues which, in some cases, may cause them to have to fork out more money or even miss out altogether.

That’s after paying between £26.99-£44.99 to purchase an adult membership, to just be given the opportunity to buy tickets – or as the club website says: “access to members’ allocation of a minimum of 10,000 tickets for each Premier League home game in the two members’ ticket sales in July and November.”

Assuming supporters have purchased a membership before the deadline set by the club, after which supporters wouldn’t be eligible to purchase tickets in the July sale, they are then presented with information about three opportunities to buy within that particular sale.

The first of those was held on Tuesday, July 17, and was specifically for members who have attended 13-plus home games throughout the 2017-18 season. That included the West Ham, Brighton & Hove Albion, Southampton, Manchester City, Everton, Manchester United, Newcastle United and Arsenal games during the first half of the season.

The second sale took place on the following day — Wednesday, July 18 — and was specifically for supporters who had attended four-plus home games throughout last season. That included the fixtures against Manchester City, Everton, Manchester United and Arsenal.

The final round of these sales was scheduled to take place today — Thursday, July 19 — and was a sale for all members who wished to buy tickets for the West Ham, Brighton, Southampton, Cardiff City, Fulham and Newcastle games.

We recently covered the topic of the club’s relationship with its members on our weekly FREE show, if you like it why not SUBSCRIBE to TAW Player?

The first issue obvious lies within the sales for the Cardiff and Fulham games, which are only open at one time and are available to everybody, regardless of previous attendance. It could be argued that is designed to give everybody a fair chance of attending at least these games — an opportunity they may not get with the other games. That means members who want to attend every home game, and have done so for many years, may lose out — and they will argue that their loyalty should be rewarded.

Neither of those things are technically incorrect and therein lies the problem for the club. You can’t please everybody and despite the expansion of the Main Stand, demand still far outweighs supply. With expansion of the Anfield Road not yet forthcoming, the club must find fixes to the issues supporters keep having year after year.

The latest of those came today as the website crashed unexpectedly, leaving many who had either already been queueing or were in the process of doing so disappointed. The club have since released a statement apologising and explaining what caused the issues, but what do they plan to do in order to improve the experience for supporters in future?

We spoke to Liverpool FC members and Anfield Wrap contributors Dan Austin and Neil Docking about their experiences, as well as Spirit Of Shankly chairman Jay McKenna about what he thinks could be done differently.

“The vendor, Advanced, has confirmed that their servers experienced an extremely high volume of rogue traffic and the system had over one million hits per second when the sale started. That caused the vendor’s ticket system to activate its in-built security processes to ensure genuine members were safeguarded.

“We will now work with the vendor on a full root and branch investigation to fully understand the issue and what can be done in future to avoid it.

“We sincerely apologise for the difficulties members encountered accessing the ticket sales system this morning.”

“It’s never a good sign when something as simple as selling tickets becomes a news story. That it is now an annual event is even worse.

“It’s clear that it isn’t working but I don’t think it is as simple as fixing just one thing. There are lots of frustrations and the best thing that could happen is the club to explain why they sell tickets the way they do — some sales based on loyalty, others a free for all. We can guess it is because they want more people to have a chance, and given how many memberships they sell people will want a chance to buy. But they should be honest about that.

“What can the club do practically? Outside of the obvious ‘build a bigger ground’ then maybe there are some things they can do. Limit who gets into the system to just those eligible to apply. Have a system that can cater for ‘unprecedented’ demand. More tickets available? Some will want it based on loyalty?

“I think we need to review what is happening. Importantly listen and talk to fans about it. Twitter is currently people asking Spirit Of Shankly what is happening. The club should have an account on there that is interactive and listening to these concerns. The mentions for SOS or even Tony Barrett show that there’s lots of people who want the club to listen.”

“It’s important to acknowledge that Liverpool FC has made great improvements to its ticketing protocol in recent years. Sales to local members and non members with L postcodes have ensured that more Liverpool-based people have access to match tickets (and in the case of the general sale, at a vastly reduced price of £9), while the availability of young adult tickets, coupled with the designated adult and child area in the upper Anfield Road end, means young people get a much fairer deal than previously.

“I’m also fortunate personally in that, this year, I’ve been able to pick up all of the tickets I wanted, which was not the case in seasons gone by. But major problems remain with the process of actually purchasing tickets. First and foremost, the website seems to inexplicably crash during the July sale on an annual basis.

“Many suggestions have been made to the club over the years in regards to making the members’ sale easier and less strenuous for everybody, which have not yet been taken on board, so here they are again:

“In theory at least, when first introduced, the summer/autumn official members’ sales would be a big improvement on the old system of having to buy tickets every three or four weeks, for each individual game. Aside from the fact you probably needed a credit card to buy eight or nine games in one go, it seemed like this new arrangement would save fans a lot of hassle.

“The opposite has been true. Twice a year thousands of official members are now forced to take time off work (or hope they can get away with being late) in order to wait for hours on end to try and give the club hundreds of pounds, which many of us can barely afford to start with.

“Every year, after promises of ‘improvements’, the website crashes or people are kicked out of the site, just as they are about to pay. The club then issue hollow apologies for not being able to cope with ‘unprecedented incoming traffic’, despite the fact they surely must know this is going to happen – unless they have no idea how many official members there are – because it always fails.

“One possible solution, long suggested but repeatedly ignored, could be further staggering of sales.
People like me, effectively second-class season-ticket holders who go to nearly all home games, could be part of an initial sale, requiring say 17-plus credits. Then sales for 13-plus, nine-plus, four-plus and so on could take place, to ease the pressure on the website and reward loyalty.

“Yes, that might require the sales being held over two weeks rather than one, but if the club doesn’t think this is feasible it should explain why.

“The last thing any of us want to hear is another worthless apology for a problem Liverpool Football Club has failed to solve for over a decade.”