Jürgen Klopp’s 2015 Title Promise: Could This Be The Year? 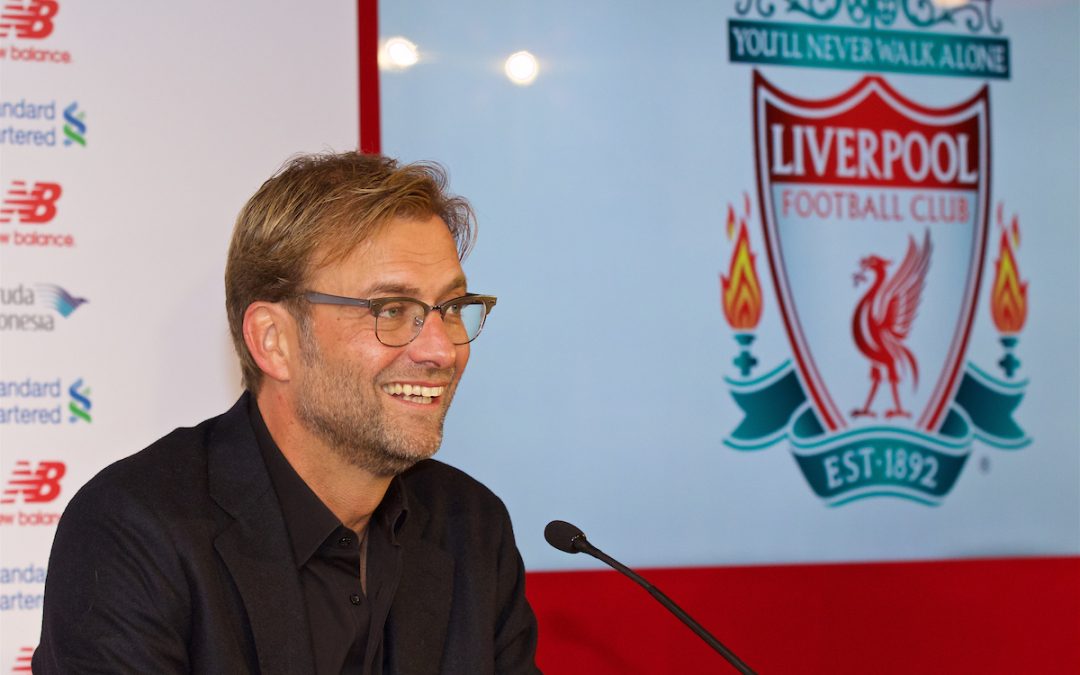 IT feels like a good time to be a Liverpool supporter.

The club have established themselves as serious players in the transfer market, are showing a growing appreciation of Liverpool fan culture and the team remain one of the Premier League’s most entertaining sides to watch.

Jürgen Klopp has played a strong part in all of those coming to fruition — aided by other key figures at the club.

It is, after all, Klopp’s project the new recruits are buying into. As he said in his first press conference in October 2015: “It’s enough for me to have the first and last word. We only want to discuss really good players. I’m not a genius, I don’t know more than the rest of the world. I need the other people to get perfect information.” He clearly trusts Michael Edwards and co to find the right players, and that trust has paid dividends so far.

In the same unveiling, Klopp said supporters who want to help the team would have to change from “doubter to believer”, but for that to happen supporters had to feel appreciated once again — and not feel like they were “customers” being taken for a ride.

It’s taken a while. There have been dark times, like the walkout back in February 2016. There is work still to be done, as the recent members’ sale shambles showed. However, on the whole, positive steps are being made.

In terms of the football, it’s exactly what was expected when Klopp first walked through the door. High octane, exhilarating, broadly attacking football. The impact was immediate, the players running themselves into the ground in his first game against Tottenham Hotspur the clearest evidence of that. However, it has taken a while for him to find the right formula, particularly in terms of quality of player and squad depth. The right balance is as close as ever to being struck.

His signings and the qualities those players possess feels particularly poignant. For some time, Klopp has been edging towards building a team in his image. That’s more than throwing together players that suit his style of football, the personal qualities seem to be just as important. The manager is a positive influence and a strong character, and his players are of a similar nature.

Throughout the Champions League run last year, the players demonstrated their appreciation of the supporters in several different ways, culminating in the scenes after the semi final second leg in Rome — where they all gathered in front of a packed away end, dancing and singing along to the songs of 5,000 travelling Reds.

They wanted to give back to the supporters. Jordan Henderson ensuring the squad showed their support for Sean Cox on the same night, Alex Oxlade-Chamberlain giving his shirt to a young fan after the quarter final second leg in Manchester and, earlier in the year, Andy Robertson giving his shirt to a young lad who had donated his pocket money to Fans Supporting Foodbanks.

What stands out in this Liverpool side is that there are a collection of players who could be classed as underdogs, in terms of how their careers have panned out. In many ways, those players may appreciate the support they receive even more. The players giving back takes away the feeling of recognition being the one-way street it often seemed in the past — from a supporter point of view.

The success needs to follow, that goes without saying. A Champions League final last season was a taster of what life is like at Europe’s top table — having sat on the sidelines for too many years prior. The belief around the club suggests it won’t be a one off either.

For the first time since the great sides under Rafa Benitez, Liverpool have got the spine of a team worthy of mixing it with the world’s best. The signings of Naby Keita, Fabinho and Alisson Becker have added to the foundations of Virgil van Dijk, a constantly improving Dejan Lovren and Roberto Firmino.

Yet in the wide positions The Reds look even stronger than Rafa’s sides, with Trent Alexander-Arnold already making his presence felt at 19 years old, Robertson the embodiment of consistency and graft on the left-hand side of defence, and Sadio Mane and Mo Salah each offering their own explosive brand of attacking quality in differing wide forward roles.

If solid spines win titles, Liverpool have that and then some. The squad depth will still concern some supporters but positive steps are being made on that front too, and with a bit more luck where injuries are concerned the picture will look even brighter for the season ahead.

The mood at Liverpool is one of a club who have achieved so much, yet the last few months and years under Klopp would be best summarised as progress, at least on the football side.

Liverpool’s future feels bright under Klopp. He has brought back the good times and built a squad capable of challenging at the top end.

He’ll celebrate his third year as Liverpool manager in three months’ time. “If we sit here in four years I think we win a title, I’m pretty sure,” he said on his first day.

For more coverage live from Liverpool’s pre-season tour of the USA, including exclusive interviews with Andy Robertson and Jürgen Klopp, subscribe to TAW Player…

“Burnley away last season was MY game. Ragnar Klavan… shit, that was great!” 😂

🗣 Subscribe and listen to our exclusive, 30-minute interview with Jurgen Klopp 👉 https://t.co/lmNtBz4ADz pic.twitter.com/7AXRJuyzm0