How Adam Lallana Can Revive His Liverpool Career 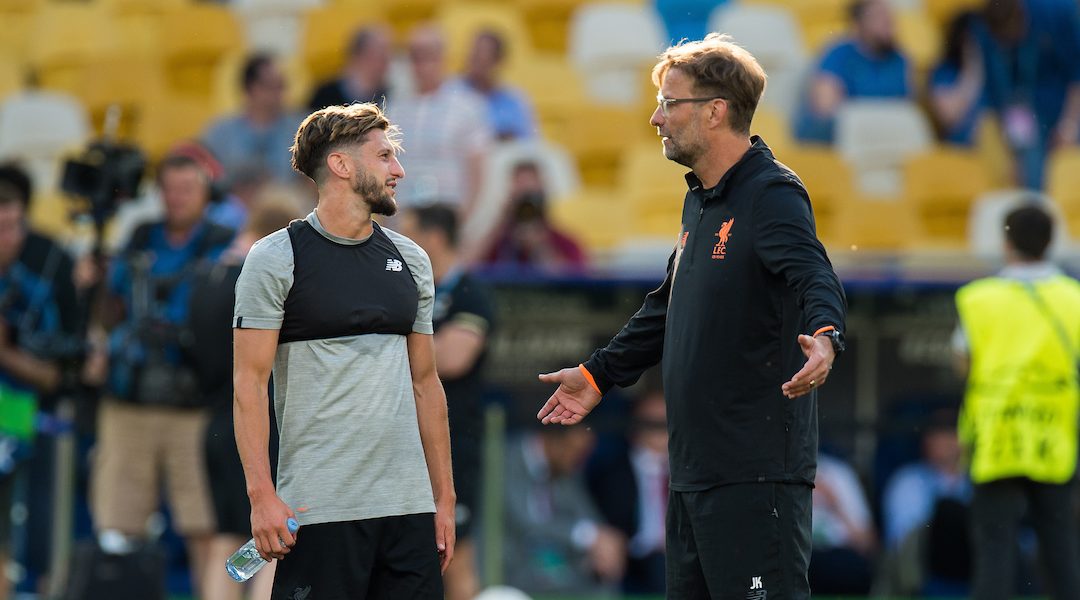 During part one of The Anfield Wrap’s Transfer Committee shows, an idea presented itself that seems to be brewing recently in at least a portion of the supporter base and Liverpool media. The notion that Adam Lallana is no longer a player we need or can depend on.

While I’m surprised by how quickly this belief has spread and become accepted (and obviously not by all fans, it must be said), I can understand how the notion has come about, to some extent. Lallana has of course been sidelined for most of the past campaign, ruled out first with a thigh injury in August, followed by what seemed like interminable setbacks during the latter stages of the season.

Even his biggest fans would also be forced to admit that his appearance in the Champions League final was thoroughly underwhelming. And if all that wasn’t enough, he has just passed perhaps the biggest age milestone in any player’s career — the dreaded 30th birthday.

However, accepting all that, I’m left wondering if our most recent memories and impressions of the player are clouding us to his past, and potentially future, contributions.

It’s no secret that, until this injury-ravaged campaign at least, Jürgen Klopp has been a huge admirer of Lallana and has seen him as a vital cog in his relentless machine. We all remember the image from Klopp’s very first game in charge of the attacking midfielder collapsing into his manager’s arms, having run himself into the ground against a very good Spurs side.

Over that campaign and the one that followed, the England international, perhaps more than anyone else at the club, became an emblem for Klopp’s devotion to brutally hard running (Lallana frequently covered more than 12, sometimes 13 kilometres per game) and a trigger for the ferocious counter pressing closely associated with the German’s style of football.

But the man signed by Brendan Rodgers in 2014 hasn’t simply been some willingly obedient workhorse either — a move deeper into midfield after Sadio Mane’s arrival in summer 2016 seemed to liberate the former Southampton captain. Luxuriating in the space afforded by the front three creating havoc ahead of him, he chipped in with eight league goals in 2016-17, second only in his Premier League career to the nine he hit with the Saints in 2013-14, when he was voted onto the PFA Team of the Year.

As churlish as it sounds after such a thrilling season and sensational performance from our front three, one of the issues Liverpool would now hope to address in retaining or improving the attacking level is a lack of goals from midfield. In this context, someone who, when fit, can score eight goals and provide seven assists from this area of the pitch should still be seen as a huge asset to the squad.

Looking at the numbers, his 2016-17 end product (the last season we can truly judge him on) totally outperforms anything from our other midfielders over the past year in the league. Jordan Henderson and Gini Wijnaldum both scored just once, the former getting one assist and the latter grabbing two. James Milner failed to score but got three assists. Emre Can and Alex Oxlade-Chamberlain scored three goals each, with the departing German notching five assists and the former Arsenal man getting seven.

Of course, those questioning Lallana’s place in the squad going forward aren’t necessarily denying his class, more his recent injury problems and age. However, there’s mitigation for that too. While the England international barely featured this season, this is hardly the norm for his career. He made only 13 appearances in all competitions for The Reds in 2017-18, but previously he had never played less than 30 games in a campaign since breaking into Southampton’s first team 10 years ago. This past year is a complete aberration in the context of his career — hardly the perma crock some are now making him out to be.

Worries may linger that Lallana might not return the same player after so much time out, he’s never been a player who relies on pace; counting game intelligence, vision and technique as far greater assets in making him the player that he is.

While some may (not unfairly) point to his lack of impact in Kyiv, the player was at least partly unlucky to find himself in such a situation, with a lack of minutes in his legs, playing in a front three for almost the first time since Rodgers’ reign, and filling the massive shoes of one of Europe’s greatest players.

Yes, he was far from his best, but it wasn’t a game to assess the player properly. Those of us with a more glass half full view of the situation could instead point to the Brighton game two weeks earlier, where Lallana appeared from the bench, looked back to his old self and helped set up Andy Robertson’s goal with a wonderful turn and pass.

As for the concerns about his age, it can again be pointed out that pace and physical explosiveness aren’t core tenets of his game. But there’s also the idea of “miles on the clock”. Lallana has played just over 400 first-team games (and only half of these at the top level) in his career, having just turned 30 in May. It’s understandable some will point out an example like Wayne Rooney, whose games dropped off a cliff after hitting that age milestone, but he, for example, had already played over 600 games by the time he entered his fourth decade.

Again, if you want to use examples more optimistically, our own James Milner had played even more games than Rooney by that age, and few would argue he wasn’t still a vital part of our squad this past season at 32.

Football, of course, moves quickly and it’s natural and understandable that much of the fanbase and media only want to look at what’s fresh in our minds — thrilling new heroes; shiny new arrivals full of potential. He’s Woody when Andy got Buzz Lightyear. A former Mr Reliable in danger of being quickly forgotten. But sometimes the older, slightly more scuffed toys end up being the ones that stay with us the longest.

Before a long dose of bad luck, Lallana contributed fully to our return to the Champions League. He may have been largely absent as the team took that opportunity and ran all the way with it, but with a full pre season in his legs and a point to prove, he has surely earned the opportunity to help cement Liverpool’s place in Europe’s elite.

For regular transfer rumour shows throughout the summer, as well as special podcasts around The Reds’ signings, SUBSCRIBE to TAW Player…

“Somebody said ‘think of Shaqiri as like when Rafa signed Benayoun’… if it is that, then I like it.” 🇨🇭