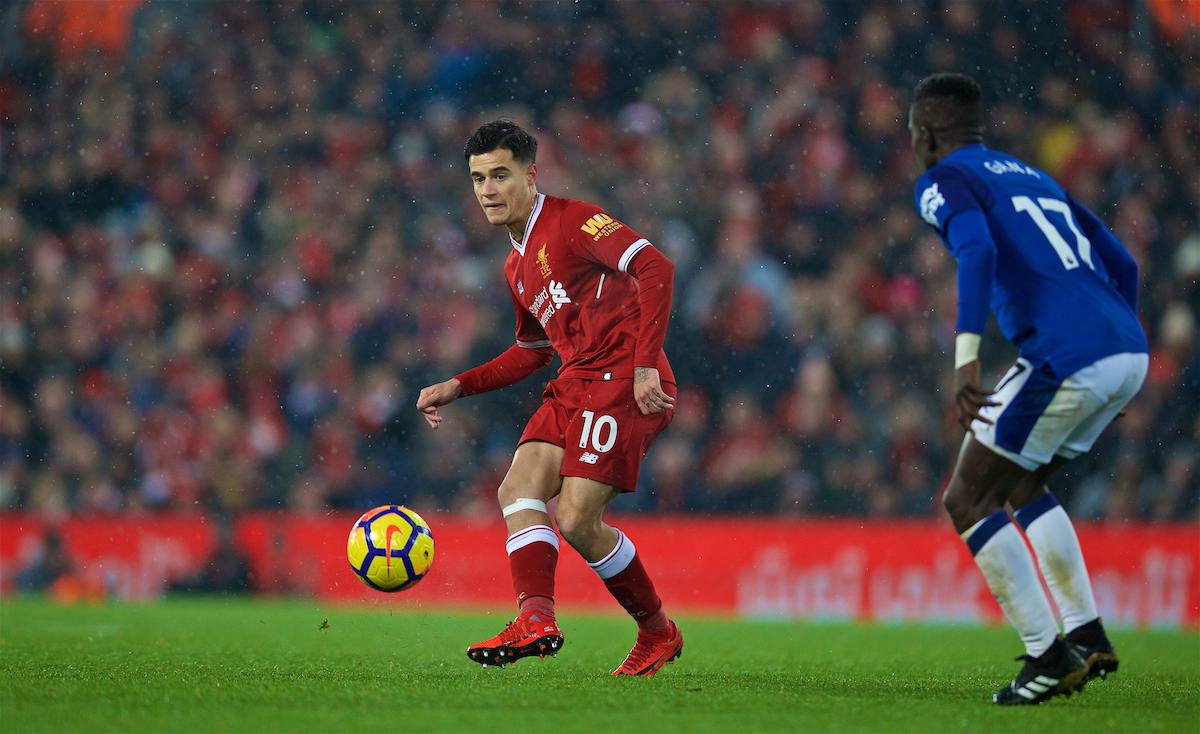 WE should only be looking on the bright side.

Four wins in five Christmas period games, 15 goals for, just five against. Mo Salah scoring, having fun, Virgil van Dijk signing for £75million. Then very suddenly it all gets a bit murky. From the togetherness in victory and ecstasy at Burnley on New Year’s Day, to the uncertainty and boiling up of old tensions as news broke that Phil Coutinho was intent on jumping ship again.

Phil’s lack of loyalty is infectious. The negativity that surrounds his future and connection to Liverpool FC is a toxicity that can go viral if unchecked. When all buy in, we are stronger. Jürgen Klopp’s clarion call from his inauguration as manager was for one-club mentality. It seemed an obvious request, but it was only when hearing his invoking of the need for unity so unreservedly that we were able to take a step back and be objective on ourselves. The wounded Kop kids of the dysfunctional Tom Hicks and George Gillett era had been so damaged by experience that they’d forgotten how to yield, to show faith.

Where once we characterised our support by its loyalty, it’s adoration, commitment, post Hicks and Gillet we saw vigilance, cynicism and mistrust as our watchwords. The cracks are papered over in victory, but in adversity, old wounds gape as if fresh.

Already the wires across the Liverpool spectrum are hot with dissent. Coutinho is the fissure, but the cut is deeper than the surface injury. The club is showing a lack of ambition. Klopp its cap-doffing accomplice. Liverpool will never compete. Big signings are just sops to placate the villagers ahead of sales.

Where the van Dijk signing united us, the Coutinho saga divides us. The omnipresent, hapless elephants in the room are the ownership. Supporters believe in their club but also can’t settle on faith only in its abstract form. They need to trust in an earthly father. The modern Red never knew his or hers. The modern fan is asked to take to owners like home-wrecked kids are to step parents. They rationally understand the benefits of working towards a new allegiance but emotionally can rarely get past resentment. They didn’t choose this guardian.

In times of stress, as Coutinho is inducing, all of these kinds of suppressed frustrations and anger return to the fore. Klopp’s desire for complete togetherness seem a vain and distant utopia.

That all this is occurring in a derby week makes it hurt just a little bit more. We’re having to work out serious family issues not just in public but right under the noses of the neighbours. Not for the first time, the timing of a derby doesn’t feel quite right.

Klopp will feel he owes Everton one after the travesty of The Blues smash-and-grab equaliser in the early December encounter. The Liverpool manager will also welcome the distraction of the real thing in the midst of a transfer window that, although still in its infancy, feels like it could become all consuming.

Coutinho won’t feature in this derby. He may never feature in a Merseyside derby again. Salah and Sadio Mane will arrive back on Merseyside just hours from kick off having been given permission to attend the African Footballer of the Year awards in Ghana. Salah is reportedly still nursing a tight hamstring and will likely be rested. Sadio should start though. He has been something of a shadow of himself of late but may relish being given top billing in Salah’s absence.

Liverpool’s front four may be Coutinho and Salah light on Friday evening but a combination of Adam Lallana, Alex Oxlade-Chamberlain, Mane and Roberto Firmino has more than enough potency to see The Reds progress to the FA Cup’s fourth round.

For once though all Anfield eyes will not be on the star quality at the top end of the pitch. There’s a chance that £75m defender van Dijk will make his first bow in Liverpool red and it’s a prospect to savour.

There will be pressure on van Dijk to impress and suppress Everton should he make his debut, but he has the character to rise to the occasion. It is rare to be truly excited about a defensive debut but Virgil is no ordinary defender. In his pomp at Southampton he was their everything — best defender, leader, playmaker.

Van Dijk’s first central defensive partner’s identity will be of interest. Ragnar Klavan and Dejan Lovren will feel they have the strongest claims but Joel Matip is Klopp’s man and will be quietly confident that he’ll get first dibs.

It’s something of a relief to have a break from the intensity of the league programme and the insanity of the transfer window. Here’s to a looser-limbed Liverpool taking frustrations out on Everton and restoring red hegemony over Merseyside.

SUBSCRIBE to TAW Player for extensive buildup to the Merseyside derby, and reaction in the immediate aftermath, as well as discussion around, and reaction to, any potential January incomings and outgoings.