Liverpool’s 10 Best Bastards And Their Moments Of Madness

MONDAY night at the King Power underlined the current Liverpool team’s plight as they were deservedly dispatched 3-1 by a Leicester City side galvanised by the sacking of Claudio Ranieri, writes JOE HAGAN-DUCKERS.

Within the first five minutes it didn’t take an expert to recognise what this current Liverpool team are bereft of: bastards. The players were emblematic of softness and are in dire need of crafty gamesmanship in order to win games like that, and make a sustained push for that elusive 19th league title.

With Chelsea looking uncatchable at the top of the league, and looking like a side that possess all the qualities we desire from Jürgen Klopp’s side, here are 10 of the best bastards we have had the pleasure of seeing down the years with their most contentious highlights.

Born one road away from Anfield, Smith was an integral figure at the heart of the defence in the great Bill Shankly and Bob Paisley teams.

A hard man with a sledgehammer tackle, Smith was the master of intimidation, notoriously refusing to take any grief from rival strikers having been known to utter the words “do that again and I’ll break your legs.”

Despite his reputation, Smith’s most contentious moment involved a water bottle in a European Cup Winners’ Cup game against Hungarian team Ferencvaros in the 1974-75 season. The centre-back fell to the floor after being struck by a water bottle launched from the crowd and he was subsequently hit with a suspension by UEFA for ‘play acting’.

Case by name, hard case by nature. Case was the epitome of a tough tackler in the 1970s for Liverpool.

The local lad is detested by Everton fans for a tackle on Geoff Nulty in the 1980 Merseyside derby. Case prematurely ended Nulty’s footballing career with the tackle, stimulating abhorrence from the Goodison faithful. In his autobiography, Case alludes to the tackle, dismissing it as a mere clash of knees, in which his knee was stronger. Nulty, devastated by the demise of his injury ridden career, employed solicitors who issued a writ to Case.

The former Liverpool midfielder states he still has no regrets over the tackle and thrived off the stick from the Everton fans subjected towards him after the tackle.

Souness is emblematic of the domineering Liverpool team’s grandeur, stoicism and consistency under Paisley and Joe Fagan. The midfield general achieved success and stardom at Liverpool winning five Leagues, four League Cups and three European Cups during his seven-year stint at Anfield.

In his last year with the Reds, after reaching the semi-final of the European Cup, the Reds faced Romanian champions Dinamo Bucharest. The first leg at Anfield will never be remembered for the result as a Sammy Lee goal secured a 1-0 win. Instead, controversy transpired when Souness appeared to punch Dinamo’s Lica Movila in an off the ball incident, consequently breaking the Romanian’s jaw.

Nonetheless Souness oozed composure and class as he put in a man of the match performance in the second leg in Bucharest, in front of a raucous reception scolding the Scot following the incident.

A soldier in his early years during the Bush War, Grobbelaar matured into one of Liverpool’s best and probably maddest goalkeepers. The inventor of the successful ‘spaghetti legs’ technique during the successful 1984 European Cup final penalty shoot-out, the Zimbabwean was no stranger to altercations with fellow team-mates.

The first happened in 1987 at Royal St Andrews golf course after a friendly against Dundee. Steve McMahon had been separated from an argument by the goalie before turning his wrath onto Grobbelaar and was consequently head-butted. The Scouser was also later smacked on the nose after walking into Grobbelaar’s room in the early hours of the morning.

Likewise, Steve McManaman came to blows with the goalkeeper following a poor clearance that led to an Everton goal in 1993, infuriating Grobbelaar into throttling the young Scouser who eventually retreated — which most would have thought was the right decision!

In today’s game, £2.5 million would certainly not buy you a lot. However back in 1993, Souness broke the transfer record for a defender when they acquired Ruddock from Spurs for £2.5m.

After two appearances in a Liverpool shirt, Razor immediately surrounded himself in controversy during Ronnie Whelan’s testimonial against Newcastle United. Two minutes into the game former Kop hero Peter Beardsley, playing for the Magpies that day, had his cheekbone fractured in three places after a clash Ruddock. The injured Geordie castigated the Cockney for his challenge, insisting he was attempting to secure ‘hard man’ status at Anfield. Razor replied in a typically blunt manner, stating he did Beardsley a favour by rearranging his face.

Like Beardsley, Andy Cole felt the full force of the centre-back’s power in a reserve game during 1996 at Anfield. The Manchester United striker was refused an apology after he left the pitch with two broken legs as a result of a strong tackle by Ruddock who later claimed it was caused by “the way he fell over.”

In the same year, contrary to his ‘hard man’ image, the tough tackler cried during training after being injured, ruling him out of the 1996 FA Cup final. As a result, he left Anfield with only a League Cup winner’s medal to his name.

A local lad, brought up as an Evertonian, Carragher would become one of Liverpool’s finest defenders and their second all-time appearance maker. A classic defender that loved a challenge, Carra was used in several positions particularly during the Gerard Houllier Era in which he featured all across the back four — even enjoying some success as a left-back.

In an FA Cup tie at Highbury during the 2001-2 season, just minutes after the sending off of Dennis Bergkamp, one of the Arsenal faithful hurled a coin at Carra. Incensed by the fan’s impudence the one-club man picked up the coin and threw it back, which propelled him into the headlines for all the wrong reasons, resulting in a £40,000 fine and a police warning.

It was during his twilight years in 2011 against fierce rivals United when Carra carried out perhaps his most contentious challenge, a shin-high studs-up lunge on Nani, who escaped luckily with a mere cut on the shin — though that did little to prevent tears from the Portuguese 24-year-old.

As one of the greatest midfielders of all time, Liverpool fans became accustomed to Gerrard dragging his colleagues towards wins on his own.

Never a stranger to a ferocious challenge, the Huyton-born midfielder received eight red cards while playing for the Reds, one coming notably against Everton for a waist-high challenge on Kevin Campbell.

It was in his last season with the club when Gerrard shocked the footballing world against United. Aggravated by his increasingly bit-part role under Brendan Rodgers and with the Reds 1-0 down at half-time, Gerrard was brought on. In his first challenge, the captain clattered into Juan Mata much to the delight of the Anfield crowd. However, his emotions got the better of him and 38 seconds into the second half Stevie appeared to stamp on Ander Herrera, resulting in a sending off in his final game against the Mancs — much to their amusement. 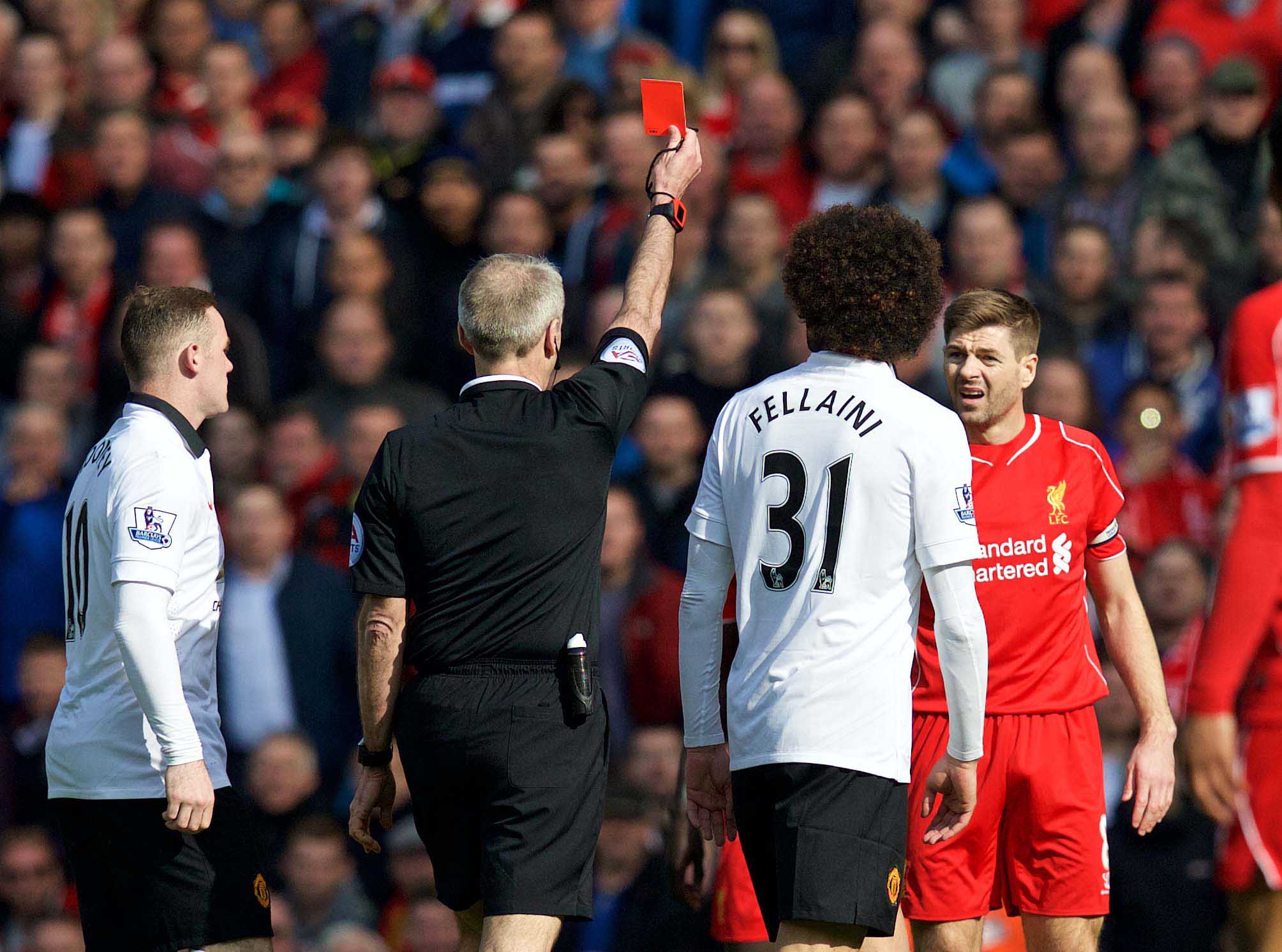 In his first stint at the club back in 2006, Bellamy was signed from Blackburn Rovers to fill the striker void at the time.

During the Welshman’s debut season at the club, the Reds faced Barcelona in the last 16 of the Champions League. The team’s schedule meant they had a free week before the Barcelona match, so Rafa Benitez decided to take the squad to the Algarve for a training camp in preparation for the game at the Camp Nou.

In an attempt to boost team spirit, player’s took it in turns to sing a song in front of the group, but left-back John Arne Riise refused to do so prompting some criticism from Bellamy. Riise eventually snapped and the two players clashed, with the Norwegian returning to his room. Initially restrained by Steve Finnan to little effect, an incensed Bellamy took matters into his own hands and proceeded with an eight iron towards Riise’s room. The striker twatted the bleary-eyed Riise on the backside and launched a torrent of abuse his way.

However, it was soon forgotten about as the pair ironically went on to score the two goals in the 2-1 win over the Catalans, with Bellamy famously celebrating his strike with a golf swing.

One of Rafa’s greatest signings, the Argentine was initially brought in on loan from West Ham in the 2007 January transfer window before making his move permanent in the summer. Nicknamed ‘Jefecito’ in his Argentina, the midfielder became adored among Reds for his aggression, tackling and effort.

In the same season of his solitary goal for Liverpool, Mascherano was embroiled in controversy at Old Trafford. Following a booking for a strong challenge on Paul Scholes, the current Barcelona man was too vociferous in his disapproval of referee Steve Bennett’s decision to award a foul against Liverpool, leading to his second yellow card.

The red card didn’t stop his verbal attack on the official and it took a talking down from Rafa on the touchline to eventually make the Argentine retreat to the changing rooms. His loss of control may not have helped as the Reds lost 3-0 that day, but if it wasn’t already his cult hero status was solidified after he commemorated Liverpool fans following Barcelona’s 2011 Champions League final victory over United.

Signed in 2011 to replace the hero-to-zero Fernando Torres, Suárez certainly left his mark at Liverpool. The 2010 World Cup saw the Uruguayan shoot to fame for all the wrong reasons with a goal-line save to deny Ghana a quarter-final place.

Fast-forward four years and the former Ajax man, who had served a suspension for biting an opponent before he joined Kenny Dalglish’s team, would be at the crux of football debates for the right and wrong reasons for years to come, though it seemed more often the latter until more recent times.

In Suárez’s first game back after his eight-match ban in 2012, Scott Parker’s stomach would feel the full force of the striker’s right boot. One year later against Spurs’ rivals, Chelsea, then managed by Benítez, controversy soared. After being tackled by Chelsea’s Branislav Ivanovic in the Chelsea penalty area, an inflamed Suárez impulsively appeared to bite the right-back’s elbow, engendering a 10-match ban.

The flawed magician would go on to complete a hat-trick of career bites at the 2014 World Cup on Giorgio Chiellini shortly before to his £75m pound move to Barcelona.