Hillsborough: The Media Let The Country Down For 27 Years

IN the course of my life, I’ve been in the fortunate position of being able to have a number of debates with Jimmy McGovern, a close family friend and someone I respect above all others.

The first took place in a Transit van on the way back to Merseyside from a weekend at Barnsley Workers’ College with the Scotland Road Writers’ Workshop, an organisation of which my late dad, Eddie, was a member.

It was 1984 and the miners’ strike was at its height. Being an idealistic eight year old from a fiercely political, even more fiercely left-wing family, I had all the answers. The assassination of Thatcher, Tebbitt, Ian McGregor and various other unmentionables was high on my agenda, as was a revolution that would usher in a socialist state run by the kind of people we had just spent a couple of days with in West Yorkshire. For whatever reason, kindness to an impressionable child, friendship to my father or whatever, Jimmy indulged me, listening to my rant and injecting the occasional bit of common sense on the rare occasions I paused for breath. 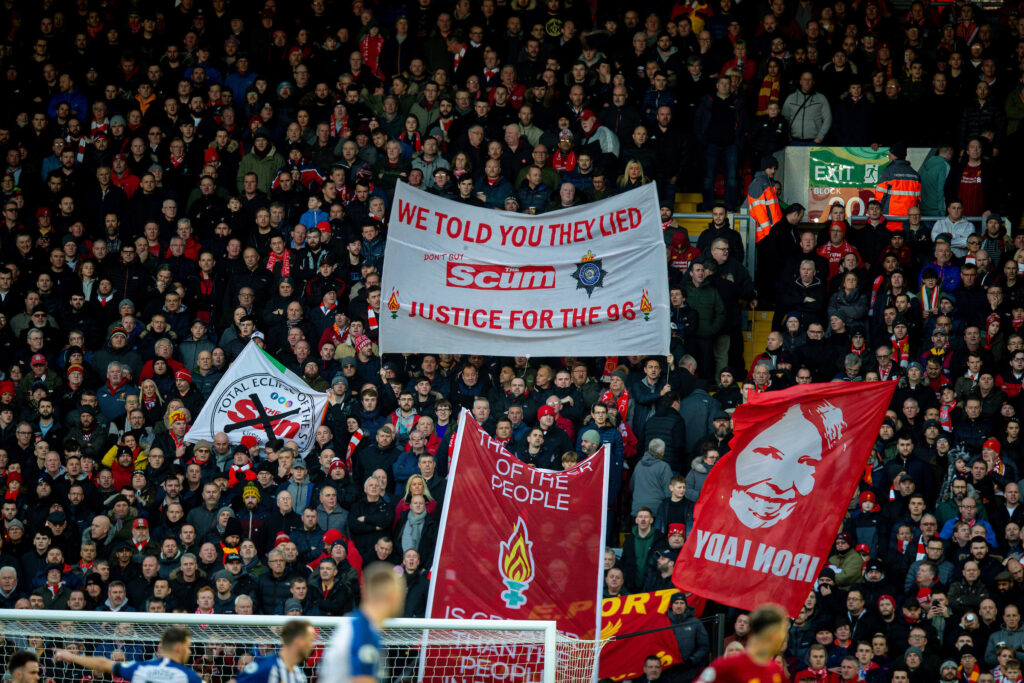 LIVERPOOL, ENGLAND – Saturday, November 30, 2019: Liverpool supporters on the Spion Kop display a banner “We Told You They Lied – Justice for the 96” remembering the 96 victims of the Hillsborough Disaster as the lies told by the Sun newspaper, before the FA Premier League match between Liverpool FC and Brighton & Hove Albion FC at Anfield. (Pic by David Rawcliffe/Propaganda)

More recently, before going to see Tony Benn’s Will and Testament at St George’s Hall we met at a pub on London Road and there was another debate, this time about Scottish independence. We did not agree on everything, but on the broad issue of what we wanted to happen there was consensus — we both wanted Scotland to go its own way for its own good but mainly because we both wanted to see a rocket fired up the arse of the English establishment. As with the miners’ strike 30 years earlier, we never got the outcome that we wanted.

But the conversation with Jimmy that sticks in my mind most was one that took place around a decade ago. The topic was Hillsborough and its various villains were all eviscerated. But then Jimmy said something that, as a journalist, jolted me. “We know about South Yorkshire Police, the FA, The Ambulance Service, the Tory government and all the rest,” he said. “But what about the media? What about the tradition of investigative journalism in this country? Where was the investigative journalism after Hillsborough?”

It is a question that haunts me because I know there isn’t an answer to it, not a good one anyway. The truth, to borrow a sometimes misused phrase, is that in the main the investigative journalism that needed to be done, the search for facts and the holding of authority to account, was carried out by grieving families and their supporters. If there is a more damning indictment of my own industry I cannot think of one. With obvious honourable exceptions — the peerless Brian Reade and David Conn in particular — journalists in this country failed the Hillsborough families, the 96 victims and those who survived the tragedy. It is a disgrace that we should all face up to. 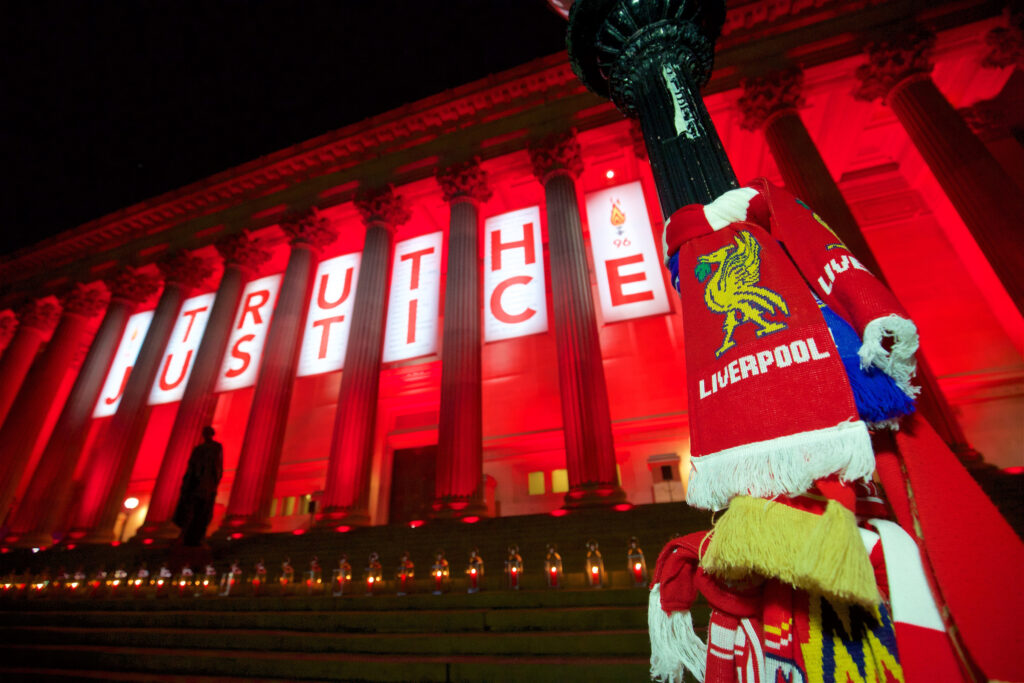 LIVERPOOL, ENGLAND – Tuesday, April 26, 2016: Liverpool City Council light up 96 lanterns and illuminate St George’s Hall on Lime Street in red along with a banner which names those who lost their lives in the Hillsborough Disaster on the 15 April 1989 and displays the words ‘Truth’ and ‘Justice’. This is to mark the verdicts in the two year inquest that returned a verdict of Unlawful Killing. (Pic by David Rawcliffe/Propaganda)

The easy thing would be to hide behind the despicable Kelvin MacKenzie, but given he is still finds employment in the very industry that should shun him it is hard to accept that his attitudes and his brand of journalism are unique to him. Indeed, there are still those within the media, even this very weekend when the lies have only just been nailed, who continue to argue that Liverpool fans must bear some responsibility for what happened at Hillsborough. Such beliefs are espoused not after attending a two-year long inquest, scrutinising the evidence and reaching a verdict as a jury member, but as a columnist who has to have his/her say regardless of how little research they have done.

It is rancid and it is indefensible.

But arguably more damaging than the things the media has done — the scandalous front page accusing fans of killing their own, of stealing from the dead and urinating on them; the vicious, ill-informed opinion pieces; the failure, even as recently as this week, to appreciate the gravity of the situation and give it the presence it deserves — it is what we didn’t do that was most damaging to the fight for justice. We didn’t do the basics of our jobs. We didn’t question authority as much as we should have done. We didn’t give a voice to the voiceless when they needed it most. In our research we did not go to the lengths that Professor Phil Scraton and Anne Williams went to to discover how the 96 victims came to die.

To borrow a phrase used at the inquests, we are guilty of negligence by omission.

Whenever major organisations make grave errors in public life, the done thing is to trot out some trite nonsense about how this will never happen again because lessons will be learned. The problem with the modern media is it is yet to accept the extent of its own failings where Hillsborough is concerned so we are not yet even at the stage of trite pledges. There is a sense of denial, a willingness to highlight the failings of others rather than shining a light on our own and a hope that if Brian Reade and David Conn keep on fighting the good fight they will cover up the rest of our inadequacies.

Now, more than ever, though, there is a need for everyone to face up to their own responsibilities.

If the national media, and particularly the print media, is to survive the post-Leveson era, then the sometimes cosy relationships between journalists (some, but not all) and authority figures need to be smashed once and for all.

For 27 years we let down the Hillsborough families and I, for one, am ashamed.

Jimmy, if you are reading this, you were right. End of debate.