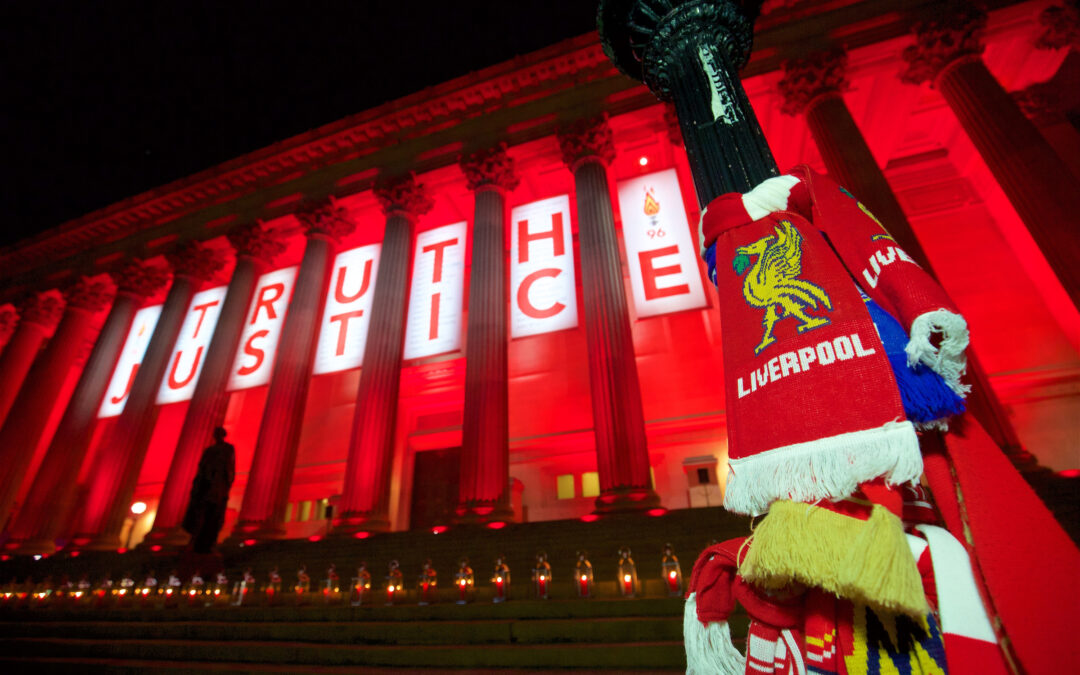 HILLSBOROUGH changed irrevocably the lives of 96 families, and thousands of survivors, writes DAVID WEBBER.  It was, as Neil Atkinson has powerfully and rightly argued, a national disgrace. It prompted a cover up to which successive governments would be complicit, and denied justice for 27 years to the families of loved ones whose lives were cruelly cut short.

Hillsborough also brought with it the slow and sickening realisation to fans of other clubs that it could have been them. That’s the idiocy of those who mock the disaster today. They are simply fortunate that their club did not make the semi-finals of the FA Cup that season. That they were not sent to Hillsborough. They were not allocated the Leppings Lane End. Yet Sheffield’s so-called ‘Wembley of the North’ was not alone in its dilapidation. Such was the terrible state of Britain’s decrepit, overcrowded, and poorly policed terraces, many fans had feared the tragic events of April 15, 1989 unfolding somewhere. 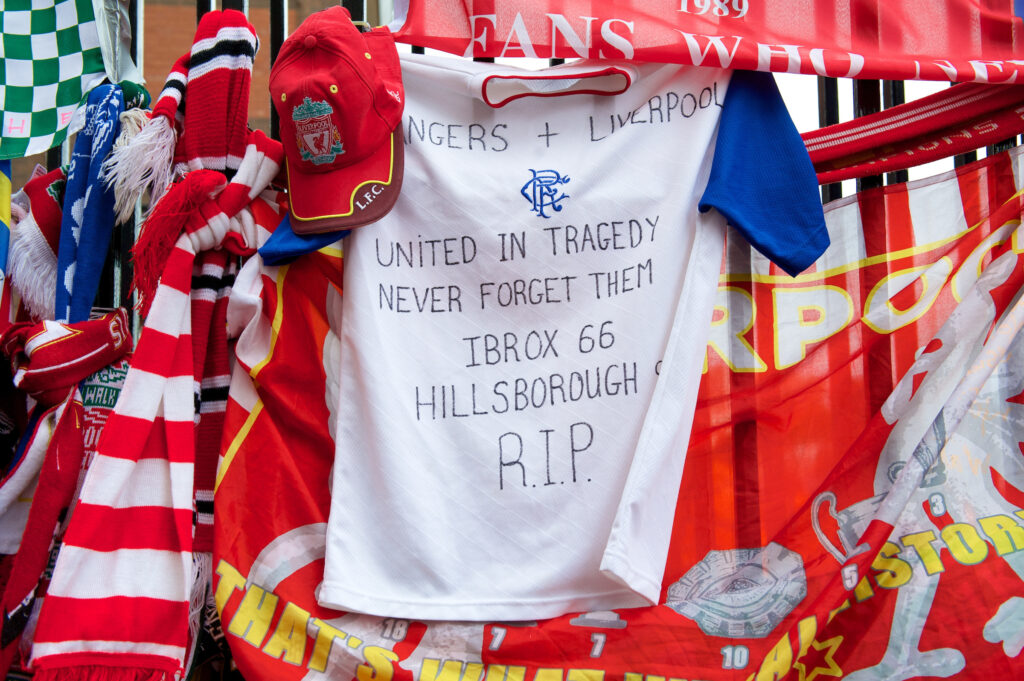 LIVERPOOL, ENGLAND – Sunday, September 23, 2012: Tributes left at Liverpool FC’s Shankly Gates before the Premiership match against Manchester United at Anfield. The release of the Hillsborough Independent Panel’s report shed light on one of the biggest cover-up’s in British history which sought to deflect blame from the Police onto the Liverpool supporters. (Pic by David Rawcliffe/Propaganda)

But even after the fire at Valley Parade in 1985, and the experiences of Leeds United fans two years later, whenever such fears were raised they were simply dismissed. Prior to Liverpool’s fateful semi-final tie with Nottingham Forest, the club’s then Chief Executive, Peter Robinson, contacted the Football Association, pleading with them not to house the travelling Reds in the much smaller Leppings Lane End. If he was ignored, what chance did ordinary fans have in articulating their concerns?

The authorities were animated more with the spectre of hooliganism, and this loomed large over attitudes towards football fans. Fans were not to be listened to but to be controlled. The sins of a few meant that all football fans were collectively caged like animals in creaking, crumbling pens surrounded by perimeter fencing.

For those responsible with managing matches, maintaining law and order was far more important than ensuring the welfare and wellbeing of supporters. Even in the aftermath of the disaster, as the deceased lay in a makeshift mortuary, victims as young as 10 were tested for alcohol, as if this was a contributory factor. The narrative of hooliganism and ‘drunk, ticketless fans’ provided the police with a convenient, if fraudulent, alibi to cover up their own incompetence and wilful neglect of human life. It was a deceitful lie repeated unashamedly and with relish by certain parts of the tabloid media, unrelenting in their support for Margaret Thatcher’s incumbent Conservative government.

The Taylor Report, the public inquiry into the disaster published in 1990, went some way in clearing the behaviour of Liverpool supporters at Hillsborough. However, after pressure applied by Thatcher herself following the release of the interim report, the final version stopped short of criticising the conduct and the culture of the on-duty police officers. Taylor focused instead upon Britain’s decaying terraces, ordering that they be modernised and transformed into all-seater stadiums. For the 27 years, the truth remained buried, and the authorities maintained that the Taylor Report contained all the lessons that needed to be learnt.

Now, the 14 landmark verdicts delivered at the Hillsborough inquests — including one declaring the 96 deaths unlawful killing, and another exonerating the behaviour of the Liverpool fans — not only vindicate the 27-year struggle for justice but also reveal the limitations of Lord Taylor’s original inquiry.

Taylor was right, of course, to absolve the Liverpool fans of any blame and he was right to criticise those who sought to pin culpability for the disaster upon anyone other than those responsible for the fans’ safety. But Taylor stopped short of properly holding to account those who had neglected their public and legal duty of care. By emphasising the need for all-seater stadiums, Taylor’s recommendations unwittingly supported the narrative that the fans were to blame.

Football has undergone a radical and much-needed transformation in the decades since Hillsborough. Futuristic, space-aged stadiums have replaced the pre-war relics that existed at the time of the disaster, and fans can now enjoy the game in relative comfort — albeit at a considerably higher financial price.

Yet supporters still find themselves subject to a series of draconian measures designed to curb and control their movements and behaviour. Measures that stem from the same attitudes that had been significantly responsible for the failures leading up to and during the disaster and attitudes that framed the lies peddled as ‘the truth’.

With these new verdicts delivered, now is the time to challenge and change these deep-seated and duplicitous attitudes, particularly regarding standing, terracing and the consumption of alcohol. So far, in England at least, ‘safe standing’ remains a controversial issue. Rejected by the government, principally (and somewhat ironically) out of respect for those who lost loved ones at Hillsborough, safe standing has nevertheless been shown to provide a far safer alternative to the all-seated stadiums recommended by Lord Taylor.

It needs to be stated that modern safe standing does not mean a return to the dark days of the huge, crumbling terraces and the lethal perimeter fences that penned supporters in like cattle. With a safety barrier on every row and rail seats that can be bolted upright, spectators can stand safely without the threat of crushing, overcrowding, or falling over the seats in front of them.

This technology has been successfully and safely introduced in Germany, Sweden and Austria — yet there remains a reticence amongst politicians and the game’s authorities in Britain to engage constructively with those who want to be able to stand safely. Even in the light of what the Hillsborough inquests uncovered, there is an frustrating unwillingness to prioritise crowd safety over crowd control.

The same attitude is evident in the disingenuous efforts to rid football of alcohol. The use of ‘dry trains’, where the sale and drinking of alcohol is forbidden on designated routes, and the continued ban on alcohol ‘within sight of the pitch’ (a law only applicable to football matches) implicitly fuels the myth that drink and drunkenness were contributory factors at Hillsborough.

There is little evidence to suggest football’s illogical approach to alcohol — again introduced by Thatcher’s government in the mid-1980s — actually has any effect upon violence. Equalising the regulations concerning drinking during matches with other sporting events would address the discrimination that football fans continue to face and, crucially will help erase the pernicious lie spun following the disaster that drink was to blame.

After 27 years, these new verdicts finally deliver what the families and survivors of Britain’s worst sporting disaster have always known: that their loved ones were unlawfully killed, the behaviour of those who survived was beyond reproach, and there was a cover-up to protect those who had failed in their duty of care. Their long march to justice is not yet over but the painful findings of these inquests can at least begin to bring some comfort and closure to those who have campaigned for the truth with such dignity and resilience.

That it took the families so long to reach this momentous stage is testament to their courage and determination. However, it is also a damning indictment of a political system that for more than a quarter of a century denied the families and survivors of the tragedy the real truth of what happened on that Saturday afternoon in April 1989.

Britain and the rest of football owe those who fought tirelessly on behalf of their loved ones, a debt of gratitude. They challenged and called into question the attitudes of those who govern both our society and the game that is woven into the cultural fabric of the country.

These attitudes now need to change. Football’s authorities, clubs, fans and the rest of society need to change the narrative that hindered the families’ struggle for the truth, reproduced the lies of Hillsborough and denied dignity to those who lost their lives.

Only then will lasting justice be finally delivered for the 96.