IT has been, without doubt, Fenway Sports Group’s boldest move since assuming control of the club five years ago. But even if Jürgen Klopp never wins a game as Liverpool manager (he will), even if his time in charge is an absolute disaster (it won’t be), he will leave having achieved something no man has done for over a decade.

He’s united a fan base that has at times been hell bent on tearing itself apart.

In hindsight, more than the debt, more than the in-fighting and fractures it caused within the club, more than the destruction of a bloody good football team, possibly the most damaging and lingering aspect of the toxic Hicks and Gillett debacle was the factions it created among Liverpool supporters.

From the moment, fresh from pounding the streets of Athens all night after defeat in the European Cup Final, a distracted and disillusioned Rafael Benitez intimated that all was maybe not what it seemed with Hicks and Gillett, the paranoia, deflection and spin began to manifest itself in all four corners of the club.

Some fans, frustrated by the defeat and the manner in which Benitez often agitated publicly took Rafa’s pelters as a man politicking, empire building, looking for an excuse, a way out or a new contract, depending on what week it was.

Even in the midst of the 08-09 title challenge at the height of the Hicks and Gillett civil war that would nearly bankrupt the club, Benitez was still held in contempt by surprisingly large swathes of the match-going support.

The Spaniard would further anger his detractors by signing a contract extension, obvious proof in the eyes of those that wanted him out that Benitez was exploiting the warring owners for his own benefit while still managing to fool those loyal to him

Around about this time saw the explosion of social media, a fine tool for radicalised idiots to find each other, a promised land for the pub bores and Champ Man anoraks of the nation.

The birth of the mostly faceless “I told you so brigade” that plagues football was born.

Ultimately, the powers-that-be in the club seized the opportunity of the media frenzy that followed a poor league campaign to relieve the Champions League-winning manager of his duties at the club.

It’s no exaggeration to say that the night Benitez was mutually consented by Christian Purslow some celebrated like they had won the lottery, whilst others, and I’ve no shame in admitting that I was one, drowned our misery in wine and beer and mourned Rafa like a long lost friend.

The divide was not only real, it was vicious and filled with spite.

But if we thought things were bad then, they were about to get a hell of a lot worse when the club replaced Rafael Benitez with the antithesis of what the club once stood for: Roy Hodgson.

Such was the entrenchment caused by the war with the owners and Benitez, many (myself included) howled with derision at the appointment, and weren’t shy in telling people who had been keen on ousting the previous manager of what we thought.

“Happy now, ey, lads? Look at the state of that cunt.”

And for a few glorious months it worked.

A fragile truce ensued, a run of fantastic results and brilliant football kept any dissent just below the surface, but the following season the cracks began to show and, as ever, it was never simple.

Inertia off the pitch fuelled a vacuum in the stands and among the fans.

There was a sense that the club were forced into giving Dalglish a permanent deal to appease the fans but were privately suspicious of Kenny’s capability to operate in a modern structure having been out of the game for such a long period.

Despite a League Cup win in February — the club’s first trophy in six years — and an FA Cup semi-final victory over Everton at Wembley, there was a sense of FSG planning on life after Dalglish.

And after finishing the season in eighth position on 52 points, and despite winning Liverpool’s last piece of silverware, Dalglish was called to Boston and given the bullet after 16 months in charge. 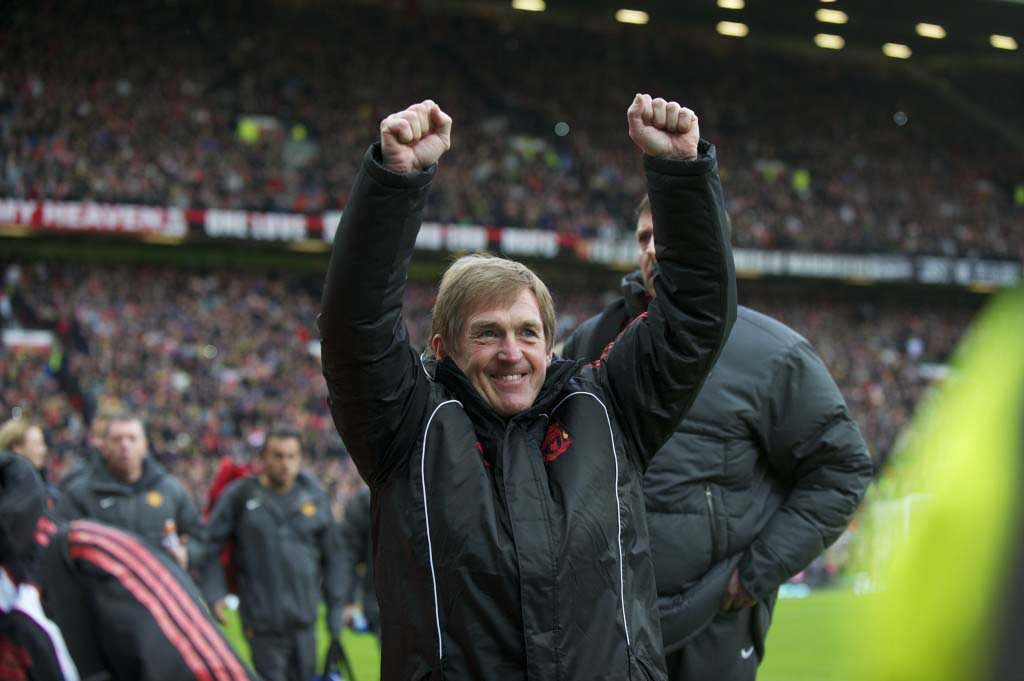 What happened next was a clusterfuck.

People close to Rafa Benitez made it known, rightly or wrongly knowing the effect it would have, that he would relish a return to Liverpool to finish off the job he started, and given the track records, or lack of, that other managers linked to the job such as Roberto Martinez and Brendan Rodgers had, it was incredibly difficult to understand why our owners wouldn’t at least speak to someone who on paper was out of our league.

It had long been suspected that FSG had been put off Benitez by elements within and around the club, and the fact that they would look to either Martinez or Rodgers before Benitez afforded further credence to the belief that Rafa had been stiffed.

“What are Liverpool doing giving a fella like Rodgers the job, what’s he won?”

It was a “project”. An experiment dreamed up in the Boston lab of marginal gains and hidden value.

But by now the nature of the warring and infighting, aided and abetted by the further growth of social media had changed how Liverpool fans communicated, and Rodgers, despite an impressive patter and amiable nature was up against it from the off and was viewed by some as a symbol of the club’s lack of ambition or rather, lack of a cast-iron will to win against all odds.

The seeds were sown before a ball was kicked and ‘Being Liverpool’ didn’t particularly help either.

But after a slow start, the near miracle of 13-14 bought Rodgers massive credit but, just like Houllier and Benitez before him, Liverpool failed to hit the ground running after finishing second the previous season.

A man who did brilliantly was suddenly struggling, the entire season previous was written off as a Luis Suarez-inspired fluke and the tensions and long held suspicions crept back over the horizon.

The reaction, sadly, was typical of what we became as a fan base; people who never liked Rodgers didn’t need much encouragement to make their views heard, and likewise, those so stubborn they would follow Rodgers over a cliff such was the determination to not let ‘those other bastards win’ grasped for any straw on offer.

Both sides searched for absolutes in a spiteful sea of grey and the race to be proved right and shout loudest was back on.

Yet again, being a Liverpool fan was exhausting, the language used in exchanges over a man doing his best in the most difficult job in football was depressing and debilitating.

Rodgers was subjected to the most vile, heinous personal abuse and insinuations all for the sake of not winning enough games of kick the ball in the goal.

The relish and venom in which the ‘I told you so’ brigade spat their ‘opinion’ was only matched by the glee in which it was delivered.

Even in the real world, where people have faces and being a shithouse has consequences, there were plenty who had a nagging suspicion from the get go suddenly becoming more noticeable, not because they began shouting louder, more that those who wanted everything to be ok became quieter with each passing week.

As with Dalglish before him, the writing appeared to be on the wall for a few weeks for Rodgers until the owners finally swung the axe. Then, given past behavior and the silence that emanates from Boston, it wasn’t a stretch to imagine the worst about what would happen next.

Another “project”, another “experiment”, another bright young thing that won’t kick up a fuss. Garry Monk?

More confirmation that we aren’t dining at the top table anymore, more entrenchment and seething resentment among people who keep score on the right and wrong about football scale. More division.

But then, something amazing happened.

The city has been buzzing for days — on a scale of 1 to 10, it kicked off at 11 and hasn’t let up yet and even better, everyone, and I mean literally EVERYONE of a Red persuasion, is happy.

Not one dissenting voice, not one “what abar this fella?” or a “fuckin’ shite, him” to be found.

More a sense of happy, staggering bewilderment that the club has made a decision that no-one saw coming until it was already done.

No pissing around flirting for weeks with an agent and telling everyone about it only to be trumped by a fella with a bigger wallet and flashier car at kicking out time.

Hopefully a sign of things to come. Liverpool Football Club have dealt with this appointment with absolute conviction and speed, and for that, they deserve a pat on the back, keep it up though eh, lads, and sign Reus, yeah?

The appointment of THE hottest property in European football has, in a few glorious days, put ambition back on the map and got the fan base firmly back on side and for the first time in years, united and feeling part of something boss.

Town has gone to town.

Someone and something to get behind, a fella who is clearly his own man and won’t be fucked about.

It was a day that many, myself included, thought beyond us, the fractures too deep and irreparable, the skills and ambition of the leaders of the club incapable of walking the walk.

But now, instead of having a stadium full of people ready to war with each other, for the first time in over 10 years, we’re ready to go to war together.

I’m always one for patterns and history repeating and the last time Liverpool showed enough balls and ambition to convince a fella who hadn’t long won two domestic league titles and knew his way around a European game or two to move to Liverpool the season didn’t end to badly did it?

And his first game as Liverpool manager?

Time to embrace the madness. Together.