LIVERPOOL: WHAT NEXT FOR ADAM LALLANA? 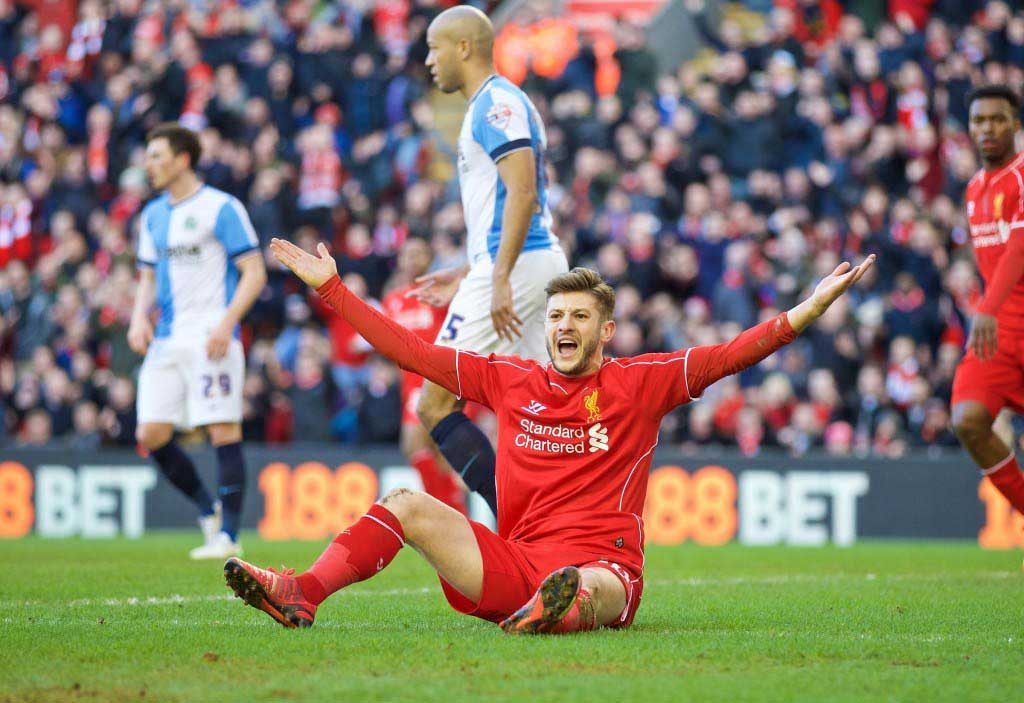 Not that running and battling aren’t important. Pace is the main asset defenders fear, physicality the main asset they employ. I get it. Adam Lallana is not perfect. No player can have been the target of the Main Stand’s most impossible collective demand, ‘BE STRONGER’, more often. For as long as he plays for Liverpool, or in fact anyone, he will disappoint those who like to see towering headers. But.

He’s special, Lallana. Unique. Perfectly balanced, two-footed, technically pure yet absurdly unorthodox. In every drag-back, every turn to buy a yard, every beautifully clean strike of a ball is the promise of something better — better than this. Better than a 0-0 home draw on a murky day in November. Better than this job, this haircut (but not his haircut), the next five years, the Labour leadership contest, pubs which put the big light on and people telling you who’s in their fantasy team this week (Ed: Erm…should you wish to join The Anfield Wrap’s Fantasy Premier League, our league code is 845952-207187).

And more importantly, less fancifully, there is the promise of better from Adam Lallana. Better than an injury-hit first season (and no pre-season) in a side going through an identity crisis. Better than an intermittent bright spot.

Neil Atkinson says Liverpool too often try to solve last season’s problems with their transfers for the next. There’s truth in this, but I don’t think this applies to Lallana. I couldn’t see him in the 2013-14 side. He’d score goals, he’d contribute, he’d decorate things. But I get the feeling he’d hold us up, put his foot on the ball, make something happen but not the thing we wanted, the thing we wanted to happen, the thing we wanted to happen again and again and again until defenders wished we’d just stop. Watch Juan Mata play for Spain, when they were nearly as good as Liverpool 13-14. That.

Last summer Lallana’s signing, I suspect, was seen as part of a conscious move away from this, towards what lots of fans insisted Liverpool needed in 13-14 — the ability to win 2-0, not 5-1. Because apparently that’s better.

Liverpool needed to grow up, evolve — move on from just winning football matches every week. Get a leader in at the back. Keep possession, be considered, be like everyone else around the top of the table but with a bit less money.

Now it looks like we fancy scoring goals again. But maybe not in the same way — without Suarez and Sterling (but hopefully with Sturridge), recreating 2013-14’s style would be tough. That season’s gone. So, mercifully, has the one which followed it.

But Liverpool have new footballers, footballers who have won before and footballers who have scored goals. Footballers who will do lots of good things, and lots of conventional things, because they are good fooballers. And they have Adam Lallana, neither one thing nor the other, uncategorisable, fluid, a man without a position who reminds you positions are really, really boring and you might as well stay out because you’ve missed the last bus anyway, so maybe text her and just see if she’s in town.

Sometimes I wish he’d release the ball quicker. Sometimes I wouldn’t have him in Liverpool’s first 11 — though I’ve barely seen one of those I might place ahead of him kick a ball. But when he’s on the pitch he’s the one who draws my eye. Of all the players I love — and that’s all of them — he’s the one I want to see play football the most right now.

And that’s pretty much what I’m in this for.