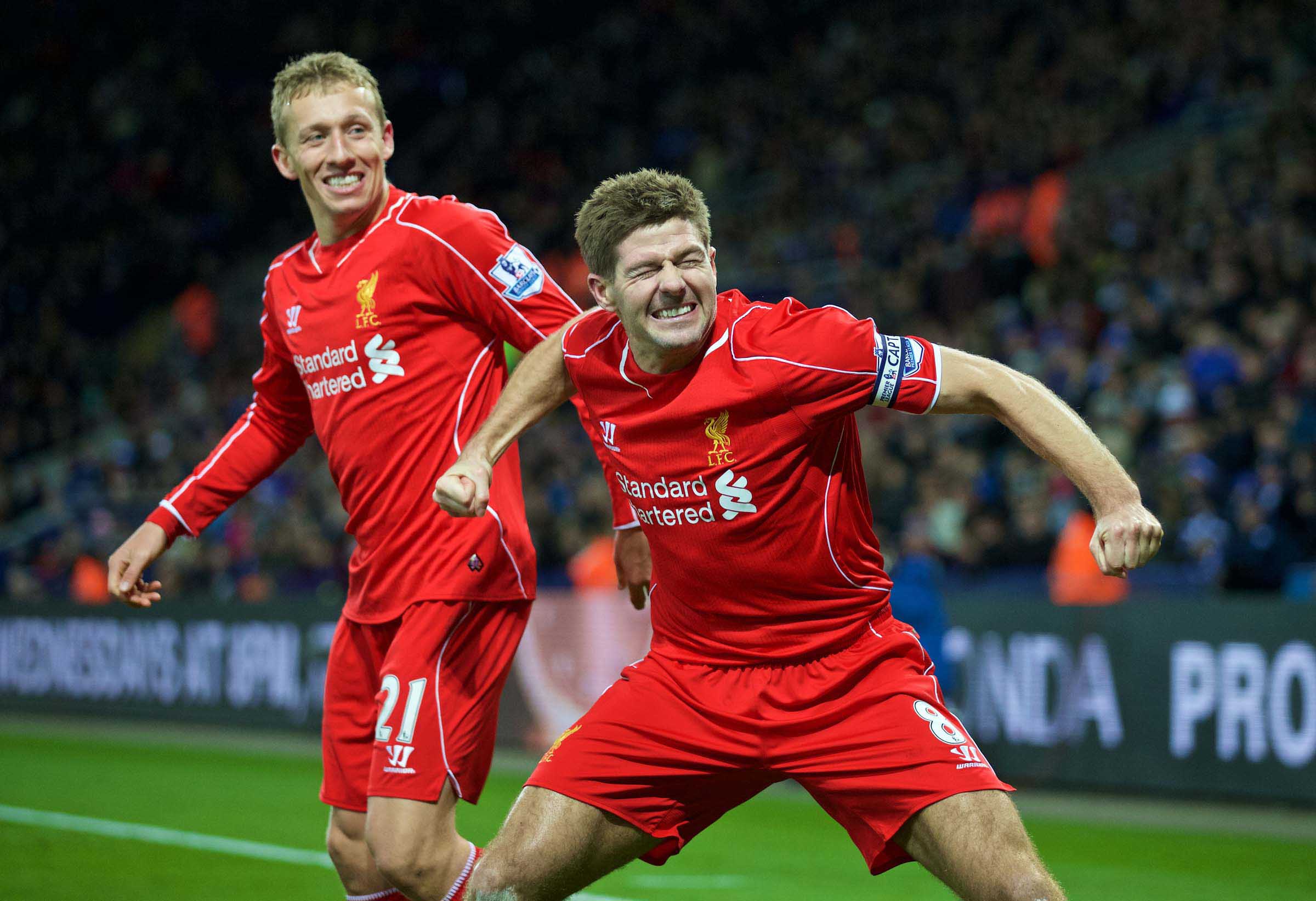 HIS face told the story before his words could; the frown lines deeper than usual, the eyes heavy and wrestling weariness, writes MELISSA REDDY.

Steven Gerrard is clothed in anxiety ahead of his Anfield farewell, and the threads are incredible weighty. He tries his hardest to hide his angst, but the cracks in his voice tell us what we already know: Saturday is going to twist, turn and tear every inch of the captain as everything he knows becomes everything he knew.

“I’ve been dreading this moment in a strange way because I’m going to miss it so much — playing at Anfield, playing in front of the fans,” he told a Melwood press room so packed, not even Philippe Coutinho could have found any space to exploit.

“I am going to miss playing with my teammates. It’ll be emotional, but the plan is to try and keep it together, stay strong and try and avoid the tears.”

There were times during Gerrard’s delivery where the crackle in his speech heightened and he had to momentarily glance down, breaking eye contact while halting any stream that was circulating in his tear ducts. Stevie did well to volley away the emotion with wit and well-worked responses, but he knows he’ll be engulfed at the final whistle against Crystal Palace tomorrow.

He won’t be alone.

Gerrard can’t prepare for it. Neither can we. You can envisage the scenarios, plan to control your feelings through any and every possibility, but it’s pointless. There are no tactics, no training, no special approach to waving bye bye to 17 years of memories and moments that define not only a great man, but in many ways, many of us too. A chunk of Liverpool’s support have not just watched Gerrard grow, but have done so with him.

My first puppy, my last year of primary school, navigating teenage rebellion, my first semester of university, hungover weekends, my initial nine-to-five job … There are countless personal episodes I can track back to and there he’ll be, fists clenched, supplying another to frame-worthy snap to characterise a period of my life. I suspect it’s the same for a fan in Malaysia, a father in New York, a daughter in Delhi, a supporter in South Africa, a son in Sydney… and you.

Gerrard is aware of this. He has always understood — perhaps sometimes to his own detriment — that he plays the game not just for himself and his family, but for millions who measure the club through his boots, whose experiences have been carved from his, and who live their dreams through his. It is why he did not select a specific individual or routine when asked what would be the hardest goodbye, but immediately offered “the supporters as a whole.”

If you’ve pictured yourself pulling on the Red shirt, you’ve imagined yourself representing the club like Gerrard — dragging it to triumph in the face of despair, firing it to trophies it had no business winning, bringing those video-game goals to reality, autographing tackles with authority, inspiring teammates with every touch, every pass… The impossible has always been plausible with him and we believed because he did, and he believed because we did. There is no bank balance, no mansion, no supercar, no designer brand that can separate Steven from supporters, and this is perhaps one of the reasons he feels so close — like an extended member of the family, a colleague — because he plays as you would, he cares as you do, he feels as you would, he hopes as you do.

In a sense it’s not the goodbye to a phenomenal footballer that stings the most, it’s seeing the back of one of us — a passionate supporter — who carried the club, the city and Reds worldwide everywhere: in his thoughts, on his shoulders, through his best days and worst ones. He’s not just leaving behind his home, his club, his city — but his people.

listen to ‘Brendan Rodgers on Steven Gerrard’ on audioBoom

Gerrard spent Thursday not mingling with media folk around his glorious cake, but continuing to serve his constituents. He invited Harry, a young supporter who had been waiting outside Melwood, to come in and take a picture with himself and the glass-encased European Cup replica.

After his press commitments, he dashed to spend his afternoon with the club’s Under-9 players, who were signing their first contracts.

Back at the training complex, every member of staff received a signed Gerrard shirt with a personalised message of thanks. When Brendan Rodgers remarked “you think he’s a great player, well, he’s an even better human being” it was no exaggeration.

He’s still spraying passes around too, trying to get off-field assists: urging the owners to scout proven quality in the window, and advising Raheem Sterling to commit his future to the club.

There have been five months for us to prepare for Saturday’s farewell, and even it were five years, we — Stevie included — still wouldn’t know what to do with ourselves when that final whistle goes.

He’s going to try not to cry. As will I. As you probably will. I’m odds on to fail, and I bet he’ll be swallowed up in the intensity of it all too. In the midst of the occasion, there will be those from outside quick to point out the absence of a Premier League winner’s medal, or recall a handful of mistakes in a 17-year career. There are no amount of shitty songs, played-out jokes, 140-character jabs or plastic posters that can diminish Gerrard’s influence and aura.

Nothing can reduce the way Steven Gerrard makes us feel. Clearly, given the great lengths and depths to deride him, he makes them feel too.

The greatest heroes make the greatest enemies, and for all the banter and bravado, even opposition fans will experience the emptiness when the legend departs.

So Saturday. Bring your tissues, bring your memories, bring your best defence. Stevie will bring his. Emotions will be going all-out attack. We’ll all probably lose, but has anyone ever actually won more out of one player? Out of one man? Out of an eight-year-old who turned into a symbol for the ages. Out of a person who took us up, down, around laps of honour and to unchartered territory through the very depths of his being?

Fuck sorry being the hardest word, goodbye is fucking shattering too. Even if it’s only temporary…