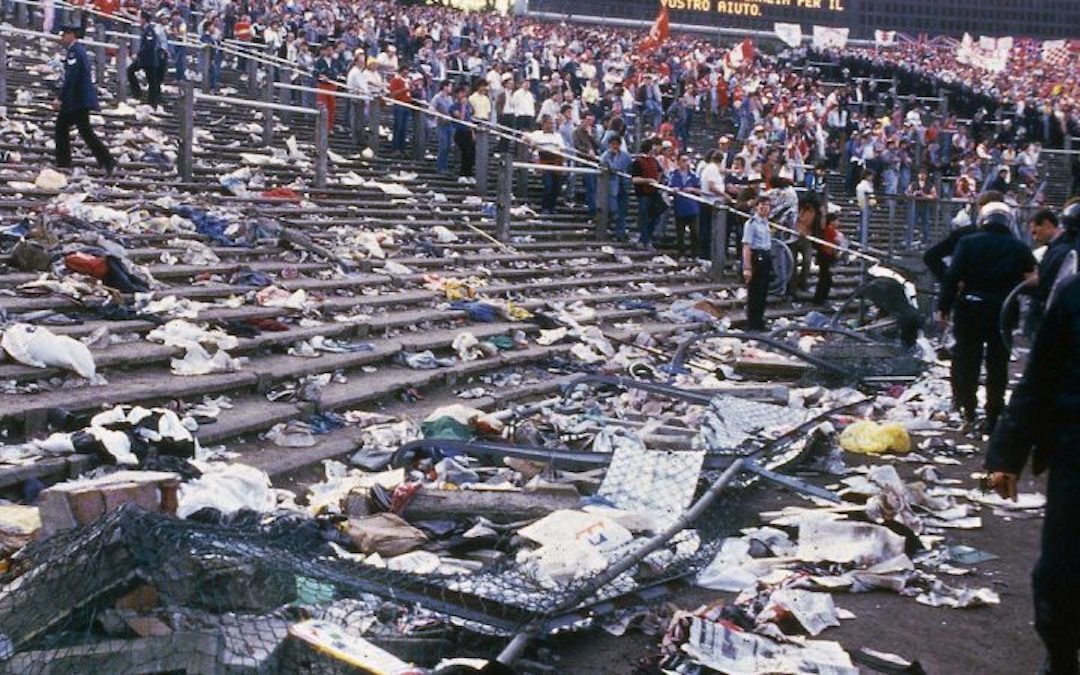 THIRTY years ago this week a group of Liverpool fans repeatedly charged towards supporters in section Z of the Heysel stadium. Inadequate chicken wire fence did nothing to prevent them running free among rival supporters and 12 policemen stationed to keep them apart simply ran away, according to eye-witnesses.

Fleeing from a quick fire series of three stampedes, terrified Juventus fans retreated to a corner of the Z section and tried to climb a wall to escape. In a tumble down stadium ill-suited to the occasion of a European Cup final, a wall crumbled and fans were crushed to death in a sickening human pile up.

Thirty nine people — 32 from Italy, four from Belgium, two from France, one from Northern Ireland, the youngest 11 years old — died.

Nothing can ever excuse the actions of those wearing the colours of Liverpool that made the charges that day. They had to live with the consequences of their actions. But at least they came home.

Thirty-nine football fans went to watch the game they loved and didn’t ever return to the arms of their relatives.

If a collective anger from their families and fellow Juventus supporters is aimed towards Liverpool the club, Liverpool the city and Liverpool the people, it is perfectly understandable. Their anger is also aimed at the football authorities, the police forces on the day and even their own football club — for playing the match, for celebrating the victory, for doing little to remember their loved ones for too long (a charge that can also be levelled at Liverpool FC).

The needless deaths of 39 football fans on May 29, 1985, has been — and will forever remain — an indelible stain on the reputation of Liverpool fans. But that it is used as an opportunity to point score is a sadness in itself. It is also among the motivations for trying to put the record straight with what we are doing here.

Those Liverpool fans identified from video footage as being key to the tragic events at Heysel were brought to justice.

In September 1987, following an investigation by Merseyside Police, Britain’s biggest ever mass-extradition began with 25 fans transported from Wormwood Scrubs in London to an RAF base in Oxfordshire.

They were flown to Belgium in a military aircraft and driven to the law courts in central Brussels, where they were questioned and formally remanded by magistrates.

One man remained in the UK awaiting trial for a separate offence.

The youngest of the number was 18, the oldest 29. Their jobs ranged from painter, rail guard and labourer, to miner, electrician, carpenter and greengrocer’s assistant.

Fourteen of the extradited fans were found guilty of voluntary manslaughter after a five-month trial.

Jacques Georges, the Uefa president at the time, and Hans Bangerter, his general secretary, were threatened with imprisonment but given conditional discharges.

Albert Roosens, the former secretary-general of the Belgian Football Union (BFU), was given a six-month suspended prison sentence for “regrettable negligence” with regard to ticketing. So was gendarme captain Johan Mahieu, who was in charge of policing the stands at Heysel.

Two days after the 1985 final Uefa announced an indefinite ban on English clubs. It was upheld for five years, with Liverpool serving a sixth as punishment for their supporters’ behaviour.

Those are the facts.

Around the facts is a wider tale; context for the sad events of that May day 30 years ago. That context warrants discussion, here and elsewhere. But it is only that. Context. Not an excuse.

Here on The Anfield Wrap, we want to talk — fairly, honestly and respectfully – about Heysel. This week’s anniversary has offered us the opportunity to do just that.

We want to challenge the myth that Liverpool supporters will not speak of that day or accept that some of their own — from the same streets, supporting the same team — were culpable in the deaths of fellow football fans.

Heysel is routinely referred to as the forgotten tragedy in the wider world, perhaps reflecting the history of inadequate and inappropriate responses from both Liverpool and Juventus football clubs.

But among fans? It is not forgotten by any Liverpool fan I know. Nor should it be. It appears the same applies in Italy among the Juventus fans.

My first-hand recollections of what happened that night are vague. I was eight. Nearly nine. And I was in the back room of my parent’s house rather than on the terraces in Brussels.

I have the vaguest of memories of watching confusing news reports and disturbing images where football should have been, nothing more. But I have friends and family who were there on the day. I have heard the stories first hand, read the books, watched the videos and seen the pictures.

It was a different world; a shocking contrast to the football matches of today which have become — in the main, and in England at least — family-friendly occasions.

Three decades have passed and there are generations of fans who will know little of Heysel. They will not know of how it was to be a football supporter in the 1980s. Of the hooliganism that prevailed among the support of almost every club. Of the woefully inadequate infrastructure of the game. Of the ill treatment and unwarranted stereotyping of the common fan by the wider world.

What they do know and experience is that some rival fans think we should be reminded that we are “murderers”. We are told that “we’re always the victims but it’s never our fault” while some supporters chant about winning European Cups “without killing anyone”. “Thirty nine Italians can’t be wrong,” they say.

The suggestion — sometimes implicit, often explicit — is that Liverpool fans are willfully hiding from the truth. Desperately covering up a dark day. That we will not talk about those who 30 years ago travelled abroad to watch a European Cup final against Juventus and returned to England with blood on their hands after they were aided and abetted by a depressing set of circumstances that should never have been allowed to occur.

So we’ve talked about it.

At length. In depth. From all angles.

To people who were there on the day. To supporters who recognise fans at the front of the Liverpool charge that were known hooligans. To long-standing fans of the club who remember the dilapidated stadium in Brussels, and the disorganised chaos of the policing and ticket selling on the day. To Italians. To Juventus fans. To national journalists deployed to Brussels to tell the tale.

We have sifted through the boxes of statements from the accused and witnesses that were presented to the courts as evidence. We have reproduced extracts from a book that was painstakingly researched and written in the wake of Heysel only for it never to see the light of day and lie gathering dust as the events at Hillsborough left a world without an appetite for its contents.

Liverpool the club once tried to brush Heysel under the carpet. There is plenty of evidence which says Liverpool the people did not do the same. We’re not doing that now, either.

We hope that our coverage of what happened 30 years ago can challenge some of the myths around Heysel and the reaction to it in Liverpool. It is a low point in the history of the club. But that doesn’t mean it should not be discussed.

May 29, 1985 will be a date never forgotten in the city of Liverpool and among Liverpool fans. Nor should it be. The 39 people who died at Heysel will always be remembered: