WHY EVERY LIVERPOOL FAN SHOULD BOYCOTT THE GAME AT HULL

THE cost of Football is becoming outrageous, writes PHIL BLUNDELL. I say ‘becoming’ but — if we’re being honest — we’re already past that point.

I remember us refusing to take the full allocation at Chelsea in 2004 when it was announced they were charging us £49. I also remember Arsenal’s last game at Highbury costing me £36 (I think, and not a cost I had too much issue with at the time).

It looks like everyone is well and truly on board.

There will obviously be a few who aren’t, and that’s up to them, but if you’re reading this and going, please never complain about ticket prices again because you simply don’t have the right.

Imagine having to be the Hull employee who explains to the big boss why exactly there’s a huge hole in money that’s already been budgeted for: “Well, we’ve got 2,000 primary school children turning up apparently.”

Empty seats don’t make an atmosphere do they? If every ticket in that away end is sold for £10 it would cost Hull around £100,000 in lost revenue. A number that while not huge in comparison to the money pouring into the game from mind-boggling TV deals would undoubtedly make the club, and the powers that be in football, sit up and ask questions.

If every ticket were to be sold, Hull would make £125,000 from them, take the TV money into account and this money is a drop in the ocean — so why are fans being exploited every week?

Hull charged visiting Liverpool fans £35 last season. So what’s with the extra £15 this time? Have a look how much Sky have committed to paying for an individual game in this new TV deal. £11million a match. And that isn’t even taking into account the additional overseas TV deals. It’s just Sky. It’s eye-watering.

Not, however, as eye-watering as a Stoke fan paying £15 for the same seat last August that is now being offered to the Liverpool fan for £50. Stoke £15. Everton £35. Liverpool, Arsenal, Manchester United £50. I don’t know what Stoke fans do in job interviews, but I don’t think they would walk out taking a wage of less than 1/3 of what I would for the same job. Why should what is a leisure pastime be different in reverse? I didn’t choose to support Liverpool, I just support the team I was brought up to — the same as Stoke fans. That we are of a higher profile, and have won more in our history, shouldn’t mean that I have to pay a tax.

I’d also like to point out that not a single person who has paid £10 for this ticket has anything to do with how Liverpool’s tickets are priced. Nor do we agree with them. Nor do we want to see people being charged in excess of £50 to watch a match through the famous Anfield Road Back Row Letterbox. 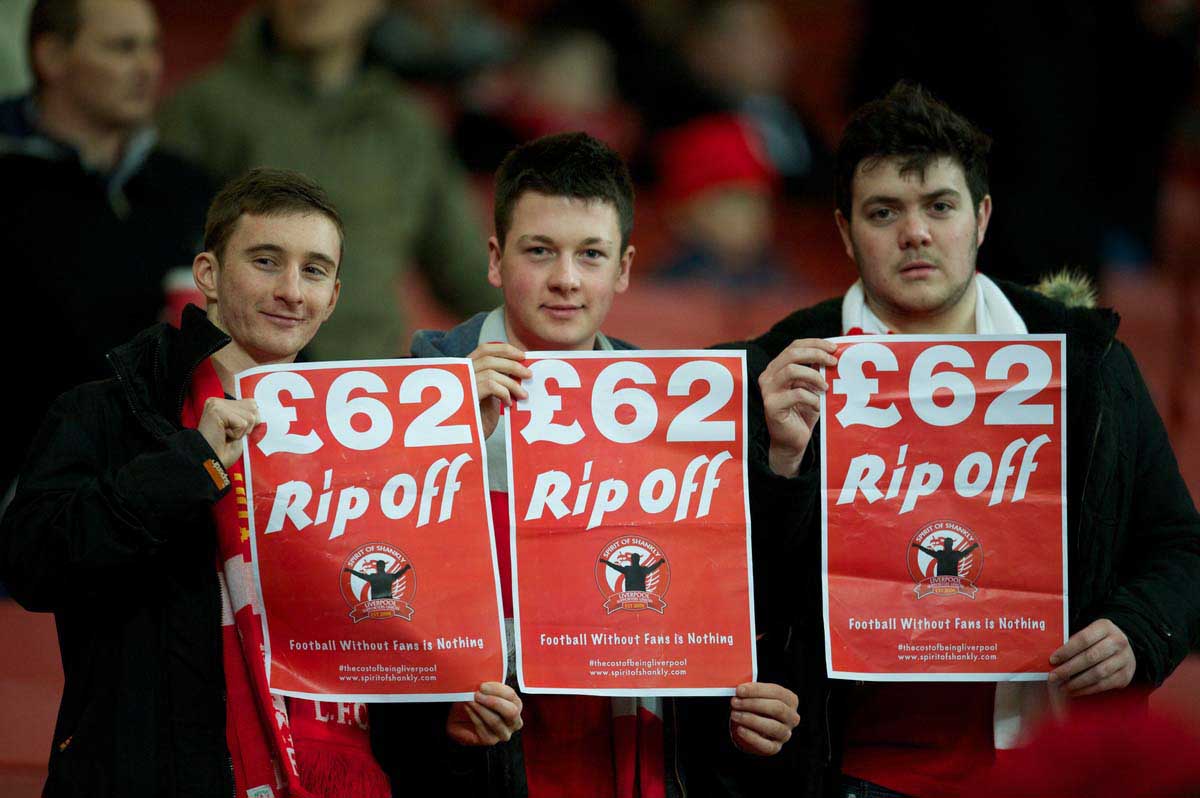 So please, don’t try to use that as an angle of attack if you support another club, are reading this and have an overwhelming need to try to make out that there’s any hypocrisy going on. Yes, there’s a ‘don’t buy the ticket argument’ but it’s not a very good one. What happens then is that someone else buys the ticket and not a jot of difference is made.

You don’t like Liverpool? Fine. I probably don’t like your team either in all honesty because I hate everyone. We’re trying to make a difference. Why have you got a problem with that?

With the new TV deal, every ticket for every game at Anfield could be sold for £12 and the club would have the same money as before the deal. Get your head round how utterly bananas that is. The same applies to every ground around the country.

If you’re eligible for a ticket for Hull, join the hundreds who’ve already followed the SOS lead. Buy a kids’ ticket. And stay away. Make a stand. It can’t continue. £nough is £nough.

– Read: Why ALL football fans should support the Hull boycott