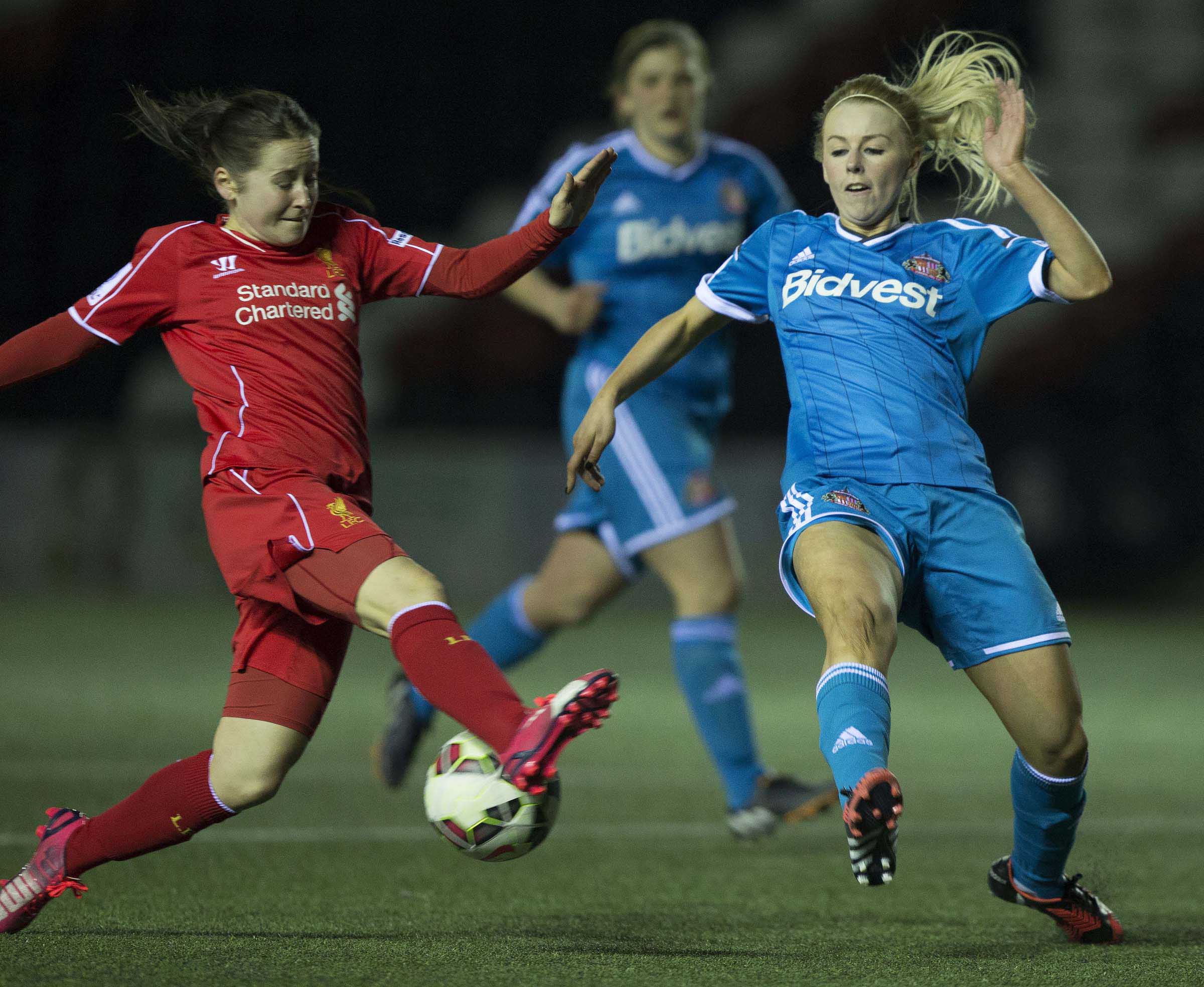 NEWLY-PROMOTED Sunderland stunned reigning champions Liverpool Ladies on the opening night of the new Women’s Super League season as the Reds crashed to a 2-1 home defeat.

The Wearsiders took a 1-0 lead in at half-time after Beth Mead had opened the scoring at the Select Security Stadium in Widnes.

Ex-Everton star and Sunderland debutant Brooke Chaplen doubled the visiting side’s advantage from the penalty spot before Liverpool’s American central defender Satara Murray pulled one back for the Reds.

That set up a grandstand finish and the usually clinical Natasha Dowie hit the crossbar for Liverpool but it was Sunderland who left Halton with the crucial first three points on the board.

Reds boss Matt Beard made four changes to the side that lost at Birmingham in the FA Cup — most notably bringing in Martha Harris and Ingrid Ryland to play as wing backs. Corina Schroder moved alongside Murray and captain Gemma Bonner in the centre of defence ahead of Libby Stout between the posts.

Fara Williams, Asisat Oshoala and Dowie kept their places in the starting line up, with Nicole Rolser coming in to play alongside Dowie and Katie Zelem getting the nod in midfield.

Sunderland Ladies kicked off, immediately pumping a long ball forward which fell to the feet of Stout in the Liverpool goal. Stout passed the ball out from defence, but as Schroder tried to pick out Rolser with a long ball it was intercepted and ended with a Sunderland throw.

It was the team from the north east that looked more switched on in the early stages with Sunderland’s England under-23 international Mead, chasing her 60th goal for last season’s WSL2 champions, looking a constant threat and linking well with Keira Ramshaw on the right wing.

Later Mead skipped past Schroder, but her international team mate Harris was wise to the threat and snuffed out the danger from behind to poke the ball to Murray.

The two Reds then combined when full-back Abby Holmes broke into the Liverpool box, Murray dispossessing her and Harris clearing the danger.

Liverpool’s first opportunity of the game came when Nigerian forward Oshoala picked up a loose ball in front of the Sunderland defence before cutting it back for the incoming Williams who shot first time only to see her drive trickle wide of the post.

Five minutes later Rolser almost capitalised on a mix-up between the Sunderland centre-backs but keeper Rachael Laws –  a league title winner with Liverpool in 2013 – reacted quickly to avert the danger and Rolser eventually ran into traffic, passing back to Ryland who had made a forward run but the Norwegian could only shoot wide.

Rolser then almost went through on goal again when Liverpool were quick to counter following a Sunderland free kick, Schroder’s block sending the ball forward and Williams carrying it out and attempting to pick out the run of the German midfielder. Her charge forward was well-matched by the Sunderland defender giving chase and the ball fell safe to Laws.

After Liverpool had posed some threat, Sunderland enjoyed a good spell midway through the first half. A couple of balls in from the left causing danger before a long-range strike from captain Steph Bannon. The Black Cats’ high pressing game meant that Liverpool’s wing backs were struggling to get forward and more often than not their services were required to help out with defensive duties. 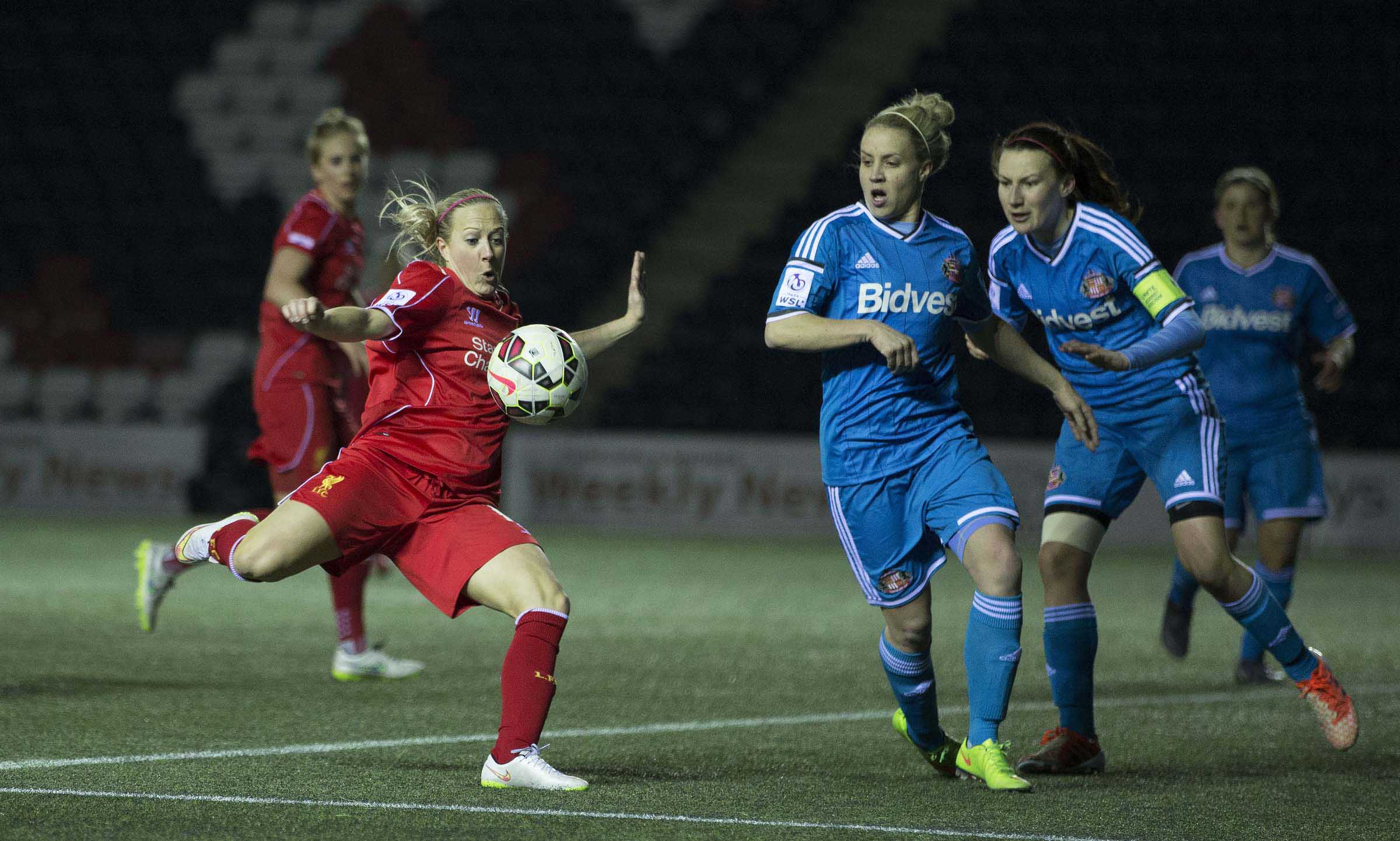 The breakthrough opening goal came on 27 minutes, Ramshaw whipping a cross in from the right which drifted past Liverpool’s backline and fell to the head of Mead who nodded home at the far post.

Liverpool reacted by pressing higher up the pitch and putting more balls into the danger area — first Schroder’s cross was cleared before it with Oshoala lurking then Bonner’s long ball for Dowie was shielded to safety by Abby Holmes.

Bonner put another good ball in moments later with Ryland moving it on to Dowie. It was shifted out wide to Rolser and back to Bonner before her first-time ball found Oshoala on the edge of the six-yard box but she couldn’t find a finish and her strike went over the crossbar.

Oshoala had become more involved as the game had wore on and her commitment was epitomised when she lost possession in midfield shortly before half-time but chased all the way to the opposite end of the field, winning the ball near to the Liverpool corner flag.

The sides emerged unchanged after the break and Ryland enjoyed a stellar second 45 and in one raid into the Sunderland half she held off the full back well to earn a corner which  Oshoala headed wide. Ryland then swung in a terrific ball across the six-yard box towards fellow wing back Harris with Sunderland holding on at the expense of a corner that despite a scramble eventually landed in the arms of Rachael Laws.

Liverpool enjoyed the majority of possession during the second half, with Dowie dropping a little deeper at times to win the ball back in midfield. One interception from the forward almost led to Rolser having a free run through on goal after Williams spotted her run. She appeared to go down in the box, nudged from behind just inside the area but nothing was given by the officials.

If Liverpool were unfortunate there, the Reds had a little luck go their way just before the hour when a Williams free kick was sent behind by Murray only for the referee to give a corner in Liverpool’s favour. 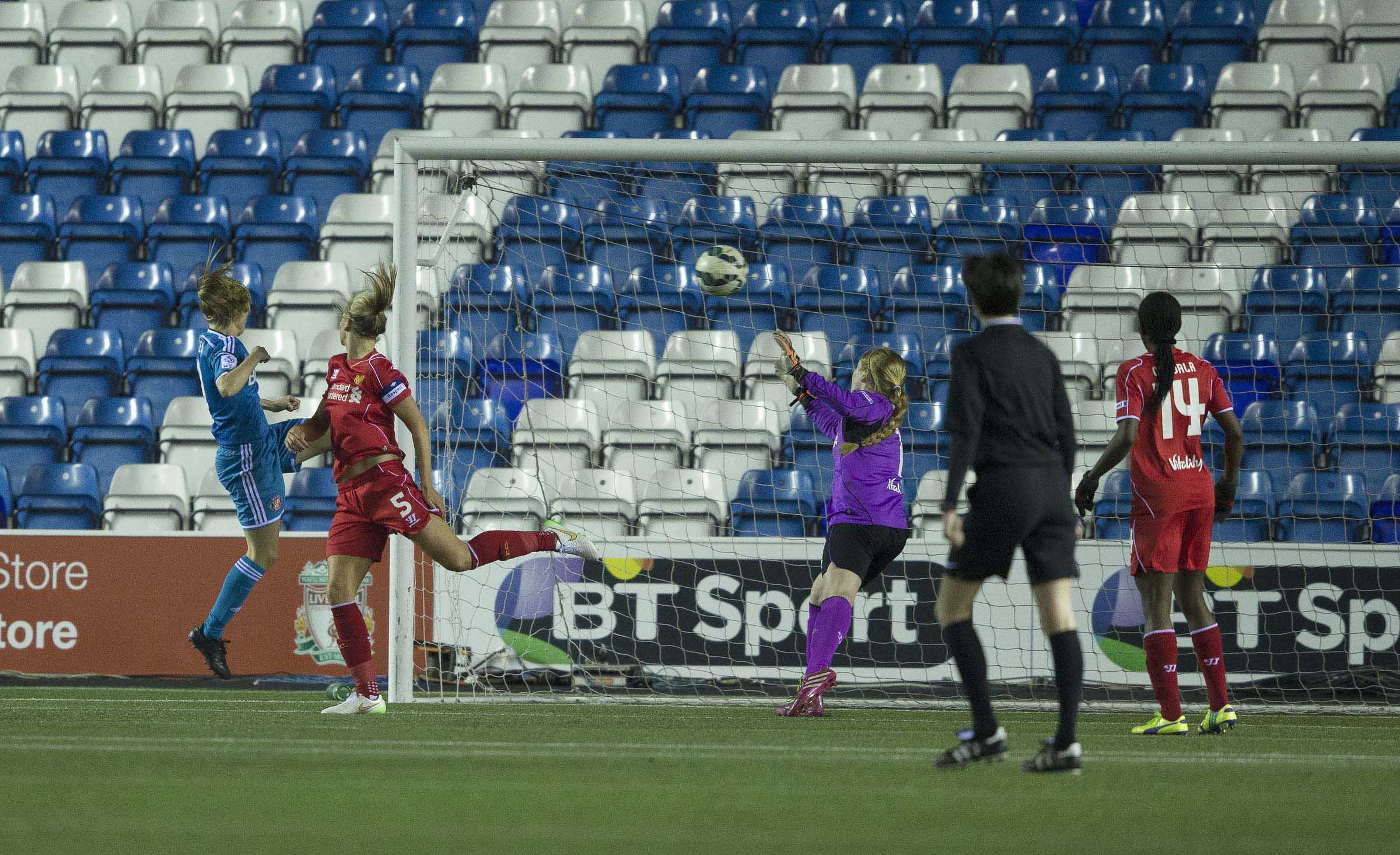 Unfortunately the Reds couldn’t capitalise on it but by now they were looking the more likely team to score with Oshoala heading wide from a corner and then taking a chance from the corner of the 18-yard box only to see her curling 18-yard strike caught by Laws.

With time running out, Beard made a trio of second-half substitutions for Liverpool, Lucy Staniforth replacing Oshoala in her first competitive appearance in 22 months following two successive cruciate ligament injuries.

Attacker Line Smorsgard made her league debut, along with 16-year old defender Mayumi Pacheco, who was introduced during the closing stages.

Despite dominating possession and carving out a string of chances, Liverpool failed to make their territorial advantage pay and that proved costly with 13 minutes remaining when Murray was adjudged to have fouled Mead in the area.

Chaplen stepped up to impressively score past Stout from the spot, the second penalty Liverpool have conceded in just two games.

Liverpool did eventually pull a goal back with Murray scoring on her league debut for the club but despite Dowie hitting the bar with a header and Staniforth also striking the woodwork with the rebound it ended up as a frustrating night for the Reds.

Liverpool Ladies are next in action Wednesday, April 1, when they welcome Birmingham City Ladies to the Select Stadium, Widnes, in the league at the slightly earlier time of 7:30pm. Entry is again free to all Anfield season ticket holders, otherwise £5 adults and £2.50 concessions on the gate.

Player of The Match: Rolser