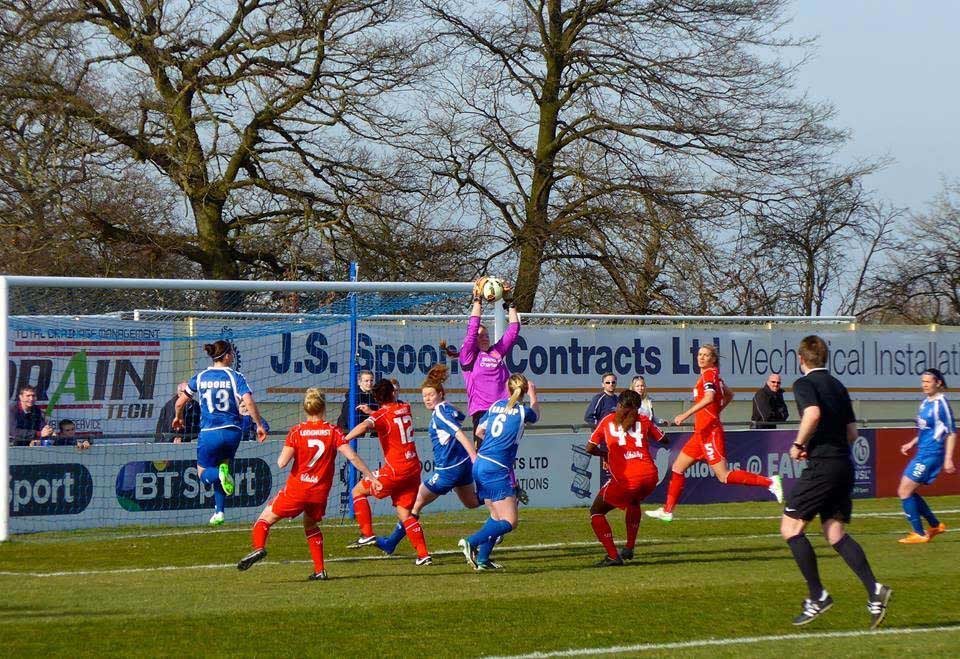 LIVERPOOL Ladies exited The FA Cup at the fifth round stage yesterday after suffering a 3-1 defeat away at Birmingham City Ladies.

The Reds’ Natasha Dowie had headed a first-half equaliser for the reigning Super League champions to level things up after Birmingham had taken the lead at Damson Park through Jade Moore.

But Birmingham scored goals either side of half-time to take themselves into the quarter-finals at Liverpool’s expense.

Three of Liverpool’s winter signings were given their first competitive starts, with 20-year-old Asisat Oshoala — the first African to join the Women’s Super League — starting and playing just behind Dowie, and in between fellow new arrival Line Smorsgard and Kate Longhurst.

Satara Murray also made her debut alongside captain Gemma Bonner in defence, with Becky Easton at right-back and Corina Schroder on the left in front of Libby Stout in goal. Fara Williams and Hannah Dale completed the starting 11 in the centre of the Reds midfield.

Birmingham, the 2012 FA Cup winners, got the tie underway, with Dale standing strong in midfield, winning possession and drawing a foul. Despite this Liverpool’s struggled to retain possession during the opening stages and Easton was called into action early on with one of her now trademark sliding tackles after Birmingham had slipped the ball through to take the Reds’ central defenders out of the equation.

Liverpool conceded a string of corners in quick succession on two occasions in the first half, with Birmingham swinging good balls into the box and only poor finishing preventing them from taking the lead — first a shot going wide of the post and then a header.

It wasn’t all Birmingham though, with the Reds having a couple of good opportunities themselves, Oshoala — who is nicknamed “Seedorf” — was winning every header and an early flick-on to 26-year-old Dowie, Liverpool’s top scorer last season, was returned to the Reds no.14 but her cross went over the line.

Liverpool then forced a corner of their own; Williams’s set piece cleared only as far as Dale. As she was closed down she turned and passed back to Easton who had spotted Williams still in space out on the right. The ball was fed back out wide to the midfielder but her first-time volley shot-cross was saved by Birmingham keeper Becky Spencer.

Another Liverpool chance came when Smorsgard attempted to quickly break out after a Birmingham corner. Smorsgard was fouled and Bonner’s free kick almost made it to the feet of Dowie who was beaten to the ball by the quick to react Spencer.

Liverpool then found themselves under pressure again, the Birmingham midfield pressing high up the pitch and causing the Reds’ defence a string of problems, twice forcing Bonner to see the ball back safely to the hands of Stout.

The Blues found themselves in the lead shortly after 15 minutes, captain Moore slipping through to score the opening goal.

Birmingham’s goal seemed to revitalise the Reds and they soon began to push for an equaliser. Longhurst had a header saved from a Williams cross before Schroder and Smorsgard almost combined to set Williams up moments later.

Lost it in the first half. Time to concentrate on the season now… Great support as always from our fans. Hope you're ok @Chelsea_Weston2

Liverpool’s efforts were soon rewarded when Bonner sent a free kick hurtling towards to left corner flag. Smorsgard picked the ball up, brilliantly beating the Birmingham right back and sending the ball back towards the incoming Schroder whose first-time cross was nodded over the line by Dowie to draw the scores level.

Following the equaliser Birmingham’s Chelsea Weston went down off the ball, picking up what looked to be a serious knee injury and receiving lengthy treatment on the pitch before being stretchered off.

When play resumed, Liverpool conceded a free kick 25 yards from goal and England international Jo Potter put Birmingham back in the lead with a great strike from the set piece.

Despite eight minutes of  injury time at the end of the first-half Liverpool couldn’t conjure up a second equaliser and went in at the break trailing 2-1.

The second half proved to be a frustrating 45 minutes for Matt Beard’s Reds, made no easier by a couple of poor refereeing decisions. A throw-in deep in their own half given against them was to be the least of Liverpool’s worries after Oshoala was seemingly pulled back in the 18-yard box after an excellent cross in from the right. It certainly looked to be a foul but nothing was given by the officials.

Liverpool again found themselves under pressure, a mazy run by Melissa Lawley saw her pass a number of red shirts before Easton swept up to snuff the danger out. Smorsgard also got an important touch on a long-distance strike from Moore, doing just enough to divert the ball into the grateful arms of Stout.

It was a great second half for the Liverpool keeper with the No.1 confidently catching a number of free kicks into the 18-yard box and quickly sending the ball out in an attempt to catch the Blues on the counter attack. One particular counter saw Dowie get a lovely touch on the ball, clipping it out wide to Ingrid Ryland, who had just replaced Becky Easton in a straight swap at right back. The Norwegian sent it forward to Oshoala but her cross went behind for a goal kick.

Never enjoy losing but Champions know how to bounce back. First league game Wednesday. Let’s get back to winning pic.twitter.com/lPWRvXrxlg

Midfielders Katie Zelem and Nicole Rolser came on during the second-half, replacing Dale and Smorsgard as Liverpool chased an equaliser. Rolser had a chance to equalise after Williams let the ball roll under her foot just outside the 18-yard box but the strike went agonisingly over the bar. The winger also nearly set Bonner up for a chance late on, her cross falling nicely to the Reds captain but her drive drifting wide.

Committing so many players forward left Liverpool exposed slightly at the back and, as the half progressed, Birmingham became more content to sit back and settle for what they had, a point underlined at one corner with roughly five minutes of normal time to play when the hosts tried to hold the ball up by the corner flag to play for time.

That tactic was thwarted by Williams, who was once again the driving force in midfield for Liverpool, pressing forward looking for an opening while also getting back well to cover the back four.

In what was almost the final kick of the game, Murray unfortunately conceded a penalty. Stout guessed the right way and got a hand to Remi Allen’s spot kick but couldn’t prevent it from finishing up in the back of the net.

Liverpool’s attention now turns to Wednesday night as they begin the defence of their Women’s Super League title. Newly promoted Sunderland Ladies are first up for the Reds with kick off at 7.45pm at the Select Stadium, Widnes.

Entry is £5 adults, £2.50 concessions and free for Anfield season ticket holders. The game will also be live on BT Sport.

Player of the match: Fara Williams