PAISLEY 1979 v DALGLISH 1988: WHICH LIVERPOOL SIDE WAS THE GREATEST? 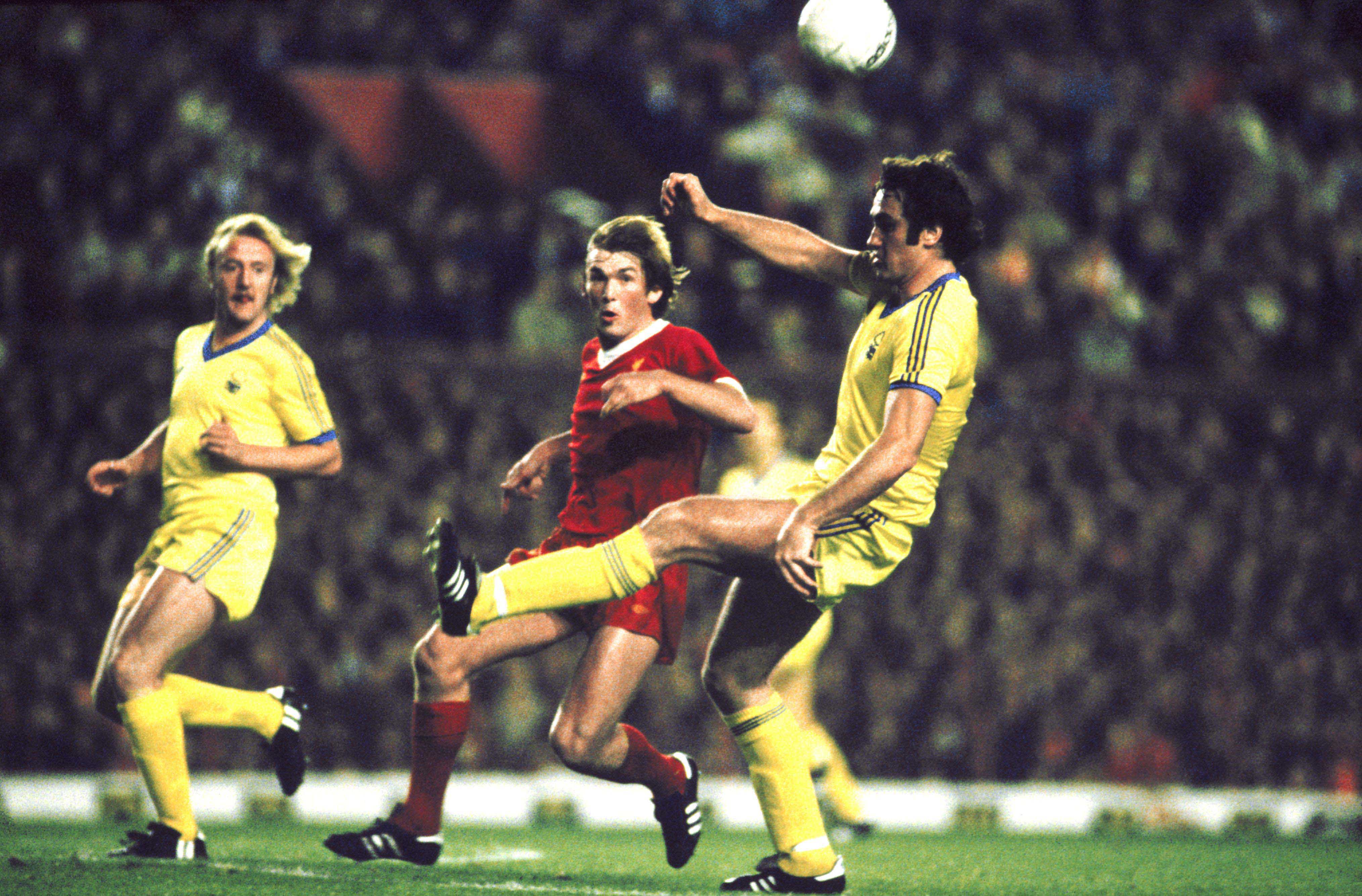 They’re right to. It was a joyous time to be a Red. The double was still in the memory and we made two enormous signings the previous summer to go alongside John Aldridge and the curious Irish-Scottish crossbreed of Ray Houghton, who followed in the autumn.

We went 29 games unbeaten from the start of the season and the goals came from all over the park. Ian Rush’s departure did little to dent the optimism and when Steve Nicol put six away in six games — including a hat-trick at Newcastle — you knew that the season was going to be something special.

But I don’t think it was our greatest ever side.

This is where football entwines with life experience to colour opinion. I was 18 at the start of that season and it will always bring back memories of packed grounds, Macs and the Mardi, and A-Level essays. But it wasn’t my favourite season. It doesn’t come close.

I give you the 1978-79 title winning side — the season Liverpool wiped the floor with the world.

I was only 10, and a couple of years away from making my Anfield debut thanks to my Dad being a) made redundant from the docks and b) a Blue. We had to make do with Gerald Sinstadt on Sundays, ably assisted by the spoffle-haired Elton Welsby, Match of the Day on Saturday nights, which also included Second Division games back then, and Radio 2 live commentaries from the great Peter Jones.

It was a great time to be a kid. Music started to creep into my life, shoving in alongside Star Wars and football. Prior to that the closest I got was my Dad’s copy of 20 Golden Greats by The Shadows and my Mum’s West Side Story LP, which had a two-inch scratch on side two, but things were beginning to get interesting.

The previous summer had all been about Grease or ‘girl music’ as it was known in our street but disco was dying out by degrees despite the best efforts of the Village People and Gloria Gaynor and I was all for that. No, now we had proper bands — something the lads in my class could get into that didn’t involve, horror of horrors, dancing. The Boomtown Rats , The Jam and The Police may belong on Radio 2 these days, unlike the footy, but it was a step in the right direction. Madness and Dexy’s Midnight Runners were coming up too while The Specials were the angriest band in the world. As angry as Madness were funny. At the age of 10, angry and funny are your favourite emotions.

listen to ‘Mike Nevin speaks to Neil Atkinson, Steve Graves and John Gibbons about the rivalry with Nottingham Forest’ on audioBoom

Things were progressing at Anfield, too. The foundations had been built under Shankly and we were now looking at new worlds to conquer. Liverpool were still the main force in Division One but had moved on apace over Paisley’s first three seasons — from European Cup wannabes to European Champions to double European Champions. The next step was to  equal Bayern and Ajax’s record of  three consecutive wins, but that dream was dead in the water by September thanks to our then rivals — yes, kids — Nottingham Forest. More of them later, but this was part of a two-year period that more than justified the ‘We Hate Nottingham Forest’ song.

There was little movement in the squad but that incredible year saw the last of Ian Callaghan in a red shirt. He joined Tommy Smith at the South Wales version of Liverpool — Swansea — while Alan Kennedy went straight into the first team. A young Kevin Sheedy joined too, making the greatest transfer of his life when he signed from Hereford.

Continuity was key. The midfield was established now Souness had a season under his belt and, in my opinion, is still the greatest ever assembled. McDermott-Case-Souness-Kennedy. People can talk about United’s 1999 midfield of Beckham-Scholes-Keane-Giggs as a candidate, and it’s not exactly shabby, but our side would just edge it. Look at the makeup. Three of them liked to put their foot in, two of them were possibly the hardest men in the League, three of them were graceful with the ball at their feet and all of them knew where the goal was. They amassed 37 goals between them and set up numerous others throughout that campaign, notably for one man.

If Kenny Dalglish had a dream start in his first season south of the border, he simply took the piss now. The stats will tell you that he scored 25 goals, 21 in the League, but that’s only a fraction of the story. Kenny Dalglish loved playing football and he loved playing for Liverpool. True, he’d whinge at refs throughout but every goal was celebrated like a pools win no matter whether it was the opener or a last-minute tap in in a routine win. He acted as though every goal was a surprise to him. The delight, the sheer ecstasy of scoring exploded across his face as he flung his arms high and ran at the Kop.

This was not an age of rehearsed celebrations or cool nonchalant fingers raised in the air (Kevin Sheedy’s speciality a few years later). After all, where was the joy in that? This was about entertainment as much as the win. It was about hammering the opposition into dust, knowing that we could do things that no other side could do. What’s more we had a laugh while we were about it. Kenny was a mesmerising dervish that season and was streets ahead of any other player in the country, so naturally the Player’s Player of the Year Award went to Liam Brady.

And the goals came. Everyone knows about the seven against newly promoted Spurs with their fancy World Cup winners but Derby took five with them back to the East Midlands, Norwich went for six while threes and fours became regular occasions. We were even treated to a 3-0 win at Old Trafford — a scoreline that took us 35 years to emulate.

The most significant game of the season came in December when the Reds faced Brian Clough’s side at Anfield. Forest had been poking us with a stick since they came up the year before, taking our title at the first attempt and cheating their way to a League Cup win the previous March. It had been that game that had really cranked up the rivalry.

It may be hard to believe now but the League Cup had become a big deal as it had gone from a ‘Mickey Mouse Cup’ — a demeaning term, conjured up  to scoff at Everton who were runners up in 1977 while we were chasing a treble — to being a bit of an embarrassing gap in the trophy cabinet. Liverpool should be winning cups — not lowly Aston Villa, Man City and Wolves. So when referee Pat Partridge gave them a penalty for a foul outside the box in the Cup final replay, it stuck in our craw. Here’s Tommy Smith being all nice and diplomatic about it.

Forest came to Anfield with a 42-unbeaten run, having already turfed us out of the European Cup, which they won, again at the first attempt, along with another League Cup. The championship was different though. There was no way they were going to get their feet under the table there. Two Terry Mac goals saw them off and although it was more of a statement than a passing of the torch, it pierced their armour sufficiently to weaken their domestic campaign. They eventually lost fewer games than us but finished with 18 draws in the League.

Liverpool marched on regardless. The defeats were irritating but were always little blips in the road. Andy King became Everton’s first Danny Cadamarteri and defeats at Ashton Gate, Highbury and Villa Park were the only times the Reds came back empty handed. The home form was simply incredible. P21 W19 D2 L0. F51 A4.  Going through a whole home programme while conceding just four is little more than a pipe dream these days. We dropped just two points at Anfield home all season. Incredible.

The title was done and dusted with two games spare thanks to a 3-0 home win against Villa under the lights. It was to be a record eleventh League Championship but, again, these are just prosaic stats that don’t go into the quality of the defence, the grace and grit of that midfield and the genius up front.

Of the 85 League goals we mustered, which was the best? Well, a split in TV rights meant that the BBC could only choose their ‘Goal of the Season’ winner from their own coverage so they couldn’t have McDermott’s glorious seventh v Spurs as their winner. They chose this instead.

And for the purposes of balance…

So what else happened that year? Well, we can draw a discreet veil over the FA Cup semi defeat to United at Goodison when both sides wore their greatest ever away kits, as Terry Mac’s missed pen and Ray Kennedy’s shot against the crossbar are still hard to take even now. The League Cup exit wasn’t quite as dramatic — a drab 1-0 defeat at Bramall Lane in the first round. Arsed.

What makes that season so great is the sheer dominance over the League. Of course, all champions have that but we absolutely pulverised all who stood in our wake. We were brilliant in 1988 too but it was art in ’79. Simply that. Art.

Cally may well have gone and severed the remaining ties to the old Second Division days but Liverpool were always looking at the next page. In April, a skinny lad from St Asaph made his debut for Chester City at Sealand Road in a 2-2 draw with Sheffield Wednesday. It was only a Third Division match and he was played out of position but soon his day would come.