LIVERPOOL: ALL JUST A LITTLE BIT OF HISTORY REPEATING?

WORLD-FAMOUS psychoanalyst Sigmund Freud once wrote a book called The Interpretation of Dreams. I’ve leafed through it, but there are very few mentions of football.

I had a dream on Friday night and being rather rubbish at being a bloke, I decided to tell someone about it. It was only in jest, but I informed them that my dream was of the Villa game, and we were losing 3-2 in injury time. I was watching it on the telly and tearing my hair out. I decided to flick onto another channel, where we were playing Ludogorets. It was 1-1, and then they broke through in the last minute and scored an incredibly soft winner. My heart exploded and I woke up.

In hindsight I realised that we probably lost both games because we were playing them simultaneously, even UEFA haven’t managed to balls up the schedule that much yet, but there was obviously something in my head trying to warn me. The return of the Champions League is a wonderful thing, but it evoked memories of the last time we were there. In 2009-10, both at home and abroad, we were suffering and losing games, looking toothless and limp in the process. However, it was only a dream. Any subconscious fear would be extinguished once I’d seen Balotelli and company destroy a defence that contained Alan Hutton, Philippe Senderos, Nathan Baker and Aly Cissokho.

What followed from Liverpool was a performance so flacid that I can only assume that the lads had been standing in cold showers during the international break, eradicating any of the momentum that the hammering of Tottenham created. Villa had that backline, we had £70m of talent in attack, and we mustered one shot on target. One. That’s one shot on target. At home. To Aston Villa. One shot on target. Against Hutton, Senderos, Baker and Cissokho. One… shot… on… target.

All of a sudden I was living my nightmare. It was like a sh*t version of Inception… which I suppose would just be Inception.

It was a different type of game, and we’re in a different time now, but what freaked me out most about the game was that it mirrored the subconscious fears of my dream. Fears I didn’t know I had. This performance reminded me far too much of the 3-1 defeat to Villa in August 2009. They were not a good team at the time, just like they aren’t now. This isn’t bitterness. Anyone who has followed English football in recent years knows that far more often than not, Villa are bad at playing football. They know how to get something from Anfield though.

That game happened in the last season we had Champions League football. A season where we were appalling in the Champions League, as well as in the league. It was a season that would ultimately cost Rafa Benitez his job. It was also, noticeably, a season following a second placed finish in the Premier League. 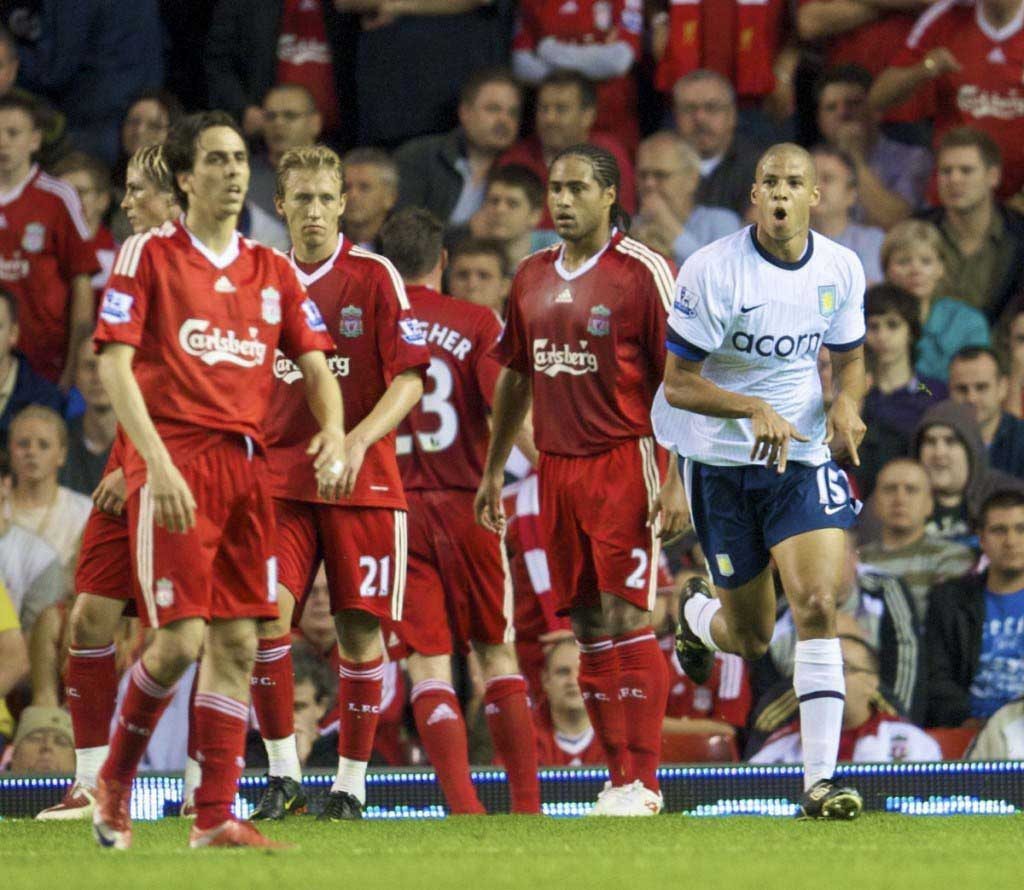 The most sickening thing about Saturday was, for all the goals we’ve scored in the past 12 months, for all the talent on show and the relative strength of the bench, once Agbonlahor’s toe poke rolled in, you kind of knew that was game over. The goal was so farcical that it was inevitable it would be a winner.

Which brings me to another point. Does it feel to anyone else that we are only capable of conceding daft goals? Perhaps it is just because you watch from a fan’s perspective and so you are immediately critical of your own guys before you give the opposition credit. However, remind yourself of all the goals we have conceded already this season. Try and remind yourself of the ones we conceded last year. Now try and remember ones where you went: “Fair enough, not much we could have done about that.” It doesn’t seem to take moments of class to score against this Liverpool team. The opposition merely has to wait for a mistake, and generally doesn’t have to wait too long, then just prod the ball in and run away with a look of faux amazement on their faces. There was not one single set piece on Saturday that Villa didn’t almost score from.

I may have oversold how sickening the inevitability of Saturday’s loss was after going 1-0 down. The very worst thing, the thing that made me scream into a pillow, go for a walk, avoid Match of the Day and all other football for 24 hours was that everyone who has been talking complete and utter b*llocks about how Liverpool will struggle this season, how they’ll ‘do a Spurs’, fall down the table without Suarez and with the distraction of Champions League football, how in spite of finishing above Chelsea last season they don’t have a prayer of touching them this campaign, well Saturday’s result, performance and the timing of it gave those people all the ammunition they could possibly need. It was like that moment when you tell your missus that the dog won’t ever be sick in the living room again, then hear strained chundering echo through the house from downstairs.

Time is a great healer, and given a day or so to think about it, I can now stop cursing the players and wishing a plague on their houses for making fools out of us. We dismissed the ‘doing a Spurs’ stuff out of hand, and in large it is nonsense, but we cannot overlook the fact that a team with so many new faces will take time to gel. The most noticeable part of Saturday’s sponge-like performance was that none of the attacking quartet looked like they’d ever been introduced.

“Hi, I’m Mario.” “Hello, mate. You must be the one the papers have been talking about. So you’re kicking that way, yeah?”

Something that the game magnified was the increasing regularity that teams are successfully playing the anti-football smash and grab for 1-0 away wins. Stoke did it to Man City two weeks ago and Chievo did it brilliantly to Napoli on Sunday. No interest whatsoever in doing any more than scoring a single goal and sabotaging the home side’s attempts to break through the cliched parked bus. Personally I hate it, but without it the gap between the small clubs and the big clubs would be far greater than it already is, so you cannot dismiss it. The signings we made were supposed to lessen the chances of that happening to us, and hopefully once Lallana, Markovic and the rest have settled, they will.

We had 75 per cent possession. That’s ridiculous. Even if we’d won 9-0, you would still be astonished at possession that one-sided. Think about that, 75 per cent of the ball in 90 minutes plus stoppage time means we had the ball for roughly 70 minutes. 70 minutes of possession, and had ONE SHOT ON TARGET!

On a slightly positive note, it felt a bit odd hearing the level of astonishment from people at the result. Not so long ago Liverpool losing to a sub-standard team at Anfield would be met with a response of: “What, again?” However, after last season, our home is once again considered a fortress, a place where people have to claw points desperately away from us by playing that anti-football. We have to make sure that the veil doesn’t come down like it did five years ago.

The good thing is that we only have to wait until tomorrow to play again. The best thing to remedy such a heartbreaking performance is another game. Unfortunately for the lads, they’ve put themselves under real pressure now. They have to make their first appearance in the top club competition in world football since that woeful 2009-10 season and not only win, but win well. A 1-0 win, such as the one experienced against Debrecen five years ago, will not answer any questions, more likely just add to them.

I was fuming just as much as Brendan after England’s carelessness saw Daniel Sturridge ruled out for three weeks. However, one thing I kept saying to others who were panicking was that if we need Sturridge to beat the likes of Villa and West Ham, then we have some serious problems. Balotelli needs time, as do Lallana and Markovic, but we cannot allow ourselves to let accusations of ‘one-man team’ come back, just with a different half of the SAS.

I spoke of it a couple of weeks ago post-Spurs. We look infinitely better with the diamond midfield. It was a warning against Southampton, but it is now a siren that is alerting all and sundry. Liverpool offer very little without the diamond. If Rodgers plays a five-man midfield then it is insanely easy to nullify the threat, especially with no Sturridge or Sterling.

Which leads me to tomorrow night. Do we use it to play a 4-2-3-1 again and try to get the team more used to a formation we may have to play at stages again this season? Or do we simply admit that we can only be the force we were last season with a diamond, therefore with two up front? Do we have to start Rickie Lambert or Fabio Borini alongside Balotelli?

What is for certain is that this Liverpool squad needs to figure out what it is and soon. I would love to think that Saturday’s performance was an unfortunate result of circumstance, that with Sturridge’s injury, a need to get new signings to gel as soon as possible by throwing them all in, by playing against a manager whose coaching manual is titled ‘How to get something from Anfield, but probably nowhere else’, this all led to a horrible conclusion that saw Nathan Baker named man of the match (oh the humanity!).

The loss at City was disappointing and raised questions, but this defeat was a ring-enhanced slap across the face and a middle finger from that devil on our shoulder. Brendan Rodgers, you need to make sure that this was merely a hiccup, a one-off like Southampton was last season, or this could all unravel astonishingly brutally and quickly. Just ask Rafael Benitez.

It’s a good job I waited a day to calm down or this piece would have been rather negative.

Tonight, I intend on dreaming about driving a Lamborghini with Shakira in the passenger seat, a crate of beers in the back seat and derby tickets in the glove box. Oh and an 8-0 win over Ludogorets.