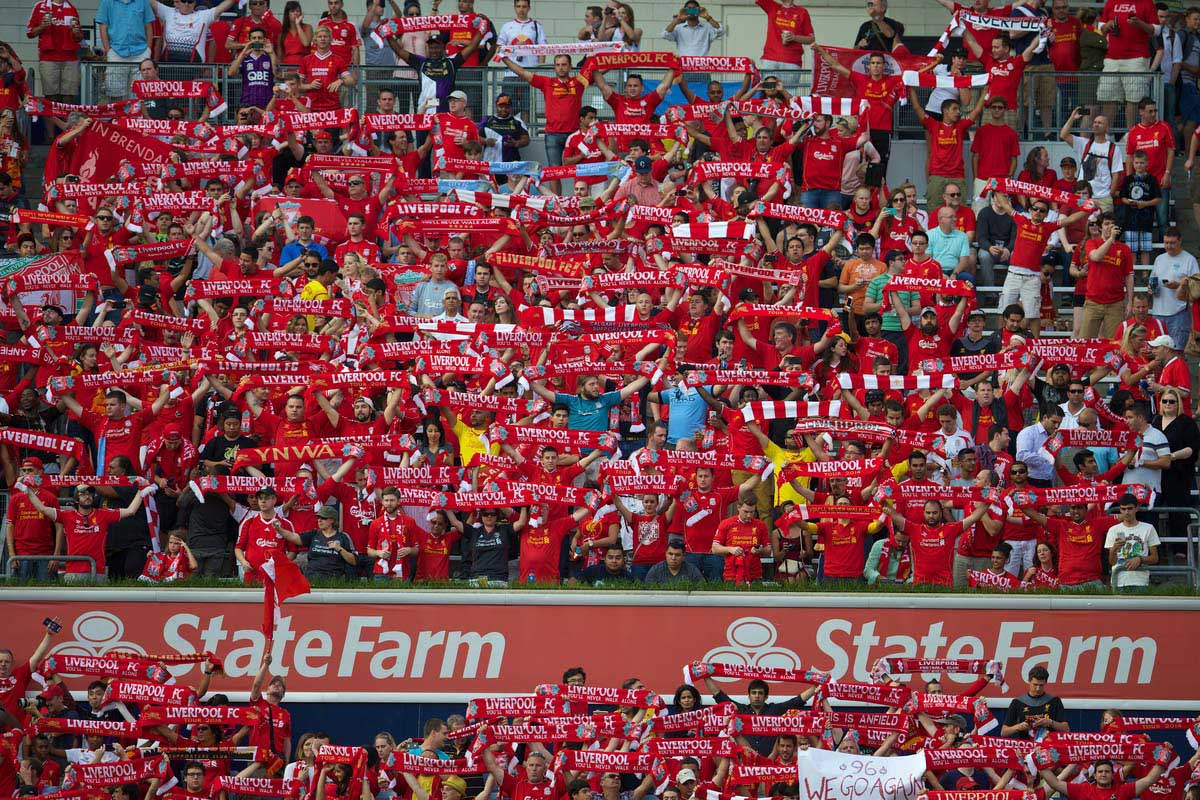 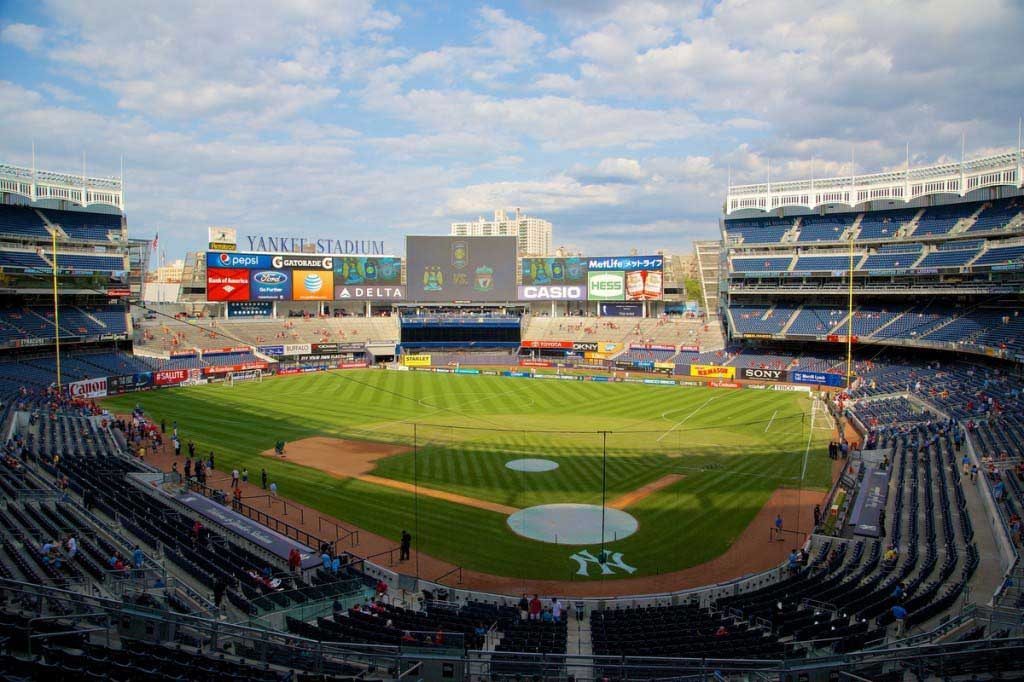 ICONIC: The Yankee Stadium before the match between City and Liverpool. Pic: David Rawcliffe-Propaganda

REY MASHAYEKHI was at the Yankee Stadium for Liverpool’s penalty shoot-out win over Manchester City.

“Hey Xabi, you know which train we gotta take?”

The man on the platform, identifying me by the “Alonso 14” on my back, was draped in red from head to toe. With him were his wife and two young daughters, likewise covered in Liverpool gear. They had made the trek from Florida to see an institution that they, like myriad others standing in the sweltering Manhattan subway station, had adopted as their own.

“We already have tickets to the final in Miami,” he said once we’d boarded the train up to the Bronx. “Just in case we advance.”

Like many, I’m sceptical of the cottage industry that’s emerged around pre-season friendlies in this and other parts of the world. For all their posturing, endeavours like the International Champions Cup are, at their core, money-making enterprises geared toward capitalising on the honest passion and dedication of foreign-based fans willing to spend an inordinate amount of time and money supporting their clubs.

A good deal of my own scepticism is also based on experience. Two years ago, I sat in a half-empty NFL stadium, on a morbidly hot summer day in Baltimore, as Liverpool and Tottenham slogged their way to a 0-0 draw – a game notable only for Charlie Adam nearly taking Gareth Bale’s ankle off. It was the first time I saw Liverpool Football Club play football in the flesh. In my head, I’d had an idea of what that experience would be like – flags and banners, dreams and songs to sing. I came away sorely disappointed.

Two years on, I found myself on a crowded 4 train heading to Yankee Stadium to see Liverpool play City. When the contest was first announced earlier this year, I’d initially discounted the notion of sitting through another meaningless friendly in the July heat. By the time they went on sale in March, Liverpool had found themselves in the middle of a thrilling, majestic, ultimately heart-wrenching title challenge. We’d just gone to Southampton and beaten them 0-3. And so I ponied up $99 – £58.66, at the time of writing – for a seat in the Liverpool section at Yankee Stadium. That’s before taxes and surcharges. For a friendly. 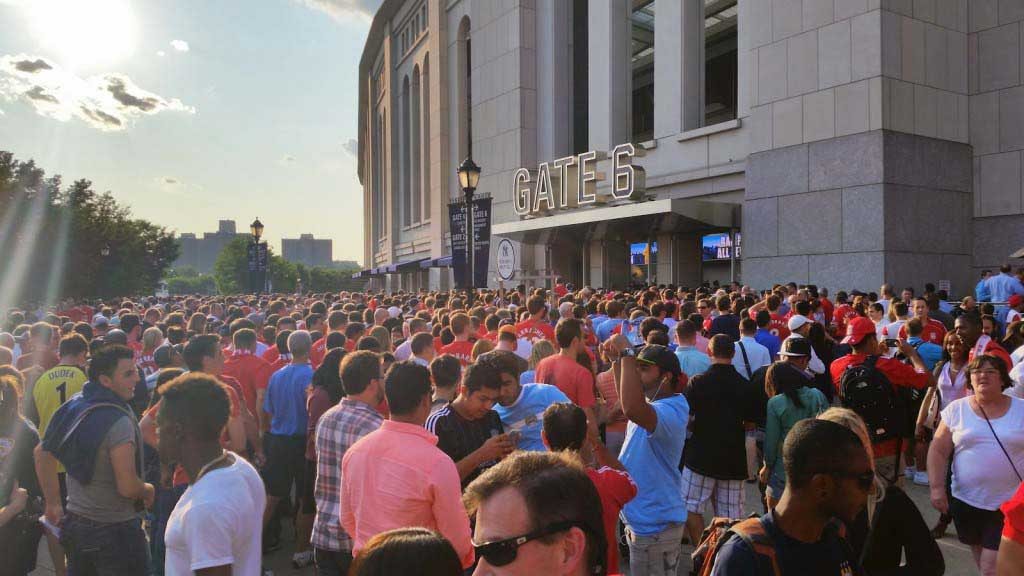 QUEUE WHAT A SCORCHER: Fans line up for the game. Pic: Rey.

I also grabbed a ticket for an old Liverpool-supporting mate of mine. He drove up to New York on the morning of the game, and we spent the afternoon traversing a stretch of East Village bars that LFCNY had deemed “Anfield Row.” Outside 11th St. Bar, the NYC-based supporters club’s home establishment, emanated a chorus of songs and chants. But there was also a queue, as the bar was already packed more than four hours before kick off. This is an establishment so popular in New York that Daniel Craig was notoriously turned away at the door. And so we made our way to another nearby, more spacious haunt catering to Liverpool fans where we slowly got sozzled while watching the 2004-05 season review.

Any reservations regarding a lukewarm pre-season turnout were dispelled by the time we got off the train at 161st St. Before us stood a mass of humanity queued to get through the Yankee Stadium gates. The attendance that night, as later announced, would be larger than any Yankees home crowd to date this year. I was instantly remind that this was a city that went mad for the World Cup this summer; that this was an occasion that drew entire families from Florida for the chance to see Liverpool play.

Once we had found our seats in the so-called Travelling Kop, it was clear that the City contingent was grossly outnumbered. Once You’ll Never Walk Alone began echoing around the cavernous stadium before kick off, it became apparent that this was more than just a friendly – at least for those watching. 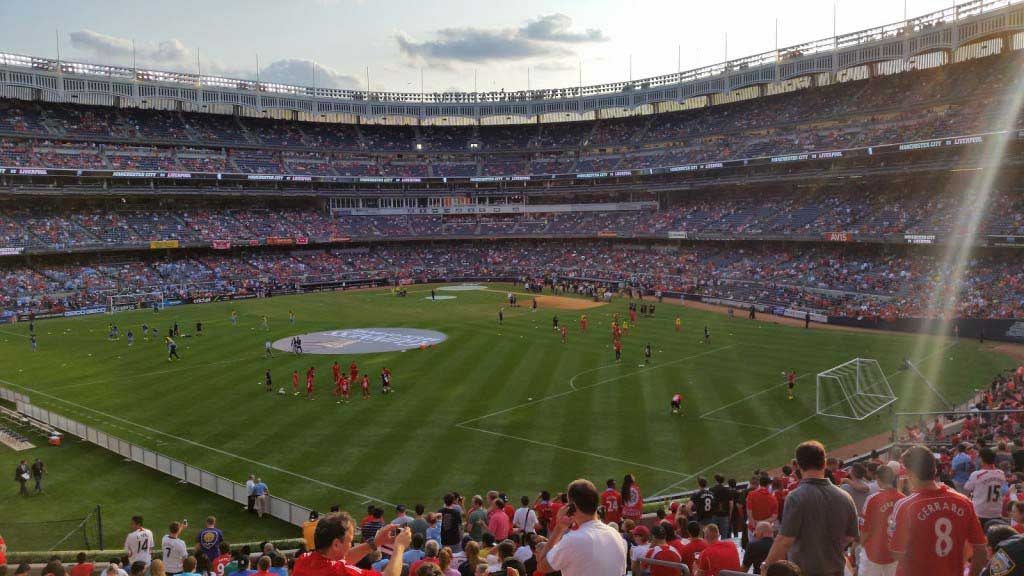 Don’t get me wrong, the match (in the first half at least) was pretty standard, friendly fare. The tactical details have been pretty well-documented at this point; Liverpool started out with the 4-4-2 diamond that served the team so well last season, though it’s hard to imagine a front two of Sturridge and Lambert being the preferred option against the likes of, say, City in the league.

Coates and Toure did well to start, before it all started crumbling at the back in the second half. Jordan Henderson continued to display superhuman levels of endurance, playing the full 90 in yet another pre-season contest (which I’m convinced is Brendan having a laugh). Jose Enrique was a rustier version of Jose Enrique, if you could imagine.

Seeing how it was a friendly, I won’t bore you with a play-by-play breakdown of how the second half unfolded – you’ve all seen it anyway. What I will say is that once Hendo tied it up with his lovely finish past Joe Hart, five minutes after Jovetic had opened the scoring for City, the entire atmosphere in the stadium shifted. The contest taking place on the field before us suddenly evolved into something more than a mere exhibition, and my only explanation is that the 48,572 packed inside Yankee Stadium – overwhelmingly in support of Liverpool Football Club – willed it so. 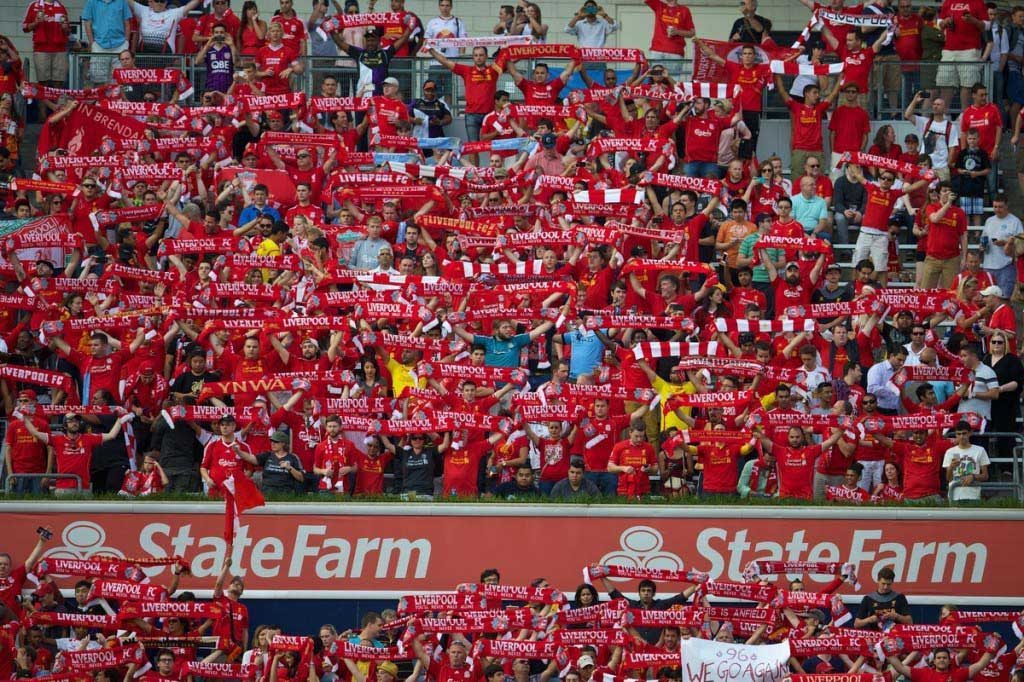 RED ALL OVER THE LAND: The support for Liverpool inside the Yankee Stadium was fantastic. Pic: David Rawcliffe-Propaganda

The Travelling Kop fully earned its distinction; never have I seen so many Americans, most of whom have almost certainly never stepped foot in Manchester, so utterly convinced that the entire place is “full of sh*t”. For the entire 90 minutes, sitting down in the Liverpool supporters’ section was simply not an option. Across the stadium, meanwhile, you could see the City section rising to its feet only as play approached. When the officials wrongly ruled Raheem Sterling’s would-be, match-winning curler at the death offside – an all-too-real reminder of Boxing Day at the Etihad last year – the combination of disbelief and vitriol that erupted was simply exhilarating.

After the penalty shootout – after we had serenaded Yaya Toure with a chorus of Happy Birthday as he stepped up to the spot, after Lucas Leiva’s winner ensured raucous celebrations well into the night – Frank Sinatra’s New York, New York began reverberating out of the stadium PA system as it does after every Yankees win. A strange choice, sure – but instantly recognisable to everyone in the crowd, and oddly fitting given the venue and victorious circumstances.

Of course, it wasn’t the chorus everyone really wanted to hear. As the celebrations flooded out on to the streets and many made their way to the trains, the bars surrounding the stadium were filled to the brim with those wearing red.

Inside the Yankee Tavern, Liverpool songs reverberated off walls adorned with portraits of baseball legends. Someone, either from behind the bar or on the jukebox, struck up You’ll Never Walk Alone and dozens of scarves were held aloft, and hundreds of voices sang along to every word. 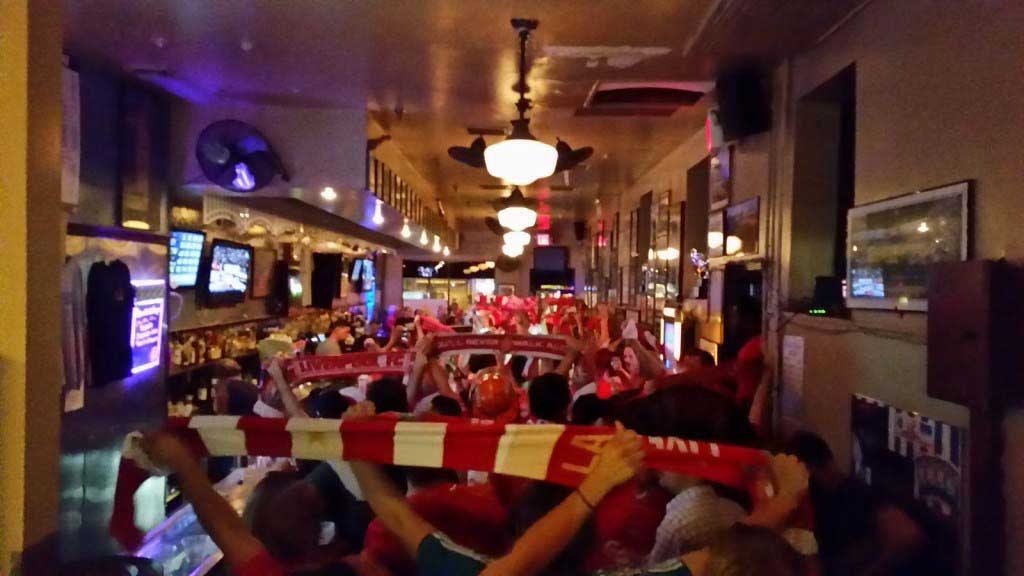 AND DON’T BE AFRAID OF THE DARK: Fans celebrate in a bar after the game. Pic: Rey

It was a great night for Liverpool fans as we head into a promising new season, and a brilliant night for football – or soccer, if you will – in this city and this country. And not bad at all for a friendly.