Confessions Of An Irish Wool

IT’S not easy maintaining your credibility with Scousers. Aside from us Irish, they’re the single most dedicated group of piss-takers I’ve ever enjoyed being verbally abused by. Over here, keeping each other in check is a way of life. The missing Eleventh Commandment was discovered in the wilds of Connamara, under a poteen-still – Thou shalt not be getting notions about thyself it proclaimed – and we denizens of the oul sod, being a devout lot, took it to heart. The faintest inklings of hubris, the vaguest sign of an un-checked ego and there’s always someone ready with a scathing put-down; a reminder that you might be the big fella now but I remember that day you cried when Tricia died in Emmerdale.

Suffice it to say then, that I was more than ready for the caustic Liverpudlian wit I’d grown up reading about, and I’ve revelled in the experience of it first-hand. The very first cab driver I hailed, all those years ago, was relentless – an expert in everything and utterly dismissive of any contributions I made to the one-sided ‘conversation.’ Once it emerged that I was one of the pilgrims over for the match, he was ruthless – each word dripping with the kind of condescension you don’t need a degree in anthropology to discern.

Gradually, as it emerged that I might actually have a vague notion of what I was talking about, Joe (we’re mates now) became less didactic in tone and more amenable to this visiting Irishman’s ideas on Liverpool Football Club; his football club; his city. We stayed parked outside my hotel for twenty minutes, debating the merits of Kevin McDonald as a footballer (few, said Joe) and the problems with David Moores as a chairman (many, said Trev) and I thought we’d made a real Hiberno-Scouse breakthrough until I was closing the cab door and he lobbed one last grenade as he drove away laughing. “Don’t they have a footy team where you’re from Trev?” Cheeky bastard. 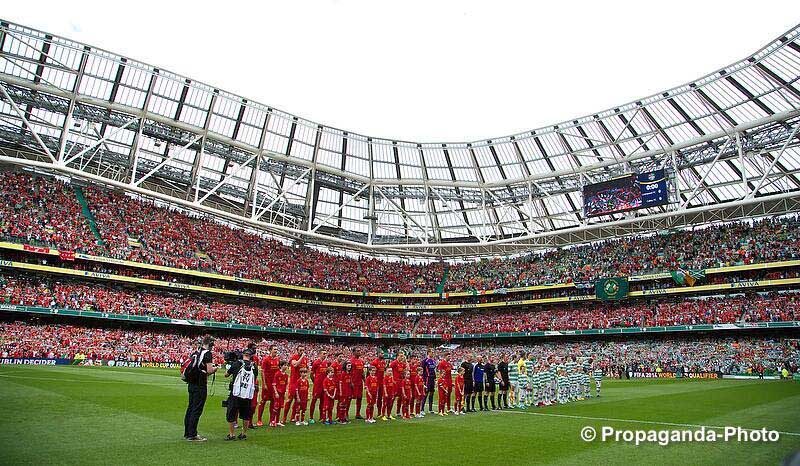 Joe’s closing dig has been thrown back in his face by me over the years, as he saw repeated evidence that I was not a fly-by-night, but as dedicated a Red as exists. Sadly, he wasn’t the only one who’s expressed his wariness of us Out-of-Towners and Day-Trippers over the years, and the battle to somehow earn the right to be listened to is one familiar to many opinionated and passionate Liverpool fans from Ireland to Indo-China. Those of us who can go the match, even occasionally, are the lucky ones.

In recent times, the proliferation of forums and fan-sites has allowed people to connect with like-minded souls irrespective of their location. Some of the most knowledgeable and interesting football folk I know are people I’ve encountered via the internet – people who view my limited annual attendance enviously, as they will probably only ever see Liverpool play via a jumpy stream at 5 am, whilst mainlining coffee and fighting off a cat or a toddler. The passion of such folk is inspiring and must not be dismissed. Their connection with the club is as valid as mine or any of the Liverpudlians I’m proud to know.

I recently wrote a piece looking at the much vaunted notion of the LFC Family. To be fair, both the notion and the term make a misanthropic old codger like myself feel mildly bilious, smacking as they do of some kind of cynical attempt to play on people’s heartfelt desire to connect with the club and the city. The whole #ALLOFUSLFC  campaign is cloying and cringey in the extreme, and the marketing nabobs whose ‘job’ it is to dream up the next bloody hashtag or slogan,  no doubt let out a little bit of wee as they watched the incredible passion of the fans in Jakarta, Melbourne and Bangkok. They may well flog some merchandise on the back of the newest empty-headed campaign but it won’t be because they told us that they came not to fucking play. It’ll be because the proud history and tradition of Liverpool Football Club has transcended societal and geographical barriers.

Neil’s excellent piece on Monday was a real rallying cry to those who’ve been less than joyous in their support in recent years. It was an easy trap to fall into. The dramatic fall-off in Rafa’s final season was jarring after coming so close the campaign before, but nobody could have predicted the impenetrable gloom that Roy Hodgson visited on Anfield. After giving it six or seven games out of a sense of fair-mindedness, I finally cracked. I’ve never been as angry in my life. There have been lads I’ve punched in the face for whom I felt more affinity than I did for Hodgson. Every match was a soul crushing procession towards the worst kind of mediocrity. It was not Utopia, it was dystopia, and it damaged the mindset of the fan-base badly. Travelling in those days, as the recession bit all of our arses, was a big ask, a massive ask, but travel we did.

The local lads next to me on the Kop are lovely blokes but they’re thoroughly miserable bastards. Lucas, Henderson, Allen – every year they’ve got a back to get on, and boy, do they fill their boots. During the Hodgson era, however, the lads were eerily silent. Everything was so monumentally shite that they were stunned into a kind of numb apathy, shorn even of the bleak joy they took from verbally brutalizing one of their own. Joe Cole wandered around, hands on hips, like some kind of pub footballer exhausted and content on the back of his one back-post run for the match, but nothing in the way of inventive invective emanated from two rows below me. I felt bad for them and threw out a few half hearted “You’re useless, you[s]” to help get the bile flowing again, but it was no good. Nothing. They were broken men. They’d been Hodgsoned.

Kenny’s second coming was what it was and warrants more analysis than can  be given here. The man is my only hero and the indescribable joy of seeing him lead the club in that oversized match-coat again would require some kind of epic poem for me to do it justice. Yet despite the return of The King, in terms of fan expectation, the bar had been spectacularly lowered. I remember being in the ground in early 2009, top of the league but dropping two points. I was consumed by the anxiety of my fellow Reds in the ground. Nobody was enjoying it. The misery was almost surreal. It wasn’t good enough. We were going to blow it. How we would relish that kind of failure in the campaign to come. Last season began with a manager hamstrung by a series of unfortunate events. As the campaign played out, Brendan Rodgers learned on the job. It was a painful process for him and for us, but something was changing. A little hope returning, perhaps? Something…

My brother and I were over for Lucas’ comeback game against Southampton in December. I enjoyed that one-nil win as much as any game I’ve been to. I’ve a ridiculous amount of man-love for Lucas and to see the lad back and playing well was tremendously gratifying. The best part of the trip was when Lucas turned to the Kop to gee us up. It was a beautiful moment, as the lad who’d been the subject of so much derision from that very source, now rallied us in support of the team, his team. I swear to your chosen deity, I was near to tears as I witnessed the two miserable bastards below me roar their heartfelt support of their former human piñata. “That’s why we like him, we like him, we like him / Infact we fuckin’ love him, we love him, we love him / Whoooaaooo…..” 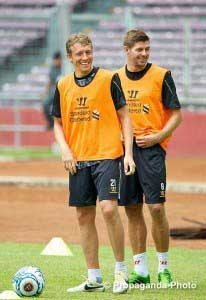 Lucas and Gerrard having a moment of fun (Pic: David Rawcliffe / Propaganda)

Yes, something was happening. It was slow and it was imperfect, but it was something – a laggardly ascent out of a dark era of despair and justifiable angst. The additions of Philippe Coutinho and Daniel Sturridge offered still more reason for abandoning the comfort blanket of pessimism and snarkiness worn by many on a match day. The trip to Liverpool was exciting again. As Ryanair threw the plane roughly from the sky onto the tarmac at John Lennon, we didn’t even notice. We were thinking only of our team. Could they knock in four again? How good was this Coutinho lad? Could Gerrard last a full season? Would Jose Enrique have sprouted a new hairstyle since the previous week? It was bloody fun again. It’s even more fun now. We’re done with the misery, even if Twitter does eat itself every time a Willian chooses Spurs or a Costa stays put.

Results may batter at my ebullience but they will not destroy it. I’ve noted that not only Neil, but fellow contributor Karl Coppack has adopted a similar attitude. Neil’s youthful effusiveness is one thing, but if two world-weary sorts like Karl and I can do it, anyone can. What else is there for it? We shall continue our regular pilgrimages across the Irish sea, my fellow wools and I, possessed of a real hope and a desire to simply enjoy the bloody football. Life’s a bastard, you take your happiness where you can and Liverpool Football Club, my friends, makes me happy.