Ever buy a book and realise half way through you’ve been given another one for free? 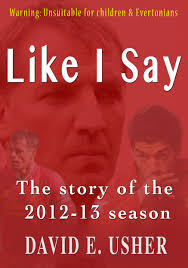 Dave Usher’s “Like I Say” is a bit like that. You set out thinking it’s a compilation of match reports and editorials from Dave, who as most know, is behind The Liverpool Way fanzine, and the site of the same name. But then a few chapters in you realise not only are you also getting a comprehensive review of the Premier League season from an ‘all club’ perspective, but you’re also getting little cues and memory triggers that take you back to the experience of each match, and each week.

When your writing a first hand account, it can go two ways, and as tends to be the case with Dave’s stuff, it goes the right way. It’s evocative, and it’s about his feelings in relation to developments. You read his account of the loss to Arsenal at home, and you can feel those feelings of frustration you felt at the close of last summer’s transfer window. You really can. He takes you back to it, and you can really empathise with the things he says.

Now, that’s not to say you’ll always agree with the finer points of his opinions on players – it’s rare you find a writer whose views will exactly correspond with your own on all fronts – but the comment is always balanced and fair, and it’s a far more thought-provoking book than you’d expect, from the state of punditry on our screens, to the behaviour of opposing fans to other opposing fans. This is a comprehensive stream of consciousness, built around a league season.

First hand accounts of games, when done well, really can take you somewhere as a reader. That’s Dave Usher’s forte for me. And it’s a good thing, because it constantly reminds us of the overall context. It’s easy to forget how, when we started slowly last season, or when we were defying reason and doing things like snatching defeat from the jaws of victory against Udinese, we were still showing tremendous promise. The book is replete with that kind of recognition – that of green shoots – and it’s the kind of thing you only get from a footballing eye I’d argue.

I think he falls just on the other side of results versus performances from me, but the difference is a cigarette paper’s breadth. I felt genuinely excited after the loss away at White Hart Lane late last year, for example, getting texts off one illustrious RAWK writer during the game along the lines of ‘Christ we’re playing so well’, to the extent that I ended the game feeling things were brewing, Downing’s ability at left back notwithstanding. Dave echoes that, albeit he has that die hard’s need for the win that’s palpable throughout.

The lows of Arsenal and Villa at home, and most notably Stoke away, are like depth charges, shaking your foundations in the run through to Christmas, where you’re taken back to a point where you think “right, we better see some decent reinforcements, because the minute Suarez is injured, or a side manages to marginalise him, or he just isn’t firing, we’re a pretty blunt instrument”. And then QPR away happens, and things start to flow a little better.

Then Oldham – urgh! – and then the successive away trips to the Emirates and the Etihad. Dave comments, “If you got points for playing well, we’d probably be top of the league”. And that was just it – the need to convert the quality of play into points started to really bite. But the team? Coutinho’s debut against Swansea the filling in a Zenit sandwich hinting at things to come, tinged with frustration again at how, with that tie in our grasp, we managed not to convert and progress in the UEFA Cup.

Hope and promise grows… and then Southampton away, and two 0-0s against sides we should have pumped, and we knew it. At every stage, Dave brings a balanced recollection of that roller-coaster, and when Newcastle away arrives, you get the chance to feel that new hope that Coutinho brought that day with Sturridge. It’s a great thing to be able to feel that again. I have the game taped, and still find myself sticking it on when I’ve had a couple too many drams on a Saturday night.

As an optimist who’s always looking for the upside, it’s the little reminders that help. The fact Joe Allen was so impressive early in the season. The fact Coutinho’s constant graft would see him run out of gas around the hour mark. A good strong pre-season and a corporate account at a decent butchers and you can see how things might improve.

And last but not least, beyond the superficial sideshows, there’s probably no other writer who can do Carragher this kind of justice, and it’s fitting the book ends on that note, with a tribute to the man from someone who really knows him.

Highly recommended. It’s a weighty tome that’ll take you a while to get through, but it’s a joy throughout.