Is it owner and out for Daniel Agger?

“It might be one of those situations where it’s not in Daniel’s hands, and it’s up to the owners at the end of the day.

“The manager has gone on record and said that every player has got his price, so we’ll have to wait and see, but of course if you ask me I want him to stay. I want all our best players to stay.” 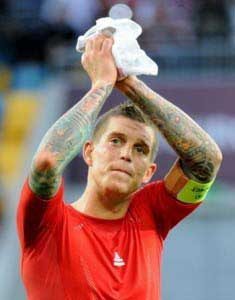 IF Daniel Agger is sold, it could be the vanishing point; the point where the lines of economics and football blur, converge and disappear into the sunset.

The ‘every player has his price’ line from Brendan Rodgers may well be true – but it’s not what fans want to hear. Especially when the player in question is a key one like Agger.

OK, he’s 27. Yes, he’s only made 119 appearances in seven years in the league. But regardless, he’s Liverpool’s most accomplished centre half, and one of the best in Europe as his performances at the Euros underlined.

Agger’s not just another defender. He’s a left-footed playmaker – a Rolls Royce of a defender and the type that aren’t readily available. That’s the reason Manchester City have offered what they have offered. He’s an influential proven Premier League performer. He provides balance in the Liverpool defence and his presence lifts the performances of players around him – especially Martin Skrtel. When those two are in tandem at the centre of defence, the back four looks settled and confident. That’s a base to build things on – why undermine it?

Also, despite being labelled a crock, it was only the 2007/8 season when Agger’s appearances in a season for club and country have dipped below 30. Then he managed just eight through injury. Last season it was 39, the season before 42, 32 in 08/09 and 49 in 06/07. The last two seasons Agger has played more games than Steven Gerrard. Would the club consider selling the skipper if the right offer came along?

If Liverpool take the cash – and the ecomomic model Fenway seem to be following certainly suggests they will – will Brendan Rodgers end up with an adequate replacement of the same standard? And if that player exists why haven’t City bought him?

Or will it be another young player – a player liable to make mistakes, a player that might grow into the role eventually but isn’t ready for the here and now?

Any player will need time to settle and time to build an understanding with the players around them. Frankly, with the first Premier League match a week away, Liverpool don’t have that time. The Moneyball/Soccernomics/Lyon approach makes a lot of sense but following the model so rigidly that it allows one of your best players to leave the club in his prime when the team is in transition doesn’t. The key is to have a younger back-up knocking at the door when the time comes to sell your top player.

The back ups already on the books just don’t pull the strings like Agger does. The jury is still out on Sebastian Coates (21), Martin Kelly (22) is a prospect but inexperienced at centre half at the top level and Jamie Carragher (34) is at the wrong end of his career and with an entirely different style to Agger.

Selling Agger just seems like creating another problem for a new manager who already has plenty on his plate. Liverpool need less problems, not more.

Tellingly, the manager has said he wants to him stay. The player wants to stay. Yet Gerrard – with the quote above – is hinting that it is the boardroom that want to sell up if the price tag is met. Is £25-£27m THAT much? Cynics would say it’s just enough to cover the fees for Fabio Borini and Joe Allen…

And once that cheque is banked, won’t Liverpool suffer from the same age-old problem that has plagued them through the eras: clubs will know there’s money to be spent and a squad to be improved and prices will be ramped up accordingly when Liverpool come knocking.

It could be a false economy. Agger seems a perfect fit for what Rodgers is trying to do with the side and Liverpool have made the mistake many times in the past of opting for numbers in the squad rather than quality on the pitch. Yes, that fee for Agger could bring in two or three players. But how good will they be from the get go? How influential will they be by the end of the month?

There’s also the PR aspect. What message will selling Agger send out? That an economic model is triumphing over football sense? That Liverpool’s players are ripe for the picking? That the club can no longer bat away offers from modern football’s ‘big boys’?

In this instance, football should triumph over economics.