INTERVIEW: DAVE HILL ON BARNES, SUAREZ AND RACE IN LIVERPOOL

I DOUBT I’m alone in feeling not just delight at Liverpool’s comfortable FA Cup win over Brighton, but a certain measure of relief.

For the first time in months it felt like the game was free from subtext, that Liverpool’s number 7 was a footballer rather than a media sensation made flesh, that the sting had been drawn from much of the bitterness and rancour surrounding the club in recent weeks and months.

This, I assume, is what people have meant by all concerned ‘drawing a line’ under the Suarez row.

We get football back, we get to focus on at least one cup final to come, we get to read a LFC match report without handshakes, Rioplatense Spanish and Patrice Evra being mentioned anywhere.

Most parties, the FA included, seem happy to let the issue rest now Liverpool have issued a few apologetic statements. Everyone can go on making money, Suarez may or may not remain a Liverpool player, there’s little else for the media to work with so the fire will dwindle to nothing.

On the one hand I’m glad, exhausted as I am with the whole thing. On the other it feels as if a golden opportunity could slip away if the process of ‘drawing a line’ is seen as closure, without any fundamental change for the better.

This doesn’t mean we should necessarily go on discussing Suarez/Evra in detail. The case was dealt with, punishment served. Personal lessons may or may not be learned. The micro-analysis of a single incident can only tell us so much.

While football as a whole should use the opportunity to introduce a comprehensive programme, an induction process if you will, in the rules and their interpretation for newcomers to the English game, for Liverpool FC the affair could be a wake-up call when it comes to its own community relations. Suarez/Evra can be a referent without having to be the focus.

One of the most telling contributions to the debate came in The Anfield Wrap episode 29, when youth worker Earl Jenkins spoke about the sense of alienation many fans feel from the club.

When ticket prices take them beyond the reach of most of the city’s young people, perhaps this process is inevitable.

Intentionally or not, it discriminates disproportionately against Liverpool’s non-white population. The gentrification of the club, of the game as a whole, has served to keep out traditionally excluded groups even as PR campaigns such as the laudable Kick It Out seek to have the opposite effect.

So what’s to be done? There are no easy answers, but any Liverpool fan interested in the issue and its historical antecedents could do worse than to pick up a copy of Out of His Skin: The John Barnes Phenomenon by Dave Hill. 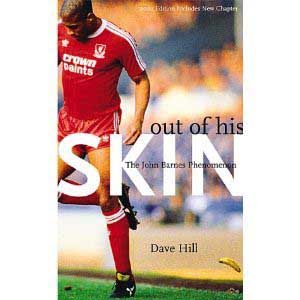 Setting out to explore the impact of Barnes’s move to Liverpool and what the reaction exposed about racism in football and on Merseyside, it was given a mixed response by fans on its publication in 1989.

Many saw its expose of racism on the terraces, and the club’s often lax approach to tackling it, as a direct challenge to Liverpool FC.

Others appreciated the book’s honesty and the thread of affection for the club, city and Barnes himself which ran concurrently with some bleak assessments of the state of our society and our national game.

The reaction of former chief executive Peter Robinson was ‘“when some­one throws a brick through your win­dow, you don’t invite them in for a cup of tea”.

This time round, perhaps the club should be more ready to see criticism of its community relations not as some form of vandalism, but as a useful tool in helping build a sustainable Liverpool FC for all its fans.

Dave was kind enough to answer some questions about his book, the reaction it provoked and the parallels and differences between then and now.

SG: In your 2001 essay From Barnes to Camara: Football, Identify and Racism in Liverpool, you identified the signing of and reaction to John Barnes in 1987 as ‘dramatising submerged racial issues on Merseyside and in English football at large.’ To what extent do you feel this dramatisation was helpful in changing attitudes both in Liverpool and more widely?

DH: It’s hard to precisely quantify the impact of Barnes’s signing, of course, but no one can doubt that his very presence and the reactions to it brought the issue of racism to the surface. It could no longer be ignored and could no longer so easily be dismissed as “just banter” or the same as making fun of someone for being red-haired or a bit overweight. It began to be talked about, not just on the street but in the media too. People who’d been repelled by racism in football for years or who had perhaps just felt something was wrong but couldn’t articulate it found their voices. That had to be beneficial. Black players too felt they’d been given a kind of permission to speak about an issue they had previously felt bound to keep quiet about for for fear of the consequences.

SG: Seemingly every piece written on this issue has included an obligatory paragraph along the lines of ‘football has taken great strides in this area’. Has it? Writing in 2001 it felt as if you were unconvinced that the real root of the problem had been tackled sufficiently.

DH: Black players have become so established in English football that dressing room racism was bound to be eroded, as were the prejudices of “old school” managers. This, and the recognition of terrace racism and the introduction of sanctions against it had the effect of establishing a taboo. All this is good. But while I think there has been change for the better the worry remains that some of the bad stuff just goes underground rather than disappearing altogether. I think football needs to remain vigilant.

SG: Is there scope for the Suarez case to become a positive turning point for Liverpool and for football in general?

DH: I think the useful by-product of the extremely messy Suarez affair is that it has reminded people that there is still an issue and that it needs to be addressed. It would interesting to know if Suarez had been told on his arrival in England that certain things that might (according to some accounts) be thought normal in Uruguay are not acceptable here and why that is the case.

SG: Were you surprised by the reaction to Out of His Skin from the club and fans? Reading it back today it seems incredible that such a clear-eyed examination could be treated so dismissively.

DH: I think the club probably thought it needed to defend itself but also didn’t really “get it” about racism in football or indeed in Liverpool as a city. Those were different times.

SG: In 2001 you wrote that Barnes, having inititally been dismissive of the book, had suggested he might one day read it. Any news on that score?

DH: I imagine it was important for him at the time to play down the significance of the book and disassociate himself from it, and I understand why. I don’t know if he ever read it. I just hope he appreciates that the book’s intentions were good and that he emerges from it pretty well.

SG: In recent weeks Barnes has acted as an unofficial spokesman for Liverpool’s approach, generally articulating the nuances of the situation better than the clumsy statements coming from Anfield. Are his clearly-expressed views on race and willingness to speak on the issue surprising to someone who observed his sometimes reticent approach in the 1980s?

DH: I haven’t followed the story all that closely – busy with other things – so I don’t know what JB’s been saying. However, he’s now in a very different position from the 1980s. He can speak freely!

SG: On the Anfield Wrap podcast recently, Liverpool 8-based coach Earl Jenkins touched on the enduring importance of Howard Gayle to the community. Howard emerges as something of a hero in Out of His Skin. What do you feel his experience at Liverpool tells us about the club and some of its traditions?

Buy Out of His Skin here.