MARRIAGE OF INCONVENIENCE: WHY I HATE THE FIXTURE COMPUTER

THERE’S a website called You and Your Wedding. If you’re lucky it’ll never feature in your life, but if it does, welcome to a hell the like of which Galatasaray’s most fervent supporters could only stand back and applaud.

The site’s forums are peopled by posters with enticing usernames like Mrsdaviestobe and Bridezilla17, all sharing their utterly pointless thoughts on their upcoming nuptials.

Active threads at the time of writing include ‘round vs long tables: which is best?’, ‘teeth whitening’ and ‘pretty bird cage for sale’. It’s basically Red and White Kop but with less Andy Carroll, more pictures of bouquets and endless, endless YouTube clips of Adele.

A key feature of the forums is the chance for brides (honestly, it’s never grooms) to spill out every last inconsequential detail of their big day after the fact, while others either coo their approval or bitch indiscriminately about the dress.

Every story is a self-indulgent bit of look-at-me idiocy from people seemingly unaware that their own inconsequential, brief period on earth will add precisely nothing to the sum total of human happiness or understanding. And they expect you to read it.

When we booked our wedding back in January, October 15 seemed a pretty innocuous date for it. No family birthdays around the date, it was outside the pricier summer wedding season and we still had a chance of it being sunny (as it turned out, it was).

If I thought about football at all I probably assumed it would be an international break or something. Anyway, we were getting married at 1 so a 3 o’clock or teatime kick-off would’ve been do-able with a bit of pleading to the new Mrs G.

Then the fixture list came out and I realised what I’d done. Liverpool v Manchester United, October 15 2011. 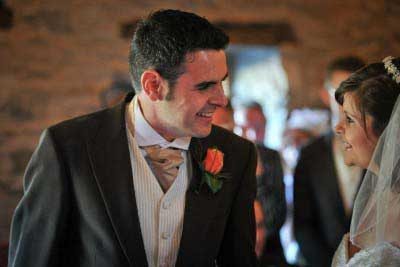 "Do you know if Gerrard's starting?"

Is there a fixture computer? An equivalent of Merlin or Ernie or Johnnie Five or whoever who I can put a name to? If so, I hate that twat.

For a while I clung to the fact that kick-offs had yet to be set by Sky, so there was a theoretical possibility we’d be playing on the Sunday as we did at Old Trafford last year.

It wasn’t to be. Saturday lunchtime it was. 12.45pm. My hopes dashed, my dreams denied (obviously not the dream of marrying my soulmate and spending our lives together and so on and so forth, but you get the picture).

12.45pm. An almost comically unworkable time. I schemed – oh how I schemed – but there was no way out. The registrar was booked. The biggest day of my life was going to clash with the biggest game of the season.

At this point I was glad we were having a civil ceremony, as any faith I had in a higher power would have been sorely tested.

And so the planning went ahead and the big day loomed ever larger. Discussions were held with ushers and best man over some form of mid-ceremony signalling/score relay system, but when the plot was uncovered (an usher replied in English when a bridesmaid wished him good luck), we knew the game was up.

The first half was a write-off, but intense negotiations secured the opportunity of post-ceremony phone-checking and regular updates during the drinks reception and photos.

I’ll be honest and say that throughout the ceremony I didn’t think much about the game. I remember vaguely wondering which player’s United career would be shortened by some blood-twisting Suarez humiliation, and a sudden wave of fear that I might mistakenly call my wife Kuyt instead of Kate. Other than that I was at least 92 per cent focused on getting married and that.

The ceremony done with, Pimm’s being served and glad-handing of distant relatives under way, I felt it safe to make a surreptitious phone check.

A scan of a few minute-by-minute reports reassured me I had, basically, missed nothing in the goalless first half.

The second was a blur of misinformation and confusion as various guests reported Suarez or Hernandez had scored. I eventually found out about Gerrard’s free-kick about 30 seconds before Hernandez cancelled it out, although in reality there was a 13-minute gap between the two. It killed the drama somewhat.

In short, then, if you’re planning a wedding or an imminent proposal DO NOT do it until the fixture list is out, you’ve assessed all the angles and allowed for the vagaries of police advice and Sky’s stranglehold on scheduling.